UPPER TAMAKOSI As If No Lockdown

As the country is under lockdown, Upper Tamakosi Project has completed one of the most difficult parts of the work, that is, installing the penstock pipe in lower vertical shaft. Constructed under Nepali investment and supervision by technicians of Nepal Electricity Authority, the construction work of 456 MW project is in full swing, awaiting completion by 2020 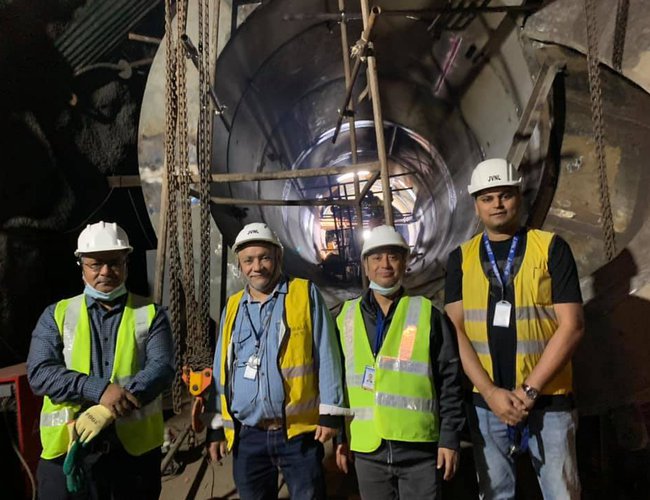 Taking risks, working in a naturally hostile situation in the ongoing pandemic of COVID-19, 456 MW Upper Tamakosi Project has achieved a major breakthrough. After installing a 373 meter lower shaft, the project is now backing on the right track awaiting its completion within 2020.

Although the project was delayed by two years, the project management has planned skillfully this time to prevent any disruption in the work after learning from past experiences like earthquakes and landslides.

Everyone is aspiring to see the completion of this mammoth project. Even Finance Minister Dr. Yubaraj Khatiwada expressed his high hope on the project completion. Announcing the budget, Dr. Khatiwada said the construction of the 456-MW Upper Tamakoshi project has so far witnessed 99.5 percent progress in terms of physical development.

Giving special priority to the energy sector in his budget, Finance Minister Dr Khatiwada expressed the hope that given the current progress the project will be completed in the upcoming fiscal year.

Management of the Upper Tamakosi Hydropower Ltd also has not been sparing any chance to work to complete the project. Following the announcement of lockdown on March 24, there was a rush for labor to go home all over Nepal. Analyzing the huge financial cost of obstruction in case of suspending the work during the lockdown, Tamakosi Hydropower Ltd decided to take a risk, making arrangements to retain the laborers to continue the work.

Initially, the local people and local bodies opposed the move of the project to retain the workers. The project convinced them that adequate safety measures would avert problems.

Although it involved risks, the decision to continue construction work keeping the workers safely inside the project paid as the project was able to install the most challenging 373m high Lower Penstock Shaft in the project.

The work of one of the most complicated works of installing 373m lower penstock lower shafts has already completed by Austrian Andritz. Installation of 304.8-meter upper Penstock Shaft (UPS) is now undergoing by Texmaco Railway Engineering of India, the original contractor of lot 2. It has already installed more than 230-meter penstock pipes. 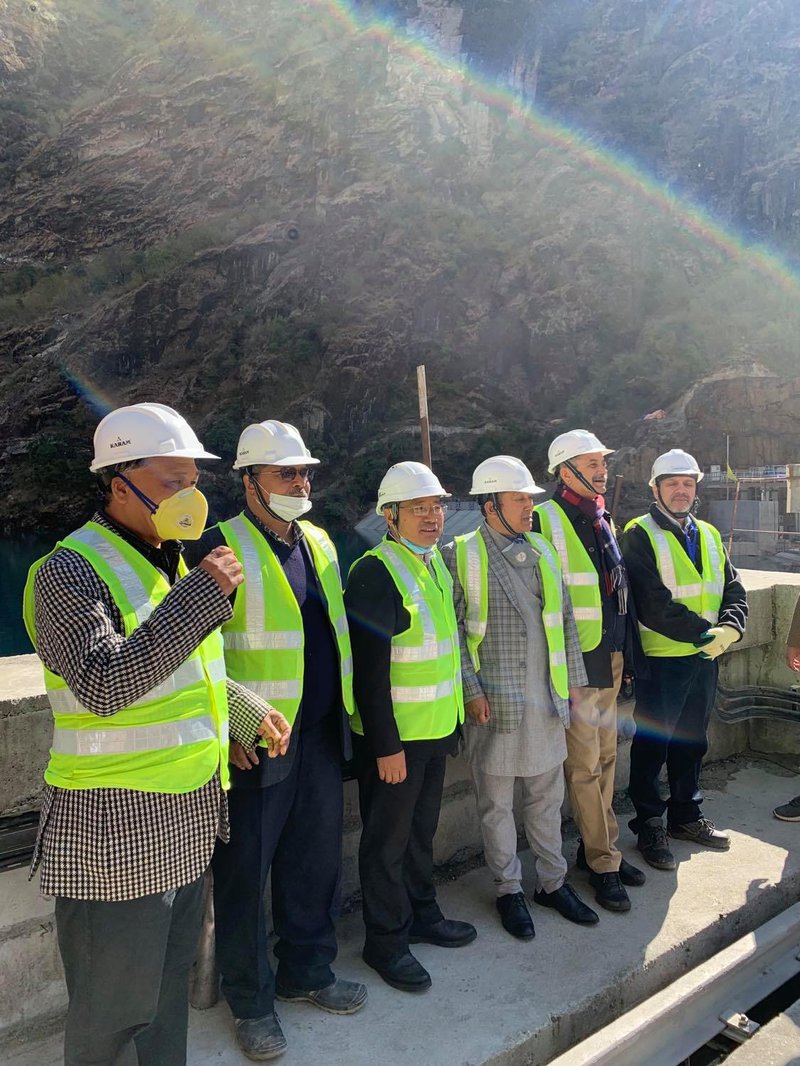 After delaying work by the contractor of lot 2, the half of work is given to Austrian company Andritz. The lower penstock is one of the highest vertical shafts in Nepal.

The contractor has already completed the installation of 373 meters pen-stock pipe in Vertical Shaft which is considered highly complex yet important work in the construction of the largest hydroelectricity project to be completed so far.

Despite facing several major natural hurdles and difficulties during the construction period, 456 MW Upper Tamakosi, Nepal’s first largest hydropower project, is close to completion now. If things go at the current pace, the project will start the generation of hydropower by 2020.

“The completion of the installation of high Lower Penstock Shaft is a major achievement. However, we have to follow all the technical requirements to complete the mandatory testing in order to assume the quality of the work,” said Bigyan Prasad Shrestha, Chief Executive Officer of Upper Tamakosi Hydropower Company, a subsidiary of Nepal Electricity Authority.

Having headed the company for a long time with highly competent and dedicated technical and managerial teams, CEO Shrestha, who has faced all difficulties caused by major disasters in the last five years, is satisfied with the current progress.

Backed by Managing Director of Nepal Electricity Authority and Chairman of the company Kulman Ghising, CEO Shrestha has worked tirelessly by mobilizing his entire team to achieve the project’s target.

After the earthquake and devastation of the road by the landslides, the project has already suffered heavily. At one point, some even raised the question of whether the project would complete. However, CEO Shrestha and his entire team’s dedication and backing from NEA and Ministry helped bring the project back on the right track.

The recent achievement is the result of all-out efforts made by the project management even during the lockdown. With support from all, the work to install the remaining Vertical Shaft continued in 456 MW Upper Tamakosi Project. 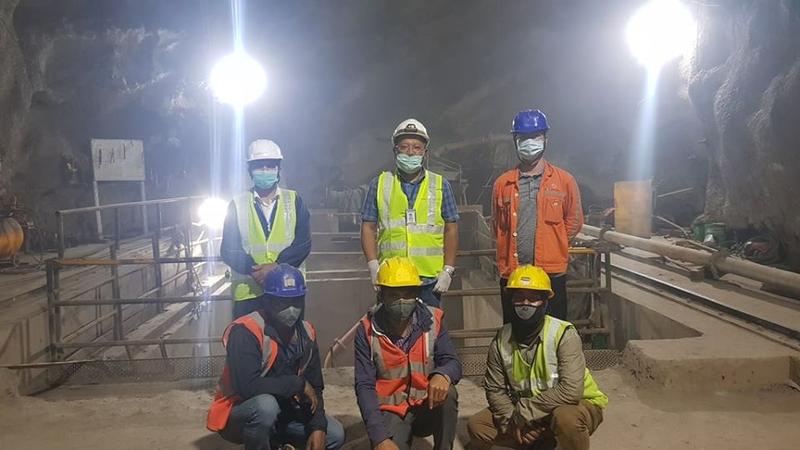 "If we walk, we reach (the destination) and if we work with motivation, we complete (the job)!"I am very happy on this historic moment of installation completion of the final piece of extremely risky and the most challenging 367m high Lower Penstock Shaft construction of this much-awaited Project. Probably, this is the tallest Vertical Shaft constructed so far in Nepal. Another 305 m high Upper Penstock Shaft will be completed within 40/45 days as there is a balance installation of 70 m (14 pieces) pipe,” said Bimal Gurung, senior engineer of Upper Tamakosi.

“Thanks to the excellent job performed by Andritz Hydro and Sino Hydro! Thanks also go to Texmaco who supplied the pipes. Congratulations to all involved” 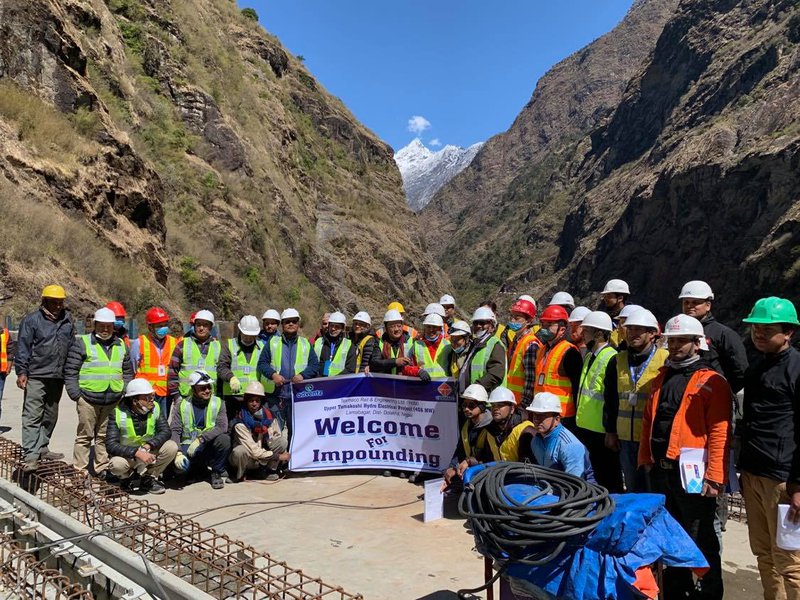 Although there are still some hindrances, the project team has high commitment now. “We are facing some difficulties to bring some important equipment and materials from outside Nepal. Once those things arrive at the Site, it will take some time for installation, construction & testing, thereby we will have some delays in the start of electricity production. Provided no further external major problem is encountered, our target is to start production from September/October this year,” said Gurung.

Following the prolonged delay in the work by original hydro-mechanical contractor India’s Texmaco Rail & Engineering Limited, some part of the work given to Austrian company Andritz with no cost escalation agreement with Texmaco last year. As per the agreement, the work has successfully completed fitting the penstock pipe in the vertical shaft.

The installation of a 246-meter penstock pipe in the 310-metre long vertical shaft by Texmaco has already completed. Dr. Neupane said that the remaining 64-meter work will be completed by the third week of July.

The first penstock pipe was installed in the upper vertical shaft in July last year. The 5-meter long 27-ton heavy penstock pipes are being lowered in the shaft with the help of the Gantry crane.

Most of the workers and technicians working at the site are Chinese, Italian, Indian and Nepali and they have been working there since even before the coronavirus outbreak in the country. As there is no risk of infection, the work is going on without interruption. 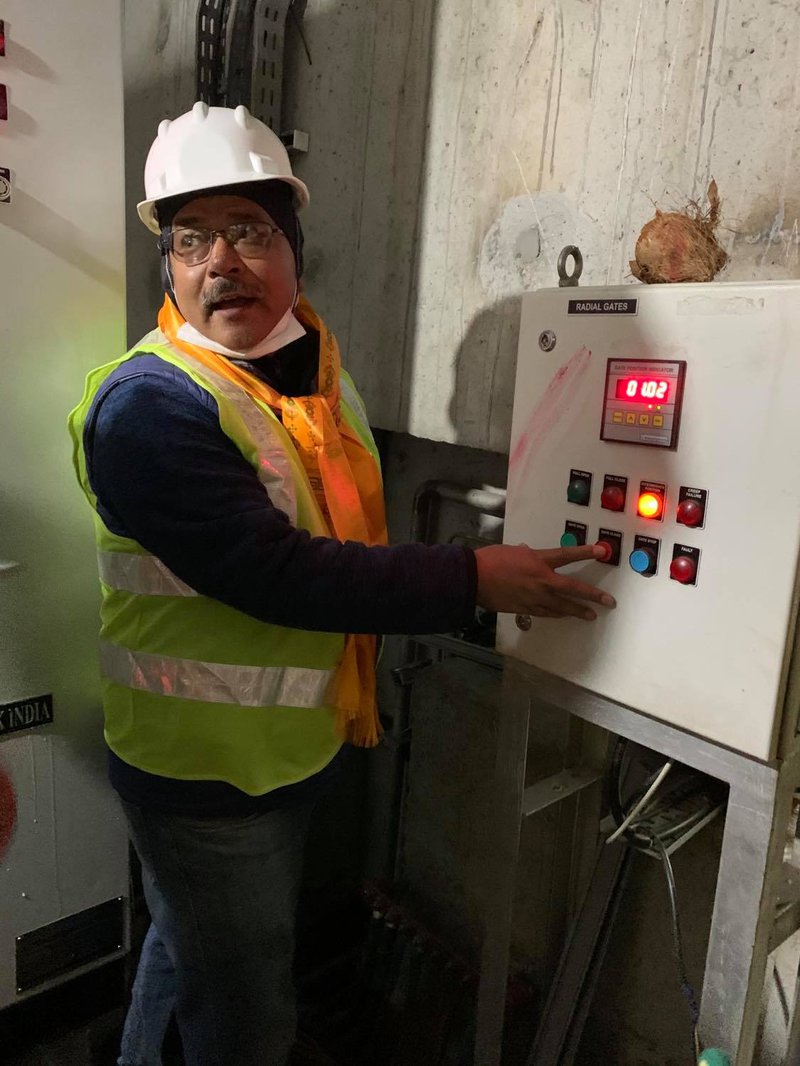 Dr. Neupane said that all possible safety and caution had been applied to save the workers from infection. Currently, more than 400 workers and staff are working on the project. Civil works are performed by Chinese Sino Hydro, electro-mechanical work is being done by Andritz, hydro-mechanical by Railway Engineering and substation and transmission lines by Indian company KEC.

KEC has already completed 220 kVA Double Circuit, 47.0 km (Gongar to Khimti Substation) Transmission line and the work of substation is at the final stage.

Upper Tamakoshi has successfully performed the test of dam and headworks. About 99.5 percent work in the project is completed. Concrete lining in the tunnel is about to finish and chemical grouting is underway at some locations.

The project was started about a decade ago and its earlier estimated budget of Rs 49 billion has reached Rs 72 billion with interest.

Delay in the work by the Contractor Company, earthquake, border obstruction, rising price of US dollar and interest of loan have caused cost overrun of the project. 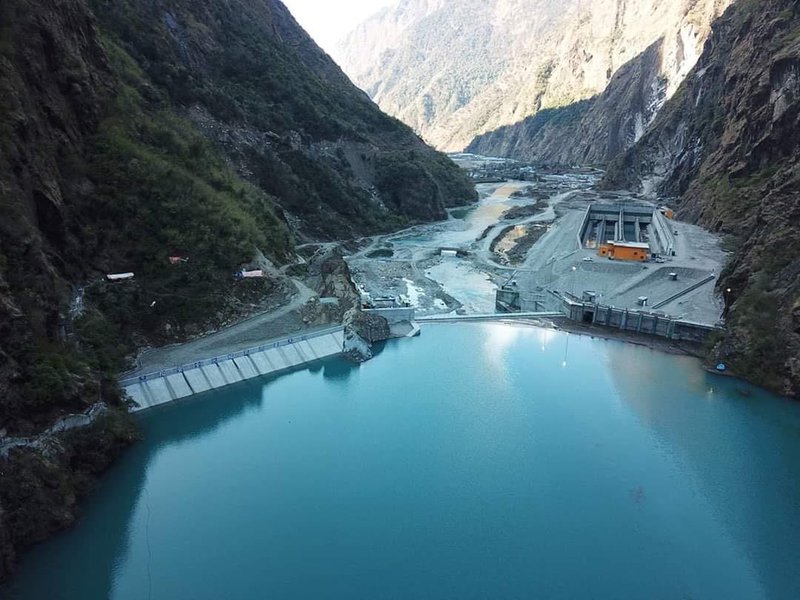 MD Ghising said that the prime minister and energy minister are very much concerned about the project and they want to see the generation from the first unit within the current fiscal year. He directed contractors to work as they promised within the agreed time frame. He also said that he is ready to facilitate necessary coordination and cooperation.

MD Ghising also expressed the satisfaction that the contractor of Lot 2 also accelerates the work.

Shrestha said that the grouting and concreting in the main tunnel are in the final stage. Similarly, the installation of gates in the Adit Tunnel of main has already been prepared. Similarly, the installation of equipment in the power station has already completed. The construction of 127 towers of transmission line and 47-kilometer transmission line has completed.

The civil work in 220 kV substations in Khimti is in the final stage and the installation of equipment in the substation is underway.

The project has been delayed due to earthquake, aftershock, landslide, flood, and disruption of supply during Madhesh Agitation, design change and slow work of contractor of lot 2. 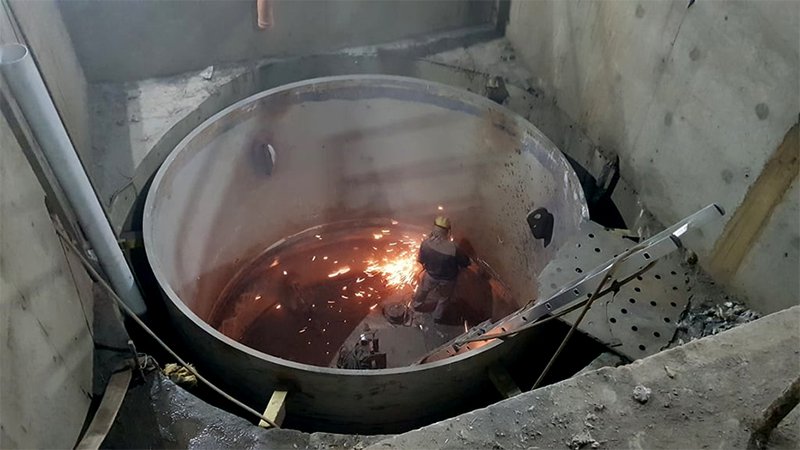 The government is all set to add 1,300-MW electricity to the national power grid of the country within the next fiscal year.

The 456-megawatt Upper Tamakoshi Hydropower Project (UTHP) has completed the necessary tests of its dam, headwork, descender, and semi-reservoir. The project has constructed a 22-meter-high and 60-meter-wide dam.

CEO Shrestha said that the grouting and concreting in the main tunnel are in the final stage. Similarly, the installation of gates in the Adit Tunnel of main has already prepared.

With the capacity to generate 2,281 GWh of energy annually, Upper Tamakosi will be a major game-changer in the power sector. After the completion of the Chilime Project, this is the second project constructed with Nepali investment and Nepali technicians. 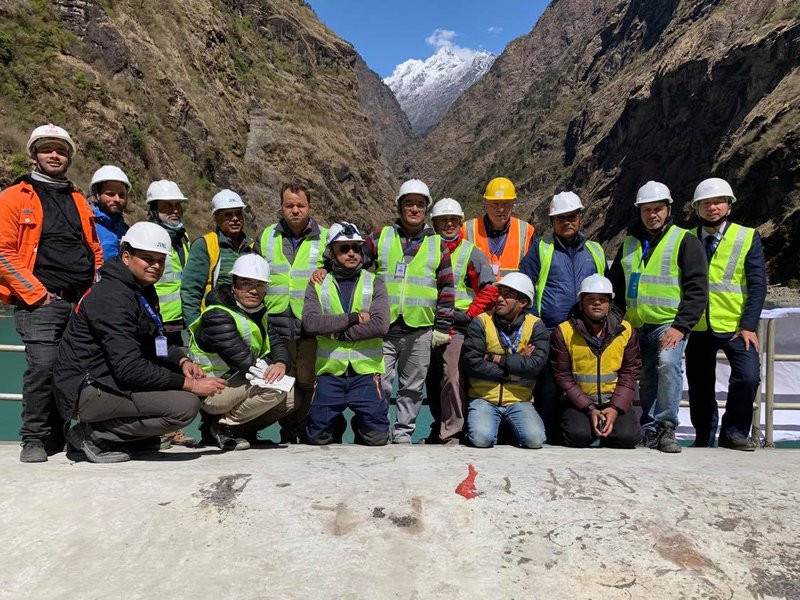