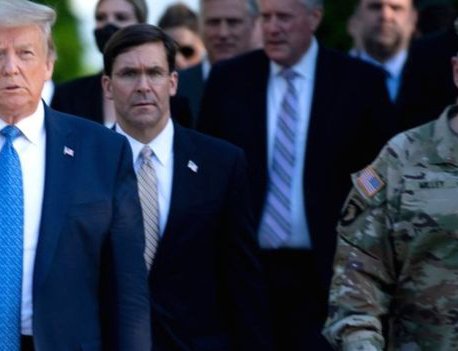 The top US military officer has apologized for accompanying President Donald Trump on a walk to a church after authorities dispersed peaceful protesters to clear the way to the site.

The demonstrators were rallying near the White House on June 1 following the death of George Floyd. The African-American man died after a white police officer pinned him to the ground with a knee on his neck.

But law enforcement officers removed the protesters to make way for Trump to move to the church and pose for photographers holding a Bible. Critics say the authorities violated the protesters' constitutionally guaranteed rights.

The Joint Chiefs of Staff Chairman, General Mark Milley, joined Trump on the walk to the church. On Thursday he issued an apology in a video commencement speech to the National Defense University.

Milley said his "presence in that moment and in that environment created a perception of the military involved in domestic politics." He added that as a commissioned uniformed officer, it was a "mistake" and that he has learned from it.

His remarks may further frustrate Trump as he tries to deal with ongoing nationwide protests against police brutality and racial injustice.

Defense Secretary Mark Esper did not support Trump's suggestion that federal troops be deployed to quell the demonstrations.