Prime Minister K P Sharma Oli, who had been very critical of India over the boundary issue, chose not to speak during the debate Saturday. 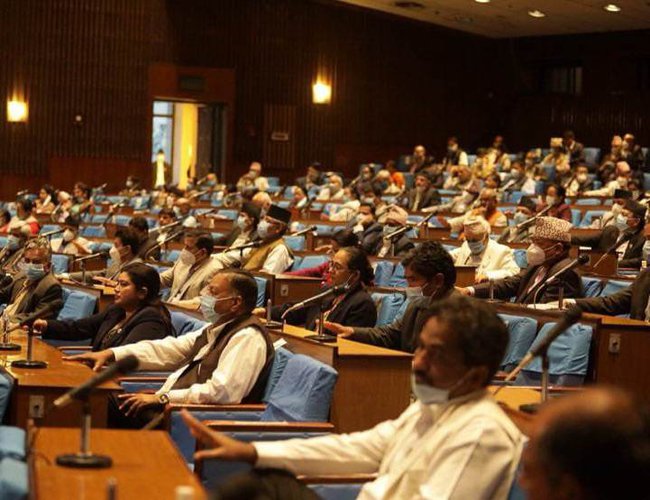 The Bill will now go to the Rastriya Sabha. No date has been announced yet for its tabling in the Upper House which is dominated by the ruling Nepal Communist Party.

Ignoring Indian objections to its territorial claims, Nepal’s House of Representatives, in a rare show of unanimity Saturday, passed a constitution amendment Bill to approve the country’s new map that includes Kalapani, Lipulekh and Limpiyadhura which figure in Indian maps.Read

The Bill will now go to the Rastriya Sabha. No date has been announced yet for its tabling in the Upper House which is dominated by the ruling Nepal Communist Party.

Prime Minister K P Sharma Oli, who had been very critical of India over the boundary issue, chose not to speak during the debate Saturday.

Later, Oli told reporters outside the House: “The first course is now over. And now dialogue with India will be the next course. I am happy about this unprecedented unity.”

Delhi’s response was frosty given that the two countries were now staring at a diplomatic crisis. Anurag Srivastava, the spokesperson for the Ministry of External Affairs, said: “We have noted that the House of Representatives of Nepal has passed a constitutional amendment bill for changing the map of Nepal to include parts of Indian territory. We have already made our position clear on this matter.”

“This artificial enlargement of claims is not based on historical fact or evidence and is not tenable. It is also violative of our current understanding to hold talks on outstanding boundary issues,” Srivastava said.

All 258 members present in the Nepal House of 275 voted in favour of the Bill piloted by Law Minister Shiva Maya Tumbahamphe.

While Speaker Agni Prasad Sapkota did not cast his vote, Samajbadi Janata Party’s Sarita Giri, a member of the Opposition, walked out of the House before the debate – her notice to annul the Bill was rejected by the Speaker.

While the outcome was a foregone conclusion given that both the treasury and Opposition benches were backing the Bill to reclaim land “encroached” by India, the parties appeared more conciliatory in their remarks about India.

Pushpa Kamal Dahal ‘Prachanda’, Co-Chairman of the ruling Nepal Communist Party and lead speaker during the debate Saturday, said the adoption of the Bill was not intended to increase distance with India, but to solve a long pending issue with its “cooperation”.

“We understand that most likely, it was not India’s intention to irritate Nepal when it published the map with these areas way back in November following the abrogation of Article 370 that made Jammu and Kashmir a new Union Territory.”

Dahal said history had bestowed a much larger responsibility to the Nepal republic to bring back territories lost under the monarchy.

This was immediately contested by Rajendra Lingden, leader of the Rastriya Prajatantra Party, who said it was ridiculous to blame the monarchy for the loss of territory. He reminded the House about the monarchy’s role in unifying Nepal. “My party and I, however, wholeheartedly support the Bill,” he said.

Leader of Opposition Sher Bahadur Deuba and most other leaders said the issue needed early solution through dialogue with India.

However, Prem Suwal of Kisan Mazdoor Party said Indian Prime Minister Narendra Modi was an ally of Trump and Nepali land remained captured territory as part of an imperialistic design.

Leader of the Terai-centric Samajbadi Party Upendra Yadav and Rajendra Yadav said while they ideally wanted other amendments to the constitution to ensure equal ownership and rights for people from all regions and ethnicity, they were supporting the Bill since it involved territorial and sovereignty issues.

Their party colleague, Sarita Giri, who walked out of the House before the debate, said her party had lost its relevance.

The government adopted the constitution amendment Bill, dispensing with the procedure that usually takes up to a month from the date of publication in the gazette.

EP DELEGATION Visit For Cause By A Correspondent 4 days, 20 hours ago