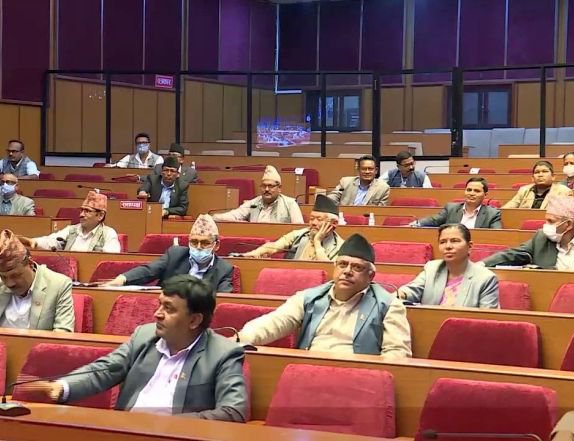 Moving the Bill, Law Minister Shiva Maya Tumbahamphe said it is a "rare and historic moment" for Nepal since Parliament is “solidly” behind the government in its attempt to reclaim territory currently under Indian “possession”.

Nepal fast-tracked Sunday the passage of a constitution amendment Bill to approve the country’s new map that includes Kalapani, Lipulekh and Limpiyadhura which figure in Indian maps.

The Bill, passed unanimously Saturday by the House of Representatives, was tabled in the Rastriya Sabha, the Upper House, where several members, while urging the government to “reclaim” the “encroached” territories, called for early dialogue with India.

Moving the Bill, Law Minister Shiva Maya Tumbahamphe said it is a “rare and historic moment” for Nepal since Parliament is “solidly” behind the government in its attempt to reclaim territory currently under Indian “possession”.

The passage of the Bill appears to be a formality given that 50 of the 59 members of the Upper House are from the ruling Nepal Communist Party. Members cutting across party lines have already backed the Bill.

Under the procedure for discussion and voting on the Bill, 72 hours is required for its maturity after introduction. But given the fast-tracking of the Bill, there is speculation that it may be sent Wednesday to President Bidhya Devi Bhandari for assent.

After its approval by the House of Representatives Saturday, Prime Minister KP Sharma Oli, who had been very critical of India over the boundary issue, told reporters: “The first course is now over. And now dialogue with India will be the next course. I am happy about this unprecedented unity.”

Delhi’s immediate response was frosty given that the two countries were staring at a diplomatic crisis. Anurag Srivastava, spokesperson for the Ministry of External Affairs, said: “This artificial enlargement of claims is not based on historical fact or evidence and is not tenable. It is also violative of our current understanding to hold talks on outstanding boundary issues.”

The Nepal Ministry of Foreign Affairs appeared to be waiting for the Bill to become law before responding to the Indian statement.

Opposition Nepali Congress and some senior leaders, including former Prime Minister Madhav Kumar Nepal, are said to be in favour of an early dialogue with India.

Dr Minendra Rizal, former minister and leader of the Nepali Congress, said this is no time to blame past rulers for territory loss or heap praise on any one leader – alluding to Prime Minister Oli – and the right move will be to hold an “effective dialogue” with India with the entire nation backing the government.

Meanwhile, Oli’s problems continue to mount. A meeting of the 9-member central secretariat of the Nepal Communist Party was called off Sunday morning.

The meeting had been called to iron out differences for parliament’s ratification of the Nepal Compact agreement with the Millennium Challenge Corporation – the agency’s grant is intended to propel economic growth and reduce poverty in the country.

While Oli has made adoption of the grant agreement a prestige issue, senior members including former Prime Ministers Jhalanath Khanal, Pushpa Kamal Dahal ‘Prachanda’ and Madhav Kumar Nepal have warned the government that it should not be cleared without modifications.

Meanwhile, there is no let-up in the protests on the streets. Youths and students held a rally in the Bouddha area on the outskirts of Kathmandu, accusing the government of turning a blind eye to alleged corruption in the purchase of medical equipment as part of Covid-19 pandemic measures.