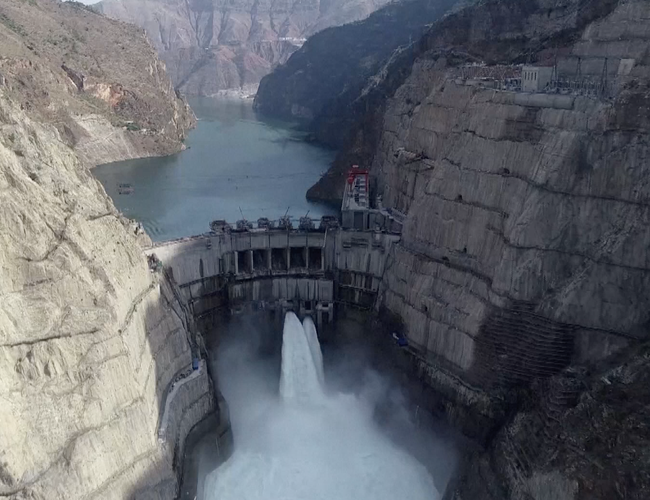 After a 72-hour trial operation, the first unit of the Wudongde Hydropower Station, China's fourth-largest and the world's seventh-largest hydropower project, was officially put into operation on Monday.

It's estimated that the amount of hydropower produced by Wudongde station will save 12.2 million tons of standard coal. The clean energy will be transmitted to China Southern Power Grid to help develop the Guangdong-Hong Kong-Macao Greater Bay Area and other areas.

The station will also serve as an important part of the Yangtze River Basin flood control system, as its reserved flood storage capacity is 2.44 billion cubic meters, equivalent to more than 170 West Lakes.

If overlooked, Wudongde Hydropower Station is like an eggshell stationed at the Jinsha River's V-shaped valley.

The double-curved arch dam has a maximum height of 270 meters, but its average thickness is only 40 meters, making it the world's thinnest 300-meter arch dam.

The eggshell shape is the best design considering the location, which can achieve the maximum balance between security and economic factors.

Thin as it is, the dam can block the river to form a reservoir that can store about 7.4 billion cubic meters of water.

The dam also marks the world's first to be fully built by low-heat cement.

In the valley area where the dam is located, the sunlight is strong with big temperature differences between day and night and low humidity. Under such an environment, it's difficult to prevent crack if ordinary cement is used.

The low-heat cement is relatively stable and can reduce the dam's temperature stress significantly, which effectively solves a global problem in dam construction.

The mountains on either side of the top of the dam are only 300 meters apart. Therefore, many of the structures – except for the 270-meter-high dam structure – are constructed in the mountains and underground due to small space.

The main workshop, which is the generator unit of the hydropower station, is located in the mountains on both sides of the dam.

Each side accommodates six hydroelectric generating units with a capacity of 850,000 kilowatts per unit.

The main workshop is as long as three standard football fields. It is 89.8 meters high, equivalent to a 30-story building, making it the world's highest underground power plant.

Chinese President Xi Jinping praised the Wudongde hydropower project the same day and called for more efforts to adopt a new vision for development and scale new heights in technology.