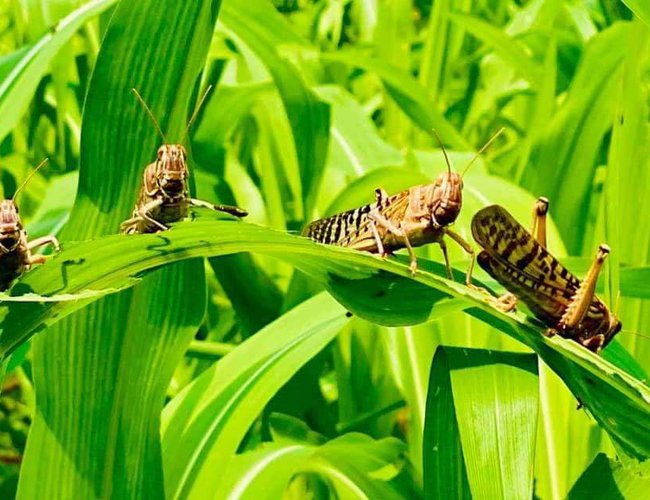 Days after their arrival in the southern plains, the locust swarm entered Kathmandu Valley and is moving towards east, said government.

Locust swarm was noticed in various parts of Kathmandu and control teams were deployed to eliminate the locusts.

According to information given by the Ministry of Agriculture, all the groups of locust swarms are being tracked by people and farmers. The locusts keep flying during day time and settle down only after dark in the evening. Ground control teams are constantly tracking them and will undertake major control operations once they settle down.

Swarms of locusts were spotted in Kathmandu skies as the day proceeded to dusk on Tuesday. Residents in Lainchaur, Samakhushi, Swayambhu, among other places in the capital city were reported to have spotted insects in large numbers.

The locusts arrived in a thick swarm and proceeded towards the south-western direction at around 5pm. Farmers of Pyuthan are worried after swarms of locusts were found in various parts of the district.

After the flying insects were seen in various parts of the district including Baraula, Arkha, Rajbara and Bandikot, the farmers have been driving away the locusts by making fire for smokes, informed Lal Bahadur Sen, a local of Rajbara.