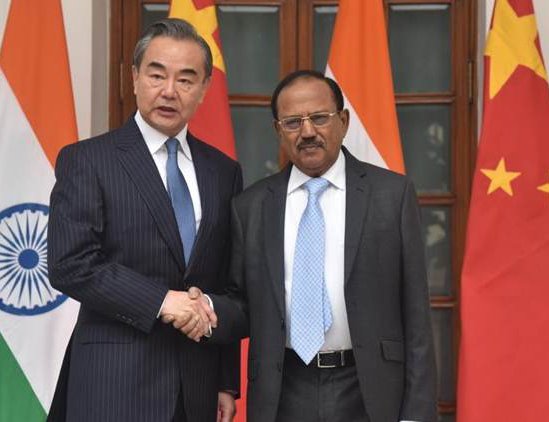 After a “frank and in-depth” conversation between National Security Advisor Ajit Doval and his counterpart, China’s State Councillor and Foreign Minister Wang Yi, on the standoff in Ladakh, both agreed that maintaining peace at the border is essential to further bilateral relations and that the two sides should not allow differences to become disputes. The two spoke over the phone on Sunday, the Ministry of External Affairs said in a statement.

The Ministry of External Affairs in a statement on Monday said: “They (Doval and Yi) agreed that it was necessary to ensure at the earliest complete disengagement of the troops along the LAC and de-escalation from India-China border areas for full restoration of peace and tranquillity. In this regard, they further agreed that both sides should complete the ongoing disengagement process along the LAC expeditiously.”

The two Special Representatives also agreed that the diplomatic and military officials of the two sides should continue their discussions, it said. Doval and Yi will also continue their conversations to ensure “full and enduring restoration of peace and tranquility” at the Line of Actual Control (LAC).

The SR-mechanism was explored even as External Affairs Minister S Jaishankar has spoken to Wang, in his capacity as Foreign minister. In India’s case, both Jaishankar and Doval are at the same level — both have Cabinet rank.

What is different on the Chinese side is that the Foreign Minister and the State Councillor (the Special Representative) is the same person since 2018.

Meanwhile, in the first signs of disengagement between Indian and Chinese troops in Ladakh, the soldiers of both sides have started moving back at PP14 in Galwan area. A similar movement from the two parties is also expected at the other two standoff sites of PP15 and PP17A in the Hot Springs sector.

The confirmation of troops moving back in the Galwan Valley and the Hot Springs came after The Indian Express reported Monday morning that there were tentative signs of a climbdown at some “friction points”, five days after the Corps Commander-level talks agreed on a step-by-step de-escalation. Under this, both sides were supposed to withdraw manpower and structures and verification was to be done by July 5.