Coronavirus deepens the risks for Nepali migrant workers in the Gulf 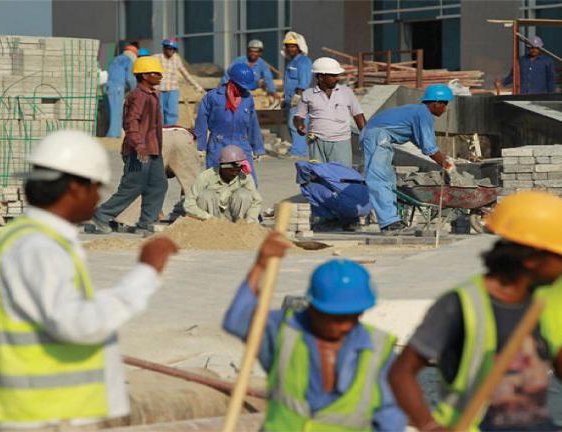 As COVID-19 spreads in the oil-rich Persian Gulf states, foreign workers such as from Nepal face high risks, low wages and exploitation. The COVID-19 outbreak is a health crisis they can't afford, and authorities and employers are providing little support.

With the request from Nepalese Embasy, Nepal has already brought over 20,000 Nepalese stranded in gulf countries, Myanmar Bangladesh, Pakistan, Sri Lanka, Malaysia, Maldives Australia, United States and United Kingdom through repatriation flights. But, there are many people waiting to come back Gul. The Ministry of Foreign Affairs has directed the concerned embassies to start their registrations.

According to estimates there are one million Nepalis working in Gulf countries. Saudi Arabia and Qatar have the highest numbers of Nepali followed by UAE and Kuwait.

As the novel coronavirus pandemic has crippled the global economic activity, the closure of businesses in the Persian Gulf region has hit low-income migrant workers particularly hard.

While the Saudi and Bahraini governments have promised to cover any shortfalls in their own national’s wages, most foreign workers, who make up 95% of the workforce in some Gulf countries, have been left out.

Forty-three in Kuwait, 30 in Saudi Arabia, four in Oman and three in Malaysia have been infected with the virus. However, there has been no report of any Nepali migrant contracting the disease in Qatar and Oman.

“As per our embassy in Malaysia, the condition of the infected workers is critical,” he said. “We are in close contact with our embassies and missions for regular updates.”

Our mission is to conduct regular follow-ups to provide necessary help to migrant workers, he added.

“Since there is a nationwide lockdown in Nepal and also in the GCC nations and Malaysia, we are unable to bring back the bodies of the deceased,” said NRN, adding that the bodies will be brought to Nepal once the situation becomes normal.

“Actually, there has been no decision on whether or not to bring back the bodies of the dead migrants,” he stated. “We will take the final decision on the basis of mutual understanding between the two countries as we do not want the infection to spread.”

GCC nations and Malaysia are the main labour destinations for Nepali migrants. According to data provided by Non-Resident Nepali Association, 1,983 Nepalis living abroad had been infected as of April 25. Among them, 49 have died and 422 have recovered.

The United Arab Emirates (UAE) has changed its law to allow companies to break the work contracts of non-nationals, restructure contracts to lower salaries and pressure workers to take unpaid leave.

The majority of foreign workers in the Persian Gulf region come from southern Asian nations, including Nepal, India and Pakistan.

"The situation is very bad. Many of my friends and people in my company have lost their jobs," said an electrician from Nepal who is on temporary unpaid leave from his job at a construction company in the UAE.

The World Bank said global shutdowns due to the coronavirus pandemic are causing the sharpest decline in remittances in recent history. The absence of these payments is "a loss of a crucial financial lifeline for many vulnerable households," the bank said.

Other migrant workers who are now out of a job and must continue to pay rent have been left with few to no options for getting themselves home. One exception has been in Kuwait, where the government announced an amnesty for those who have overstayed their visas and offered to pay to have them travel home.

Foreign workers forced to stay where they are often face high health risks due to their living conditions. Rights groups have pointed to the dangers caused by overcrowded accommodation for foreign workers that makes social distancing impossible. This stands in stark contrast to the conditions enjoyed by local populations in the wealthy Gulf nations.

In addition to compounding the precarious situation of foreign workers' economic and labor conditions, the pandemic has also fueled racist discourse across the region.

In March, Kuwaiti MP Safaa al-Hashem called for the deportation of foreign workers who had overstayed their visas in order to "purify" the country from the risk they posed of transmitting the virus. Similar sentiments were spread on social media in Bahrain, according to advocacy group Migrant-Rights.org.

In both cases celebrities and academics have pushed back. On Twitter, Bahraini scholar Wafa al-Sayed railed against "abandoning a social group that has built our country and made our lifestyle more luxurious."

The coronavirus outbreak has also exacerbated the vulnerability of foreign live-in workers, such as maids and cleaners.

Such domestic workers have been placed in further danger as abusive employers use lockdowns to stop them from leaving the homes they work in, said Joanna Concepcion, head of the Filipino advocacy group Migrante International.

The pandemic has left agencies that support foreign workers in the Gulf understaffed. "There's been very limited responses in trying to assist in rescuing migrant workers who are victims of rape and physical abuse," Concepcion said.

All of these factors combined have taken such a psychological toll that suicides among foreign workers have risen. In Kuwait alone, there have been nine cases and four attempted suicides in the last four weeks, according to online outlet Al Rai.

Since the outbreak of the coronavirus pandemic, a total of six Nepali migrant workers employed in the United Arab Emirates have lost their lives and another 305 labourers in the Gulf Cooperation Council nations and Malaysia have been infected by the virus.

Kumar Dahal, director general of the Department of Foreign Employment, informed that the Dubai-based local hospital and police station had made available the health reports of deceased workers to their relatives. All the six deceased migrants had been working in the UAE for the last two to 10 years.

In the initial phase, a 40-year-old woman working as housemaid in Dubai had lost her life to coronavirus.

However, due to the sensitivity of the matter and the impact it could have on the country, the government had not provided details of the deceased persons, said Dahal. “We provided details to the families concerned only as the information could have affected the country negatively in its fight against the contagion,” he added.

Child Marriage Kills More Than 60 Girls A Day Globally And 6 Girls Daily In South Asia: Save The Children By NEW SPOTLIGHT ONLINE 1 week, 2 days ago