Ethiopian Renaissance Dam Controversy: Egypt And Sudan For More Negotiations On Flow of Water In Nile

Ethiopian Renaissance Dam Controversy: Egypt And Sudan For More Negotiations On Flow of Water In Nile 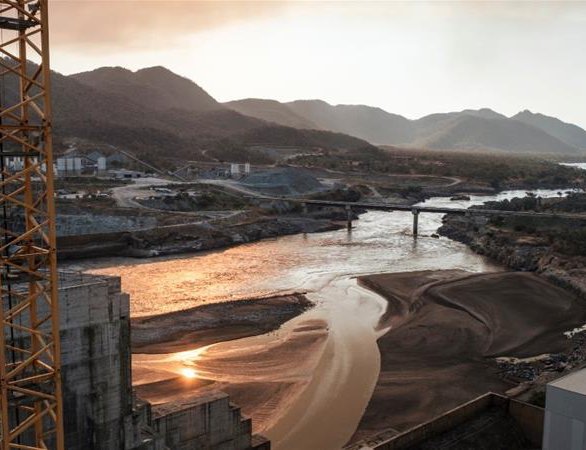 Ethiopia's prime minister said on Tuesday his country, Egypt, and Sudan reached a "major common understanding which paves the way for a breakthrough agreement" on a significant dam project that has led to sharp regional tensions and fears of military confrontation.

Egypt and Sudan view the dam as a serious threat to vital water supplies, while Ethiopia considers it essential for its electrification and development.

The statement by Abiy Ahmed's office came as new satellite images show the water level in the reservoir behind the nearly completed $4.6bn Grand Ethiopian Renaissance Dam is at its highest in at least four years.

Ethiopia has said the rising water is from heavy rains, and the statement said, "it has become evident over the past two weeks in the rainy season that the [dam's] first-year filling is achieved and the dam under construction is already overtopping."

Ethiopia had said it would begin filling the reservoir of the dam, Africa's largest, this month even without a deal as the rainy season floods the Blue Nile. But the new statement said the three countries' leaders have agreed to pursue "further technical discussions on the filling ... and proceed to a comprehensive agreement".

Egyptian President Abdel Fattah el-Sisi stressed Egypt's "sincere will to continue to achieve progress over the disputed issues", a spokesman's statement said. It said the leaders agreed to "give priority to developing a binding legal commitment regarding the basis for filling and operating the dam".

Years of talks with a variety of mediators have failed to produce a solution.

Kevin Wheeler, a researcher at the Environmental Change Institute, University of Oxford, said fears of any immediate water shortages "are not justified at this stage at all, and the escalating rhetoric is more due to changing power dynamics in the region."

However, "if there were a drought over the next several years, that certainly could become a risk," he said.

Egypt, which is almost entirely dependent on the Nile for its fresh-water supplies, sees the dam as an existential threat. Sudan has long been caught between the competing interests.

Ethiopia announced in April 2011 that it intends to build four large dams on the Nile, including one of the largest in the world, the Grand Ethiopian Renaissance Dam (formerly known as Project X or the Grand Millennium Dam). This huge dam will flood 1,680 square kilometers of forest in northwest Ethiopia, near the Sudan border, and create a reservoir that is nearly twice as large as Lake Tana, Ethiopia’s largest natural lake. Approximately 20,000 people will be resettled for the project. The US$5 billion scheme is out of scale for such a poor country; the current cost estimate equals the country’s entire annual budget. The costly project is monopolizing government funding for the energy sector, leaving many worthy projects that would directly address the nation's high energy poverty underfunded.

The project’s launch came in the midst of the Egyptian revolution, which some observers believe was intended to take advantage of the more powerful nation’s confused political state at a time when the issue of who controls the Nile is heating up. Egypt has long held the majority rights to the Nile – a situation that especially angers Ethiopia, which is the source of 85% of the river’s waters.

While there are no known studies about the dam’s impacts on the river’s flow, filling such a huge reservoir (it will hold up to 67 billion cubic meters of water, and could take up to seven years to reach capacity) will certainly impact Egypt, which relies almost totally on the Nile for its water supply. Development Today magazine reports that the Nile flow into Egypt could be cut by 25% during the filling period. Many fear the project could set off a water war in the region, and indeed, in mid-2013, tensions flared dramatically. To diffuse the tensions, Ethiopia, Egypt and Sudan signed a "Declaration of Principles" on the 23rd of May 2015 that sets out the rights and obligations of each of the three countries related to the construction of the Grand Ethiopian Renaissance Dam.

The potential for conflict is probably the main reason international funders have shown no interest in supporting the project. The government of Ethiopia is partially financing the dam: it has devised a scheme to sell bonds for the project, is raising taxes and is encouraging Ethiopians to support the dam with their paychecks.

The dam’s construction contract was given (without competitive bidding) to Italy’s Salini, which is also building the controversial Gibe III Dam on Ethiopia’s Omo River.

The Grand Ethiopian Renaissance Dam (GERD), formerly known as the Millennium Dam, is under construction in the Benishangul-Gumuz region of Ethiopia, on the Blue Nile River, which is located about 40km east of Sudan. The project is owned by Ethiopian Electric Power Corporation (EEPCO).

“A tripartite committee was formed in 2012 to promote understanding and look into the benefits and impacts the project would have on the three countries.”

Construction of the Grand Renaissance Dam started in April 2011 after the ETB80bn ($4.7bn) engineering, procurement and construction (EPC) contract was awarded to Salini Costruttori.

The Grand Ethiopian Renaissance Dam project is expected to be completed by July 2017. The people and Government of Ethiopia are funding the project, which will not only serve Ethiopia, but Sudan and Egypt as well. The latter two countries depend on the Nile River for their water although 85% of the river flows in Ethiopia.

The dam’s construction is expected to create up to 12,000 jobs. Approximately 20,000 people will be resettled during the course of the project.

The reservoir and dam will offer major benefits to Ethiopia, Egypt and Sudan. Egypt has for a long time held the major ownership of the water from the Nile River and prevented Ethiopia from constructing a dam. Egypt depends on the Nile for 90% of its water needs. 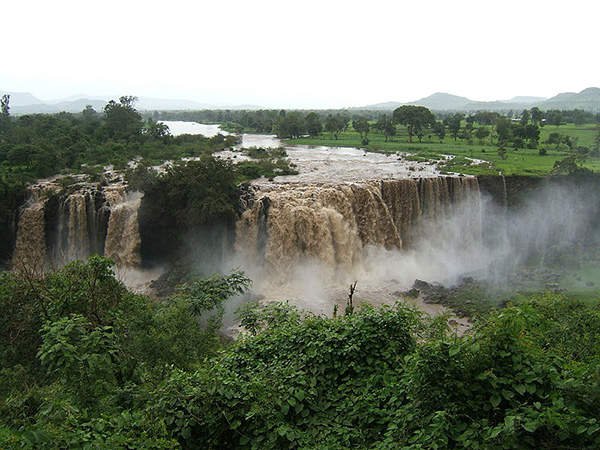 A tripartite committee was formed in January 2012 to promote understanding and look into the benefits and impacts the project would have on the three countries.

Aimed primarily at generating power, with an expected capacity of 6,000MW, the main and saddle dams will also create reservoirs with an impounding capacity of 74 billion cubic metres.

“The planning phase of the project was carried out under a name called Project X, which was later changed to Millennium Dam.”

The dam will be capable of handling a flood of 19,370 cubic metres per second, will reduce alluvium in Sudan by 100 million cubic metres and also facilitate irrigation of around 500,000ha of new agricultural lands. It will also reduce approximately 40km of flooding in Sudan, upon its completion.

The dam will also serve as a bridge across the Blue Nile, which features a small number of bridges and few pedestrian bridges.

Construction of the new Naga Hammadi barrage was completed in the spring of 2008.

The site of the dam was identified when the US Bureau of Reclamation first made a survey of the Blue Nile river between 1956 to 1964.

Two site surveys were also carried out in October 2009 and between July-August 2010, with the design being submitted in November 2010.

The Government of Ethiopia kept the design phase of the project secret until one month prior to the laying of the foundation stone for the Renaissance dam project.

The planning phase of the project was carried out under a name called Project X, which was later changed to Millennium Dam and finally to its present name.

Construction of the Renaissance dam across the Blue Nile

The Grand Renaissance dam will be a roller-compacted concrete (RCC) gravity-type, comprising of two power stations, three spillways and a saddle dam.

The main dam will be 145m high and 1,780m long. The reservoir, with a surface area of 1,680m2 at full supply level (FSL), will be formed in the middle section of the dam, between the left and right banks.

Gated spillways fitted with six radial gates will be located on the left-side of the main dam. Each gate will have a capacity to discharge 2,450m3/s of water at probable maximum flood occurrence.

The saddle dam supporting the main dam will be 4,800m long and 45m high. It will have an emergency side spillway to discharge water directly into the Roseires reservoir.

The two outdoor power stations, with installed capacities of 3,750MW and 2,250MW, will be located on either banks of the river. The power houses include 16 generating units of 375MW each.

A 500kV switchyard will also be constructed to transmit power from the power stations to the grid.

Approximately half of construction work was completed by December 2014. The 700MW first stage of the dam is scheduled to be operational by 2015.

NEA Needs To Strengthen And Expand Transmission And Distribution System: Experts By Agencies 3 months, 3 weeks ago