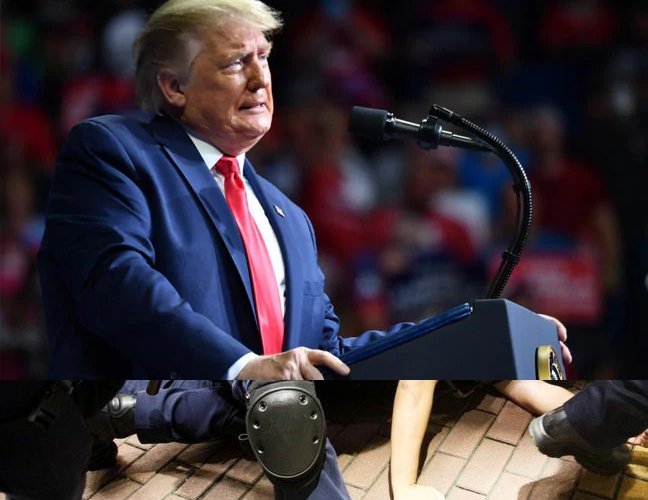 "It's not the right time for that," he said, adding that he would still give a convention speech in a different form.

Some Republican delegates will still gather in Charlotte, North Carolina, the original venue for the convention.

President Trump had moved part of the event to Florida because of social distancing rules introduced by North Carolina.

At that half-day event on 24 August, the president will be formally nominated by his party to be its standard-bearer in November's presidential election.

What did the president say?

Mr Trump told Thursday's White House coronavirus briefing that safety was his main concern in calling off the four-night extravaganza.

"It's a different world, and it will be for a little while," the president said, adding that he "just felt it was wrong" to put tens of thousands of attendees at risk.

The sheriff in Jacksonville warned this week the city was not ready for next month's political jamboree.

Florida - a state crucial to the president's re-election hopes - is behind only California and New York in total cases.

Mr Trump switched the location to Florida after the Democratic governor of North Carolina insisted in May on limiting the crowd size at the planned Republican convention, citing social distancing.

Opinion polls suggest Mr Trump is facing an uphill battle for a second term in office amid criticism of his handling of the pandemic.

Democratic Party officials taunted the president over his announcement. They are going to hold an almost entirely virtual convention in August in Milwaukee, Wisconsin, where Mr Trump's challenger, Joe Biden, will formally accept the party nomination.

A Democratic strategist involved in their conference planning said: "I wonder who will have the better convention - the party who recognised the limitations early on and have been planning for a mostly virtual/digital television production to capitalise on a prime-time audience of millions, or the clowns who keep moving theirs from place to place and have no concrete plan a month out."

In a "socially-distanced" conversation released on Thursday, Mr Biden and his former boss, ex-President Barack Obama, poured scorn on Mr Trump's deflection of blame back in March - "I don't take responsibility at all" - when asked about delays in Covid-19 testing.

"Can you imagine standing up when you were president, saying, 'It's not my responsibility?'" said Mr Biden, the former US vice-president, in their chat recorded last week.

Mr Obama replied: "Those words didn't come out of our mouths when we were in office."

As well as passing four million confirmed cases on Thursday, the US has recorded more than 144,000 deaths from Covid-19.

On Wednesday, California passed New York - the former epicentre of the US outbreak - for the most confirmed cases with 409,000.

On the same day, Missouri, North Dakota and West Virginia all broke their records for the most new cases in a 24-hour period. Alabama, Idaho and Texas also reported new record highs in daily deaths.

Across the US on Wednesday, a total 69,707 new virus cases were recorded.

Biden Aims To Vaccinate 70% Of US Adults By July 4 By Agencies 1 week, 2 days ago