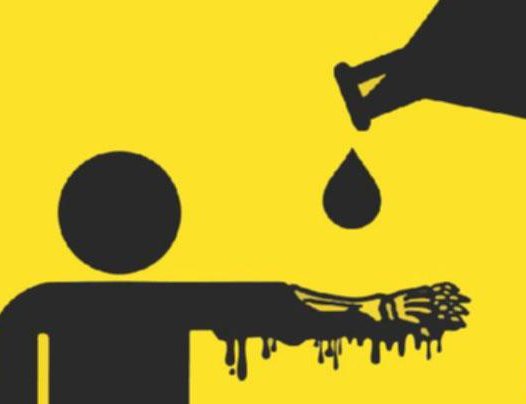 Police have arrested two men on charges of throwing acid on a 22-year-old, who is now undergoing treatment in Kirtipur burn hospital. They were arrested last night by Kathmandu Police. Her neck and chest portion has been burnt.

Munna throw acid to woman in Sitapaila who was on the way to purchase milk produce nearby her temporary residence.

"The incident occurred on July 23, 5.30 PM. Two people namely Mohamad Alam and Munna Mohamad have been arrested in connection with this case. An acid was used for the attack. Main accused Alam is from Rautahat and another Munna is from India," said Police.

The woman has been identified as Pabitra Karki, 22, who is a native of the Okhaldhunga district and is employed as accountant at Hyatt Regency. The woman suffered burn injuries injury on her face, neck, and chest.

The police have registered a case. Police said that he had visited the victim and said that she was out of danger. Although Karki dismissed her any relations with Mohamad Alam, the information storage in the mobile phone of Karki showed that Alam had made 50 calls in her mobile before attack.

On the basis of message recorded in mobile, police started investigation and arrested Alam and Indian citizen Munna who was hired by Alam to attack Karki.

As per our early investigation, it showed that the Alam dropped Karki from his motorbike and Munna throw acid to Karki soon after he left the place. Although Karki said that her relation with Alam is just like brother, police see the relations are more than that.

"She seemed to have a good relationship with one of the accused persons Alam. Later she started to maintain distance from him. The accused had warned the victim several times as he was unhappy with her behavior. The woman suffered burn injuries injury on her face, neck, and chest,” said police

“We were able to arrest two persons five hours after the attack. They were in hiding in their rented house in Dallu. Police are investigating the reason behind the accident or not,” said Police officer involved in investigation.

Police Has Made Public Bhagrathi Murder Case Accused By Agencies 1 week, 6 days ago

Bhagirrathi Was raped Before Murder By Agencies 3 weeks, 2 days ago