From the beginning of his recruitment, IGP Shailesh Thapa always stood first up to leading Nepal Police 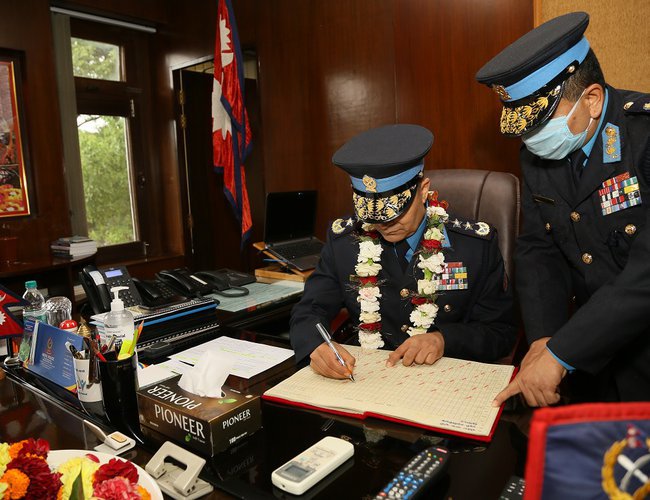 As Nepal has been passing through political transition from unitary to federal state and the process of restructuring Police is at the forefront of issues, Nepal Police has got IGP Thapa as its new head.

Born in Katunje of Bhaktapur in 2025 BS, he served in different districts during his career. The government has been giving priority to the senior-most officers in the promotion.

Interestingly, Home Secretary Maheshwor Neupane, another local from Bhaktapur, conferred the insignia on the new police chief Thapa. Thapa had joined Nepal Police as an Inspector topping in all the examinations. He has never turned back.

Thapa was number one in the Inspector results and he was very popular among his competitors. Having maintained very good results with no controversy in his career, Thapa was popular in the force. He was seen as an officer to lead the organization. 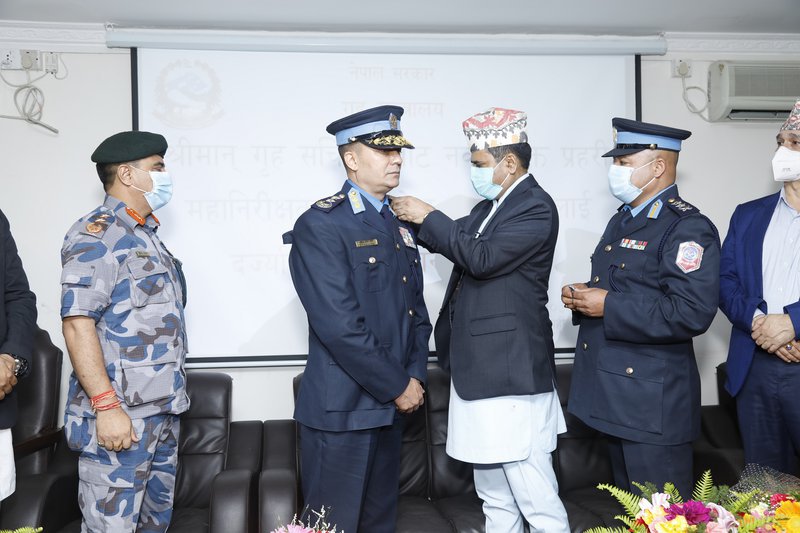 “I take this as my added responsibility with challenge and vow to translate it into an opportunity,” said IGP Thapa.

Stating that Nepal Police is guided by the policy directives of the state in line with the principles of human rights, rule of law and citizen supremacy as per the constitution and prevailing laws, IGP Thapa said that the security agency would always remain people-centric and transparent when it comes to enforcing law and maintaining law and order in the country.

IGP Thapa directed all ranks and files of Nepal Police to perform their duties and responsibilities with greater restraint, professionalism, high morale, motivation and accountability. Addressing a special function organized in NP headquarters, he said police personnel should be a true friend of helpless citizens and victims while maintaining peace and security in the society.

He directed the police personnel to carry out result-oriented, evidence-based and scientific criminal investigation through maximum utilization of available resources.

According to the new IGP, internal strengthening of the organization, institutional reform and career development of police staffers would top the priorities during his tenure.

IGP Thapa commands the force of over 80,000 police staffers till 2 May 2022. Thapa, who joined the police force on 1 May 1992 as inspector, left behind his only competitor, Additional Inspector General of Police Hari Bahadur Pal, in the race for the top post.

In all the promotions, IGP Thapa secured the first position. This is the reason when his predecessor Thakur Gyawali retired; the cabinet picked him up to lead the main institution responsible to maintain the law and order.

Home Secretary Neupane expressed his confidence that new police leadership would be active to maintain peace and security of the people, and law and order in the country.

Newly appointed IGP Thapa outlined his priority sector saying controlling crime and adjustment of police are his two priorities. IGP Thapa also said that he will execute the Home Ministry's guidelines in letter and spirit.

A meeting of the cabinet of ministers decided to appoint Thapa as the IGP, informed a member of the private secretariat of Home Minister Ram Bahadur Thapa.

Thapa has been chosen on the basis of seniority. He has been working as an additional Inspector General of Police. Thapa was appointed after incumbent IGP Thakur Gyawali got the retirement from July 8 after completing 30 years of service in Nepal Police.

As he is going to serve almost three years, Thapa’s tenure will help to stabiles the institutions and make it better equipped and flourish.

Earth Day 2021: Significant And Importance By Agencies 3 hours, 50 minutes ago

MELAMCHI COMPLETION Japan’s Pleasure By A Correspondent 6 hours, 7 minutes ago

EU SUPPORT TO EARTHQUAKE RECOVERY Successful Completion By A Correspondent 1 day, 4 hours ago