Rajbhandari, Adhikari And Khadka Are Appointed As Ambassadors

Rajbhandari, Adhikari And Khadka Are Appointed As Ambassadors 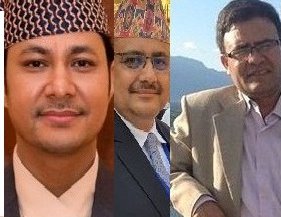 To replace the carrier ambassadors who are returning following completion of their tenure, the government has appointed ambassadors to Belgium and European Union, Pakistan and Germany.

Speaking at a press conference organized to make the Cabinet decisions public on Tuesday at Singha Durbar, Minister for Finance and Communication and Information Technology Dr. Yuba Raj Khatiwada announced the decision.

(From Left Rajbhandari, Adhikari and Khadka)

He said that Gahendra Raj Bhandari, Tapas Adhikari and Ram Kaji Khakda of the Ministry of Foreign Affairs were appointed as ambassadors to Belgium and European Union, Pakistan and Germany, respectively.

The government has decided to appoint three joint secretaries at the Ministry of Foreign Affairs as Nepal’s ambassadors to three different countries.

As the tenure of ambassador to Belgium and European Union Lok Bahadur Thapa, ambassador to Pakistan Sewa Lamsal and ambassador to Germany Ramesh Khanal is completing. Thapa and Lamsal will join the ministry as joint secretaries, Raj Bhandari, Adhikari and Khadka will be placed in a vacant positions.

Following the hearing from the House of Representatives' hearing committee, they will be appointed ambassadors.