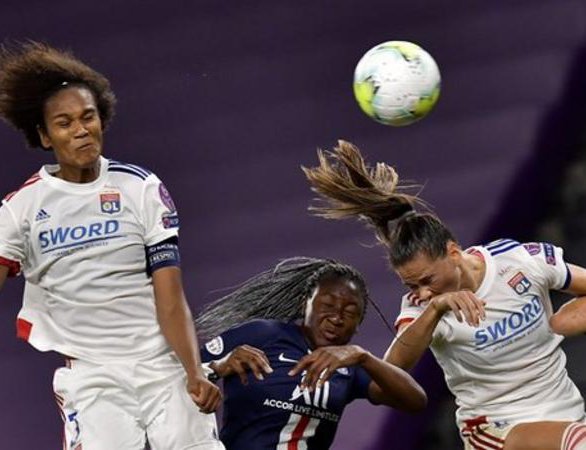 Wendie Renard secured a record ninth appearance in the Women's Champions League final for Lyon with the winner against Paris St-Germain in Bilbao.

France centre-back Renard headed in from a free-kick after Grace Geyoro was sent off for PSG.

Lyon's England forward Nikita Parris was then also shown a second yellow card as both teams were reduced to 10 players at the San Mames.

The French side will now face Wolfsburg in Sunday's final in San Sebastian.

If successful in beating the German league champions in the Anoeta Stadium, Lyon would become seven-time winners of the competition and clinch their fifth consecutive title.

The showpiece in four days' time will once again be played behind closed doors in northern Spain to reduce the risk of spreading coronavirus.

The opening to the semi-final was evenly balanced with both teams limiting chances, mimicking the previous night's last-four encounter between Wolfsburg and Barcelona.

It was holders Lyon who put together the first incisive move as England defender Lucy Bronze, who has confirmed she will leave the French club at this end of this month, saw her headed effort saved by PSG goalkeeper Christiane Endler.

PSG could have taken the lead soon after Bronze's attempt, a good counter-attacking move ending up with Kadidiatou Diani in front of goal, but the striker's tame shot was saved low by Lyon keeper Sarah Bouhaddi.

The best chance of the half fell to Lyon midfielder Sara Gunnarsdottir after a free-kick was swung in deep by Amel Majri. The Iceland forward managed to evade her marker but her free header was directed wide of the upright.

Then in the space of one second-half minute the complexion of the semi-final changed completely, leaving PSG's hopes of a first Champions League title in tatters.

First, Geyoro brought down Bronze and was shown her second yellow card of the game.

Then, from another perfect delivery by Majri from the resulting free-kick, Lyon captain Renard guided her header past Endler to score her 24th Champions League goal.

Parris' mis-timed challenge on Endler resulted in the former Manchester City player's dismissal for a second bookable offence and led to a frantic final 15 minutes in the San Mames Stadium.

PSG, runners-up twice in the competition, searched for an equaliser, but it was winning machine Lyon who secured passage from the semi-final.

Wolsburg and Lyon have faced each other three times in the Champions League final, with the French side winning on two occasions in 2016 and 2018.

However victory for Wolfsburg on Sunday would complete a treble for Stephan Lerch's team as they have won the Women's Bundesliga and German Cup already this season.

USA Secured Top Of The Medal Table In Tokyo Olympic Games By Agencies 1 month, 1 week ago