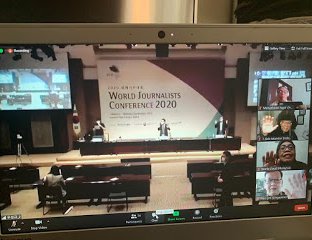 Journalists from different parts of the world draw the conclusion that they can immensely contribute to the peaceful unification of Korea and the Denuclearisation of the Korean Peninsula.

Expressing their views on three days online World Journalist Conference 2020 concluded in Seoul South Korea, they said that journalists can play an important role to create global opinion in favor of peaceful unification.

The World Journalists Conference 2020, an annual media event, organized by the Journalists Association of Korea (JAK).

Addressing the session on the 70th Anniversary of the Korean War and Peace Policy in the Korean Peninsula, media persons argued that there need to create an environment to put pressure on the North Korean regime to stop nuclear arms stockpiling and deteriorating.

Md. Tawfiguqe Ali, a journalist from Indonesia, said that the global community needs to unite to put further pressure on North Korea so that they are compelled to join a peaceful unification process. He said that journalists can play an important role to build a global opinion.

Santiago Castillo Roderiguez said expressed that there needs to put more pressure no not only on the North Korean regime but also on China as well. Peaceful Unification of Korea and peace and stability in the Korean Peninsula is in the interest of north-east Asia and the global community.

Neha Banka journalist from India said that there involve so many international players in the Korean Peninsula. She stressed the need for the implementation of UN-sanctioned and also presses China to play a role to pursue North Korea for peace.

Keshab Poudel, the journalist from Nepal, also expressed the view that the peaceful unification of Korea and peace and stability in Korean Peninsula is in the broader interest of the global community including Nepal.

Renowned Korean Scholar Eul-chul Lim elaborates in-depth the current status of the Korean Peninsula and the aggressive acts of the North Korean regime to derail the peace process.

Organized by Korean Journalist Association, more than 80 journalists from different parts of the world and over 100 participants from South Korea attended ht meeting.

Another Korean scholar Son Taek Wang also explained the Korean Peninsula’s current situation and efforts of the present South Korean government to the peaceful unification of Korea and denuclearization in Korean Peninsula.

Held in International Convention Hall, Korea Press Center, Seoul, and a three-day conference held on 14 to 16 September discussed on three most important contemporary issues. The first-day session begins with the congratulatory remarks of the prime minister of the Republic of Korea Chung Sye-Kyun.

Kim Dong Hoon, President, Journalists Association of Korea welcomed the participants for joining the conference despite the effect of the COVID-19 pandemic affecting all over the world.

Three journalists from Nepal also took part in the conference presented their papers. Senior Journalist Gokarna Awasthi presented the paper on the first-day session on fake news and Kuber Chalise, Editor of Karobar Daily, presented his paper on Global Response to COVID-19 and Disease control method.

The conference discussed in-depth examples of fake news in different countries and what measures they took to counter this global problem, as well as the future of journalism. In the session, they discussed how we can improve the validity and reliability of the media.

The second issue covered global responses to COVID-19 and disease control methods. It identified the roles that the media assumed in putting an end to the pandemic across the world by highlighting Korea’s effective disease control system and by examining other cases.

The third issue was devoted to discussing the 70th anniversary of the Korean War and peace policy in the Korean Peninsula.

Participated by the Journalists from Asia, Africa, Europe Latin America and North America, the conference held lively discussions on the contemporary global issue. As it was hosted during the time of the 70th Anniversary of the Korean War, the last day session was highly significant to understand the Korean War and the current state of the peaceful unification process.

“In light of the COVID-19 outbreak early this year, the Journalists Association of Korea (JAK) has postponed the World Journalists Conference, which normally takes place in spring with journalists from all around the world in attendance, to autumn,” JAK president Kim Dong Hoon has said.

“However, as the virus continues to spread worldwide, the event will be held online. The World Journalists Conference is an annual event that invites overseas journalists to Korea to discuss the role of the media in contributing to the development of journalism and maintaining peace both in Korea and the world.”

The event also provides a networking platform for journalists while introducing them to Korean natural heritages as well as to the lifestyles of Koreans, the peacekeepers, he added.

Each session featured local and international speakers who delivered speeches related to the theme. A question and answer session was also conducted for all speakers to answer queries, highlight points and ensure successful communication.

“This event was a meaningful opportunity to share knowledge and network with other journalists from all around.” The JAK President said.

“The three-day gathering, although short in time, does offer a valuable opportunity to contribute to the development of journalism, acquire a better understanding of Korea, and reinforce networks with other journalists,” he said.

Since its launch in 2013, this year’s event is the eighth World Journalists Conference. The Journalists Association of Korea, established in 1964, has more than 10,000 members from hundreds of media companies.

In 2019, more than 70 journalists from 50 countries took part in the week-long conference.

The Journalists Association of Korea has celebrated its 56th anniversary with a pledge to build further on the achievements accomplished over more than five decades by its founders and members.

In commemoration of the 70th anniversary of the Korean War, a panel discussion was held with various experts to discuss the ways to improve relations between North Korea and South Korea and eventually achieve peace not only in Korea but also in the world.

JICA To Support Improvement Of The Inclusive Sanitary Environment in Pokhara By NEW SPOTLIGHT ONLINE 1 week, 3 days ago

The United States Provides Additional Funding Support to Nepal Amidst the Second Wave of COVID-19 By NEW SPOTLIGHT ONLINE 1 week, 3 days ago