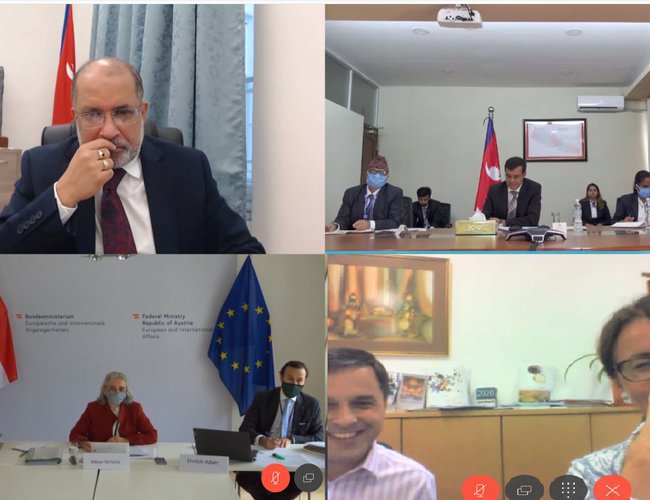 Various aspects of Nepal-Austria relations including the contributions made by the exchange of high-level visits and the need for enhancing economic cooperation were discussed during the meeting. The two sides exchanged views on expanding and deepening engagements in bilateral trade, investment, technology transfer, renewable energy and tourism. The two sides also emphasized on the importance of continuing collaborations in the areas of culture, heritage conservation as well as on people to people relations.

As mountainous and land-locked countries, both sides shared the importance of continued cooperation on matters of common agendas such as climate change at various multilateral forums. The two sides exchanged views on the challenges posed by COVID-19 as well as the measures adopted by their respective Governments.

Joint Secretary of Europe and the Americas Division at the Ministry of Foreign Affairs Nirmal Raj Kafle and the Head of Asia-Pacific Department of the Federal Ministry of European and International Affairs of Austria Gabriele Meon-Tschurtz led their respective delegations to the consultations. The Ambassador of Nepal to Austria Prakash Kumar Subedi and the Ambassador of Austria to Nepal were also part of their respective country delegations.

Only 10 Percent Of Results Remains In Local Level Polls By Agencies 2 days, 15 hours ago

Balen Shah Leading The Race with Over 4500 Votes By NEW SPOTLIGHT ONLINE 6 days, 15 hours ago