Why The WHO Was Accused Of Being Pro-China

During the SARS outbreak, the WHO issued travel alerts at a relatively early stage. But it took a markedly different approach to the coronavirus. 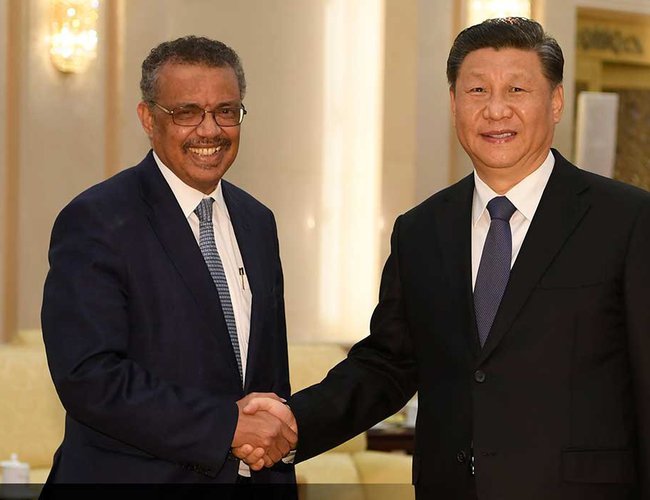 Health experts around the world were outraged last month when US President Donald Trump declared he was suspending funding of the World Health Organization in the midst of the coronavirus pandemic. Trump insists the organization’s response to the outbreak was slow, and blamed that on a pro-China bias. His critics say this is just a feeble attempt to shift blame from himself, but a history of viral geopolitics spanning nearly two decades shows this might be more than simple scapegoating.

In November 2002, doctors in China's Guangdong Province began seeing cases of a mysterious form of pneumonia. What became known as Severe Acute Respiratory Syndrome, or SARS, would spread to 32 countries and regions, sickening more than 8,000 people.

China's Communist Party faced criticism for its initial response. It took three months for the authorities to report it, and even then Beijing rejected WHO requests for more information or access to the affected area. It was only in April 2003 that China revealed the extent of the outbreak. By this point, the number of cases in the country was soaring and the virus had reached the US and Canada.

For the first time in history, the WHO issued a series of emergency travel advisories, warning people against visiting Guangdong Province, as well as Beijing, Shanxi Province, Hong Kong and Toronto. It was seen as a humiliation for China and the Communist Party.

The WHO Director-General at the time, Gro Harlem Brundtland, publicly criticized China for failing to react faster.

"It would have been definitely helpful if international expertise and WHO had been able to help at an earlier stage," she said in April 2003. "Next time something strange and new comes anywhere in the world, let us come in as quickly as possible."

It was unusual for the head of a UN body to publicly criticize a member state. International organizations rely on contributions from member countries and usually have little to gain by offending a sponsor. But Brundtland decided it was more important to pressure China not to conceal crucial information.

Dr Gro Harlem Brundtland, former Prime Minister of Norway, served as Director-General of the World Health Organization from 1998 to 2003.

In the aftermath of the SARS outbreak, the WHO and its member countries decided to amend the International Health Regulations, a set of legally binding guidelines designed to mitigate cross-border health risks. Member parties must now report any evidence of an unexpected or unusual public health event within their territories to the WHO within 24 hours.

The Chinese government was supportive of the IHR revisions, with one proviso: Taiwan had to be excluded.

Taiwan had been hit hard by the SARS outbreak and many on the island were critical of the WHO response. At first, the organization didn't provide Taiwanese authorities with crucial data, such as samples of the virus, that could have helped contain the spread. Many saw this as part of an effort to appease China, which opposes any engagement between Taiwan and the UN.

But as infections spread, and Taiwan began reporting in-hospital clusters and deaths, Brundtland dispatched WHO officials to the island. According to official data, at least 37 people died of SARS there.

Since 1997, Taiwan has been lobbying for WHO observer membership. But the island faces a major obstacle in this regard. In November 2004, China's ambassador to the United Nations Office in Geneva, Sha Zukang, made his country's position on the matter clear:

China said it would pass all public health information on to Taiwan but objects to the island taking any role in reshaping the IHR. Sha indicated the issue was a decisive one for his country:

"The future IHR has no universality without China's participation."

Meaning: if Taiwan was in, China was out. That pressure prevented Taiwanese participation in the IHR until 2009, when the island elected pro-China President Ma Ying-jeou.

Sha Zukang served as the Chinese ambassador to the United Nations office in Geneva.

This history gives some insight into the relationship between Beijing and the WHO today, and the three principles which seem to guide Chinese policy regarding international public health:

(2) Prevent travel alerts that disrupt the flow of people and goods.

(3) Curb the relationship between Taiwan and the WHO.

When evaluated in light of these tenets, it's easy to see how the WHO's coronavirus response has prompted accusations of a pro-China bias.

In January 2020, WHO Director-General Tedros Adhanom Ghebreyesus visited Beijing to meet with President Xi Jinping, and praised China's response to the outbreak.

During the SARS outbreak, the WHO issued travel alerts at a relatively early stage. But it took a markedly different approach to the coronavirus. This time around, the organization said travel restrictions would have only a limited effect on stemming the spread of infections—despite the fact that international traffic to and from China was far greater in early 2020 than it was in 2003.

And its assessment has not borne out in reality. The governments that suspended flights to and from China at an early stage, including Taiwan and New Zealand, have had the most success at containing the coronavirus.

Director-General Tedros has also found himself involved in a spat with Taiwan's leaders. On April 8, he said he had been receiving racial abuse for months, and accused Taiwan's foreign ministry of knowing of it and even joining in. President Tsai Ing-wen called the accusation baseless. She added that the WHO had denied Taiwan access to information vital to containing the virus.

Two days later, Tedros argued with Taiwan about its initial response to the outbreak. He said, as part of IHR protocol Taiwanese authorities had sent an email on December 31, 2019, warning about a mysterious form of viral pneumonia coming out of Wuhan, but did not mention the possibility of human-to-human transmission. Taiwanese officials hit back, saying public health professionals would have been able to discern that possibility from the wording of the warning, which mentioned "atypical pneumonia" and "patients isolated for treatment."

A growing chorus of international media outlets says China's response was too slow. The Associated Press reported in mid-April that leaders in Beijing took six days to tell the world they were likely facing a pandemic, even as millions of people traveled for the lunar holidays. But the WHO, so candid with its criticism during the SARS epidemic, has been conspicuously silent this time.

Brundtland, the WHO Director-General who dealt with SARS, has described how she handled the Taiwan issue: "I had the responsibility to work with the health authorities of Taiwan to help prevent spreading in Tai-wan or from Taiwan or into Taiwan. In that way, the governments that were most against Taiwan becoming part of the U.N. system had to shut up."

It's not hard to guess who was "most against Taiwan.

Six MoUs Signed Between Nepal And India By Agencies 3 days, 5 hours ago