Panchtantra says the King who mercifully grants due share in all circumstances to serving folk may fitly rise. PM Oli’s recent strategy to grant due share to his friend is helping him to rise in the political games in all contexts.

Panchatantra has a great influence on the Nepalese mind. Whether he or she belongs to the party of communists, congress, or any political persuasion, his or her wisdom is guided by Panchatantra rather than any foreign ideology. PM Oli is not an exception. In his recent political maneuvering, PM Oli has been using a strategy similar to the wisdom of Panchatantra.

Following the reshuffle of cabinet and appointment of ambassadors, the dispute in the ruling Nepal Communist Party (NCP) has openly surfaced again. As Prachanda and his group, including former Prime Minister Madhav Kumar Nepal and Jhalnath Khanal, discussed tabling a no-confidence motion in the parliamentary party, PM Oli got angry. In his one to one meeting with Prachanda, PM Oli reportedly told him that they cannot go together on the same platform for a long time.

PM Oli snubbed Prachanda threatening that he can split the party if necessary and asked him to think about this. PM Oli’s arrogance is understandable as he has overwhelming support in the parliamentary party and party grass-root level.

With the support from Bam Dev Gautam and former Maoist and Home Minister Ram Bahadur Thapa Badal, PM Oli has cracked his rival faction’s strength in the party.

Knowing PM Oli’s strength, Prachanda and his group have changed their strategy with a softer line. “Prachanda has to take initiative to break the ice. A bigger person has a bigger role,” twitted Narayan Kazi Shrestha, one of the closet strategists of Prachanda camp.

However, DPM Pokharel changed his stand the next day. “The decision taken by two co-chairs of the party is acceptable for us. The meeting of two co-chairs can solve all the problems.”

Other leaders of the ruling Nepal Communist Party (NCP), who are close to PM Oli also believe that the intra-party feud is not as serious as it is being portrayed in the media. 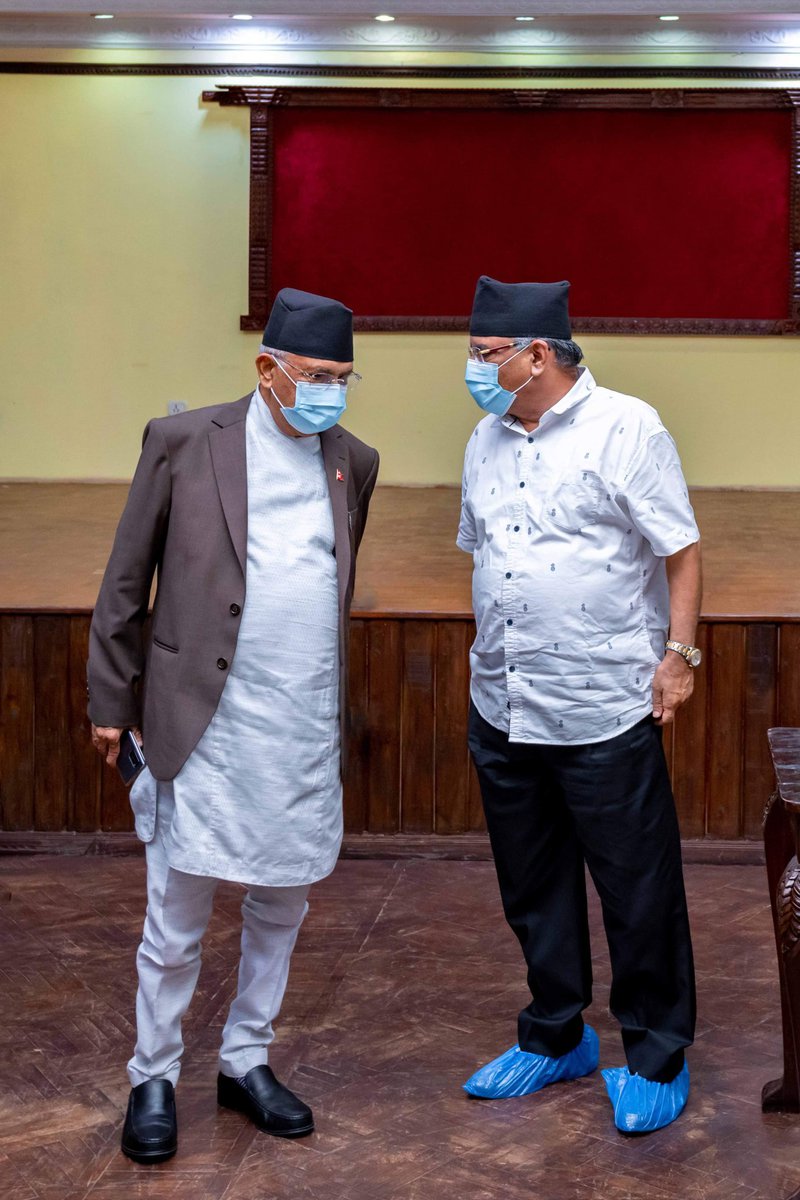 They have been reasoning that the usual discussions and remarks within a big and Democratic Party like NCP were exaggerated by the media, projecting that the party was on the verge of division.

“Whatever appeared in the media was not true. The regular meetings between the party Chairmen, Prime Minister KP Sharma Oli and Pushpa Kamal Dahal 'Prachanda', were centered on resolving the internal affairs of the party,” said Subhash Chandra Nembang, deputy leader of the NCP Parliamentary Party and standing committee member.

"The intra-party feud has not reached the level of dividing the party and such a situation will not come in the future as well," said Nembang. “The disputes within the party were not as complex as that being shown in the media. PM Oli and chairman Prachanda are holding discussions on a regular basis. The party will not split and we will make sure that the NCP doesn’t face such a situation."

"I believe that the ongoing disputes will be resolved with the help of regular discussions between the Chairmen," said Nembang. "The second-level leaders of the party have been giving their recommendations and consultations to the Chairmen regularly.”

Whatever the leaders say, PM Oli’s strategy to pressure Prachanda with a shot to split the party seems to be working this time. With no adequate resources in hand and many of his one-time die-hard colleagues deserted him to join PM Oli’s camp, Prachanda has very few options before him other than to go for a compromise.

Appointing the ministers of his choice and nominating the ambassadors of his loyalists, PM Oli has been pleasing his supporters discarding his rivals in the party. By defusing the tensions within a week in his favor by luring Bam Dev Gautam and Home Minister Ram Bahadur Thapa in his camp, PM Oli has shown that he knows the art of politics. Oli’s wisdom of Panchatantra works to defuse the turmoil in the party.