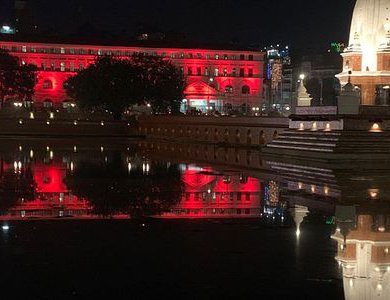 The Bal Gopaleshwor Temple at the centre of historic Rani Pokhari in Kathmandu would remain open for the public from 5 am to 5 pm on the day of Bhaitika during the Tihar this year reports RSS.

The Temple draws a large number of people without brothers and sisters to receive tika on the Bhaitika which falls on November 16 this year.

It is the day when sisters put tika on the forehead of their brothers, wishing for their prosperity and long life.

According to RSS, The Kathmandu Metropolitan City (KMC) and National Reconstruction Authority coordinated the opening of the temple for the devotees. The temple destroyed in the 2015 earthquake has been reconstructed and was recently inaugurated by President Bidya Devi Bhandari.

The temple built in Shikhara style by King Pratap Malla in the 17th century had sustained damages in the Gorkha Earthquake in 2015 and was reconstructed in its original style by the Department of Archeology.

Chief of the Department of Environment in KMC, Hari Kumar Shrestha, shared that security arrangements have been put in place in the temple and it has been decorated with flowers and colourful lights.

The devotees could worship in the temple while people without brothers and sisters could put tika in the temple for the first time since the Gorkha Earthquake.

The auspicious time for putting tika on the Bhaitika is at 11:37 am, according to the Nepal Calendar Determination Committee.