China And The U.S. Are Edging Toward A New Cold War: Kissinger

China And The U.S. Are Edging Toward A New Cold War: Kissinger 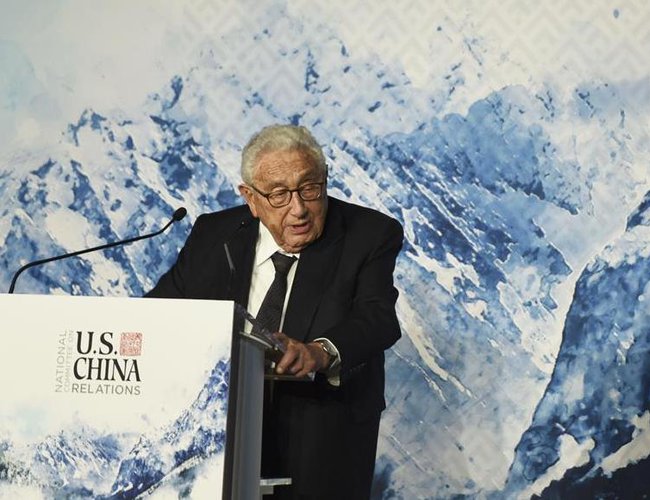 Former U.S. Secretary of State Henry Kissinger on Monday called for Joe Biden to restore communication with China and warned that otherwise the world would suffer a catastrophe like World War I.

The swift erosion in ties this year means China and the U.S. are edging toward a new Cold War, Kissinger said.

"Unless there is some basis for some cooperative action, the world will slide into a catastrophe comparable to World War I," Kissinger said during the opening session of the Bloomberg New Economy Forum, adding that military technologies available today would make such a crisis "even more difficult to control" than those of earlier eras.

"America and China are now drifting increasingly toward confrontation, and they're conducting their diplomacy in a confrontational way," the 97-year-old said in an interview with Bloomberg News Editor-in-Chief John Micklethwait.

"Trump has a more confrontational method of negotiation than you can apply indefinitely," Kissinger said.

The veteran diplomat said that the two sides should "agree that whatever other conflict they have, they will not resort to military conflict."

To achieve that, the U.S. and China should jointly create "an institutional system by which some leader that our president trusts and some Chinese leader that President Xi trusts are designated to remain in contact with each other on behalf of their presidents," he said.

Meanwhile, speaking in conversation with former UK Prime Minister Tony Blair at the forum, former U.S. President Bill Clinton said the U.S. could strengthen its negotiating position with China by enlisting partners, from Europe to Asian nations that were part of the Trans-Pacific Partnership trade pact abandoned by President Trump, Bloomberg reported.

Blair agreed it was time for Biden's team to take a more coherent coordinated approach to China rather than relying on the more unpredictable mix of measures - from tariffs to sanctions - pursued by the Trump administration.

Former U.S. Treasury Secretary Hank Paulson said that the incoming Biden administration should start a new round of negotiations with China concerning trade, according to Bloomberg.

"We'll need to deal with structural and process issues that include services, not just goods," he said. "The agreement should be done in phases with regular deliverables, beginning with easier issues that build momentum to tackle the tough ones."

COVID-19 Kills Over One Million In US By Agencies 2 days, 16 hours ago

Ukrainians Forces Continues Their Fighting Against Russians By Agencies 2 days, 16 hours ago

Russia Agree To Evacuate Wounded Soldiers From Azovstal By Agencies 3 days, 16 hours ago