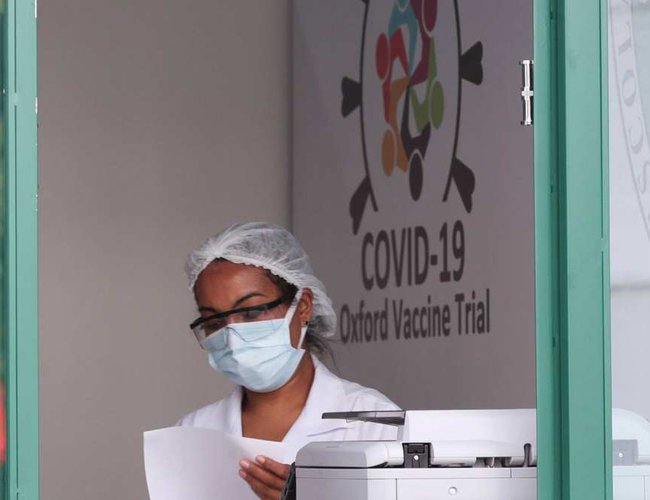 Oxford-AstraZeneca on Monday announced that interim trial data from the crucial phase 3 trials have shown that its Covid-19 vaccine candidate is 70.4 per cent effective, indicating a high level of protection against novel coronavirus infection.

In Pune, Dr Cyrus Poonawalla, founder of the Serum Institute of India (SII), which is testing and manufacturing the candidate under licence, said the vaccine would be available in India “very soon”.

“A vaccine against the coronavirus disease will be available very soon in our country. We are going to ask for special emergency marketing authorisation in 45 days from today,” the 79-year-old chairman of the Poonawalla Group told The Indian Express.

SII scientists are, in fact, hopeful of being able to roll out the vaccine before the year is out. Poonawalla said: “We hope the government will give the go-ahead for vaccinating persons at highest risk – doctors, nurses, and healthcare workers at hospitals.” In anticipation of receiving regulatory clearance, 100 million doses will be ready through special licensure in one and a half months, he said.

Scientists at the University of Oxford and the British-Swedish pharma giant AstraZeneca made three important announcements about the “highly effective”vaccine candidate, AZD1222: first, two different dosing regimens had demonstrated efficacy, with one showing a better profile; second, the candidate met the primary efficacy endpoint in preventing infection; third, no hospitalisations or severe cases of Covid-19 were reported in participants who were given the vaccine candidate.

“An independent Data Safety Monitoring Board determined that the analysis met its primary endpoint showing protection from Covid-19 occurring 14 days or more after receiving two doses of the vaccine. No serious safety events related to the vaccine have been confirmed. AZD1222 was well tolerated across both dosing regimens,” AstraZeneca said in a release.

“The combined analysis from both dosing regimens resulted in an average efficacy of 70 per cent. All results were statistically significant. More data will continue to accumulate and additional analysis will be conducted, refining the efficacy reading and establishing the duration of protection,” the release said.

The pooled analysis included data from the phase 2/3 trial in the United Kingdom, and phase 3 trial in Brazil. Over 23,000 participants are being assessed following two doses of either a half-dose/full-dose regimen or a regimen of two full doses of AZD1222 or a comparator (MenACWY).

Oxford University said it will now support AstraZeneca in submitting both the interim phase 3 efficacy data and the extensive safety data to all regulators “across the world, including in the UK, Europe and Brazil for independent scrutiny and product approval, including for emergency use”. Also, the release said, “the company will seek an Emergency Use Listing from the World Health Organisation for an accelerated pathway to vaccine availability in low-income countries.”

Poonawalla told The Indian Express that “Forty million doses (of the vaccine candidate) have already been produced and definitely we should be able to produce another 60 million doses in a minimum of 45 to 60 days.”

Following the announcement of the trial results by Oxford, SII CEO Adar Poonawalla tweeted that he was “delighted to hear that Covishield – a low cost, logistically manageable and soon to be widely available Covid-19 vaccine, will offer protection upto 90 per cent in one type of dosage regime and 62 per cent in the other dosage regime”.

Covishield is the name for the AZD1222 candidate in India. SII, which was founded by Poonawalla in 1966 and which is now the world’s largest vaccine maker by doses, has multiple Covid-19 vaccine partnerships, and is carrying out the Indian trials of the Oxford-AstraZeneca candidate.

Emergency authorisation for the vaccine by the Indian regulator will be the first step in ensuring its administration based on a priority list, starting with frontline healthcare workers.

Oxford-AstraZeneca have announced the interim phase 3 data days after the phase 2 peer-reviewed trial results showed that the vaccine induces strong antibody and T-cell immune responses across all age groups, including in older adults, and has been found to be safe and well-tolerated.

Professor Andrew Pollard, Chief Investigator of the Oxford Vaccine Trial at Oxford, said: “These findings show that we have an effective vaccine that will save many lives. Excitingly, we’ve found that one of our dosing regimens may be around 90% effective and if this dosing regime is used, more people could be vaccinated with planned vaccine supply. Today’s announcement is only possible thanks to the many volunteers in our trial, and the hard working and talented team of researchers based around the world.”

At SII, at least 350 personnel are engaged 24/7 in the production of the vaccine. Several countries are keen on the Oxford candidate which is based on a proven technology, and is set to be cheaper than the Moderna and Pfizer mRNA vaccines. In an earlier media interaction, the leadership of SII had said the vaccine could be priced at a maximum of Rs 1,000 for two necessary doses for the public.