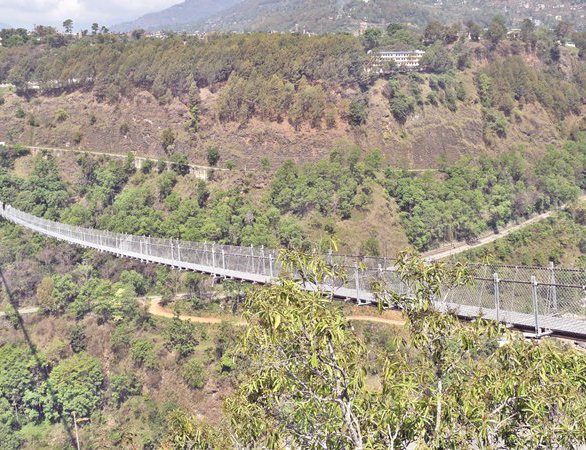 The process of registering the 567 meters long suspension bridge linking Baglung and Parbat in the Guinness World Records has been initiated reports RSS.

According to RSS, the process began after the construction of the bridge over the Kaligandaki river, joining Ramrekha in Baglung municipality to Aduwabari in Kusma municipality-1, Parbat was completed and handed over.

The Suspension Bridge Division Office, Kathmandu handed over the bridge to Baglung municipality on January 16. According to senior engineer at the Office, Huma Kant Mishra, the record so far of a similar suspension bridge is 494 meters in Switzerland. Hence, this bridge could be the longest of the word.

The bridge with a height of 138 meters was built in two years at the cost of around Rs. 120 million reports national news agency.

Putin Talks With French President And German Chancellor
May 29, 2022
Government Is Committed To Implement NHRC’s Recommendations: Home Minister Khand
May 28, 2022
Russia Military Advances To Control Another City In The Eastern Ukraine
May 28, 2022
I Will Make Kathmandu World’s Best City: Mayor Balen Shah
May 27, 2022
Forbes Listed Five Nepalis In Forbes’ 30 Under 30 From Asia
May 27, 2022

Forbes Listed Five Nepalis In Forbes’ 30 Under 30 From Asia By Agencies 1 day, 20 hours ago