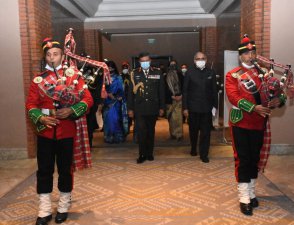 The Embassy of India in Nepal organized a function on 20 January 2021 on the occasion of the 73rd Indian Army Day. Purna Chandra Thapa, Chief of Army Staff Nepali Army and Honorary General of Indian Army, was the Chief Guest.

According to a press release issued by Embassy of India Vinay Mohan Kwatra, the Ambassador of India to Nepal spoke about the historical ties between Indian Army and the Nepali Army that bind the two countries in a deep bond of fraternal ties.

He also expressed gratitude for the selfless service and sacrifice of Gorkha soldiers in Indian Army. He reiterated India’s commitment to serve the Indian Army pensioners and their families residing in Nepal.

COAS General Thapa conveyed his greetings to General MM Naravane, COAS Indian Army and Honorary General of the Nepali Army, on the occasion of the Indian Army Day.