Gifting one million doses of India-Made COVID-19 Vaccine, India has shown its closeness towards Nepal 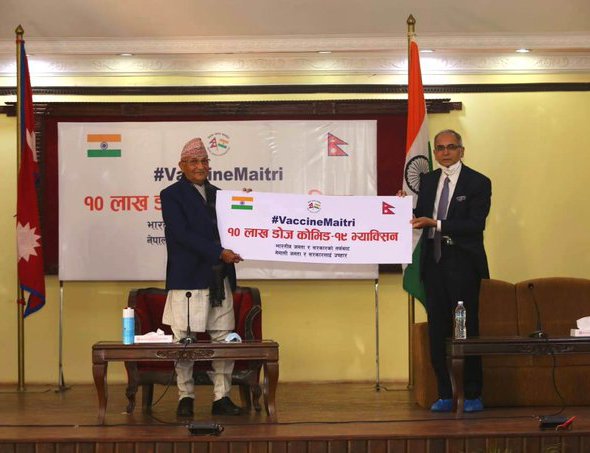 As there is a massive scarcity of COVID-19 vaccine all over the world and many countries around the world are desperately seeking the vaccine, India has provided one million doses of the vaccine to Nepal just a week after rolling it out for emergency use in India.

With the handover of the vaccine, there is a great sigh of relief among the medical workers and government officials. This first batch of a million doses is highly important because it will be enough to cover the entire frontline workers, including medical professionals, sanitation workers and security personals.

Prime Minister K.P Sharma Oli has thanked Prime Minister Narendra Modi and people of India for providing one million doses of COVID-19 vaccine called Covishield to Nepal. Receiving the vaccine from India, Prime Minister Oli said that the support given by India at this juncture is highly important. “We appreciate India’s crucial lifesaving support,” said Oli.

Ambassador of India to Nepal Vinay Mohan Kwatra handed over one million doses of Covishield vaccine to Prime Minister K.P. Sharma Oli at Prime Miniter’s residence in Baluwatar amid a function.

In his tweet, External Affairs Minister of India Dr. S. Jaishankar said that Nepal received Indian vaccines. Putting neighbors first, putting people first! In its tweet, Embassy of India said 1 million doses of COVID19 vaccines arrived in Flag of Nepal from Flag of India. A testimony to India’s abiding friendship and commitment towards people of Nepal.

The Government of India gifted one million doses of ‘Made in India’ COVID19 vaccines to Nepal for the immediate requirement of Nepal’s healthcare and front-line workers.

The vaccines were supplied on the request of the Government of Nepal. This assistance was also discussed during the recently concluded 6th India-Nepal Joint Commission Meeting co-chaired by the two Foreign Ministers in New Delhi on 15 January.

Ambassador Kwatra expressed the hope that the arrival of the vaccines would mark the beginning of the end of COVID19 and reiterated India's steadfast commitment to the people of Nepal in their efforts to defeating the virus.

The Health Minister said the timely gift of Indian vaccines to Nepal was akin to a parallel roll-out in both countries.

Ambassador Vinay Kwatra said the vaccines were a gift from the people of India to the people of Nepal and conveyed best wishes for Nepal’s vaccination drive. Prime Minister Oli thanked Prime Minister of India for the generous grant of COVID vaccines to Nepal and said gifts are always a special gesture and the gift of vaccines at the time of crisis add to the significance.

Along with this support, India had extended human resource training to Nepal for vaccine roll out at the ground level covering, inter alia, administrative and operational aspects of immunization, cold chain, and communication and data management.

According to a press release issued by Embassy of India Kathmandu, the gratis supply of such vaccines to Nepal fulfills the solemn promise made by Prime Minister Narendra Modi to use India’s vaccine production and delivery capacity to help all of humanity fight this pandemic. It is also in keeping with India’s ‘Neighborhood First Policy’.

“The supply of the vaccines is in continuation of regular COVID assistance provided by India to Nepal since the onset of the pandemic, covering hydroxychloroquine medicines, RT-PCR test kits, ICU ventilators, Remdesivir medicines and ambulances.”

The government has prepared to provide COVID-19 vaccines to 72 per cent of the total population. As all legal, financial, and technical works to import and use the vaccines have completed, preparations are being made to start administering the vaccines within seven days, the Ministry of Health and Population informed.

As Nepal received the vaccines, it has already started to administer the front line health workers including doctors, nurses, and other supporting staffs. By offering generous support, India has shown how much importance it gives to protect the people of Nepal.