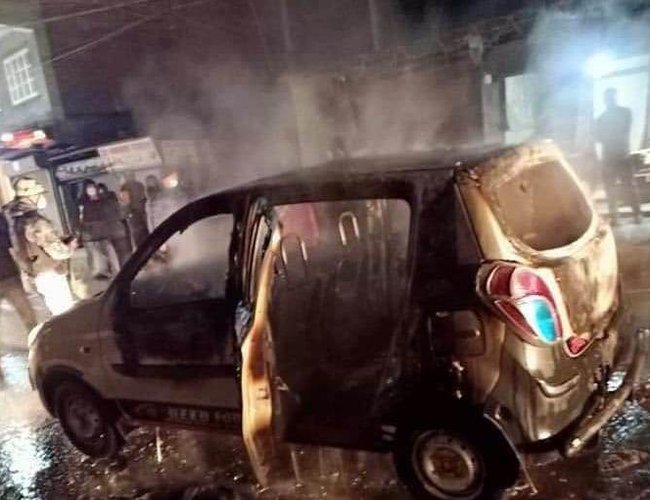 Called by NCP faction led by Pushpa Kamal Dahal and Madhv Kumar Nepal, the general strike has affected normal life in the Valley. Demonstrators are blocking vehicular movements and obstructing the mobility. The shops and businesses have remained shut.

Unruly demonstrators set ablaze a parked taxi (Province no 3-01-002 Ja 5881) in Gongabu while another vehicle in Jaya Bageshwori was vandalised,

Protesters set a parked taxi on fire in Gongabu, while police have rounded up 60 individuals for enforcing the strike.

Members of the Pushpa Kamal Dahal-Madhav Kumar Nepal-led faction of the Nepal Communist Party have been organising protests across the Capital since early Thursday morning, as part of the general strike they have called against Prime Minister KP Sharma Oli's House dissolution move.

General life has been affected as a result of the protests, as vehicular movements have been obstructed in various parts of the city while shops and businesses have remained shut.

In n some places, protesters have resorted to vandalism to enforce the strike. Police have rounded up 60 people from various places until 7am, who were trying to enforce the general strike.

The Prime Minister's decision has caused much chaos within the political sphere of the nation resulting in a split in his own party, the ruling Nepal Communist Party (NCP).