REMEMBERING THE HOLOCAUST In Educational Settings 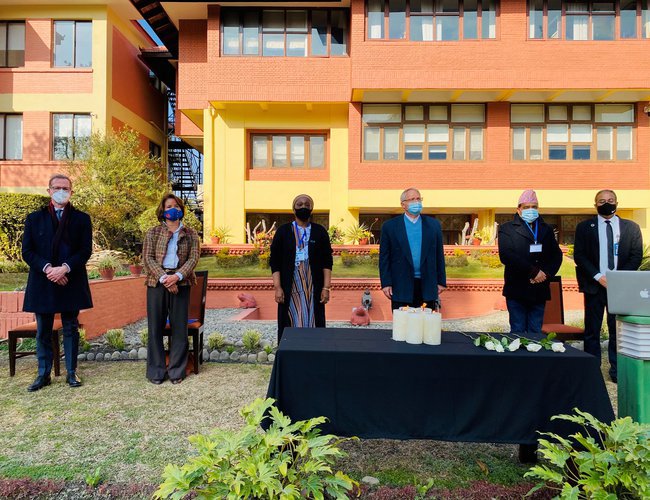 Every year on January 27, the United Nations honours the victims of the Holocaust by reaffirming its unwavering commitment to counter anti-Semitic, racist and other forms of intolerance.

This year also UN observed the International Day of Commemoration In Memory Of The Victims Of The Holocaust in UN building reminding the world horror and inhuman act against humanity.

Although almost over seven decades have passed, horror and terror committed against human beings still haunts the minds of people. Over five million people of a particular community were killed in a horrific manner.

With the support of Higher Institutions and Secondary Schools' Association Nepal (HISSAN) and V4Action Volunteers – the online volunteering network of youth established by the UN in Nepal, the virtual outreach program on Holocaust has set a target to reach out to more than 35 hundred youth from 7 provinces of Nepal within a week’s time.

On the occasion of the International Day of Commemoration in Memory of the Victims of the Holocaust, the United Nations Nepal together with the Embassy of Germany, the Embassy of Israel, the Delegation of the European Union to Nepal (EU) and Higher Institutions and Secondary Schools' Association Nepal (HISSAN) initiated a week-long educational outreach program on Holocaust with the youth of seven provinces in Nepal.

The outreach program began with a memorial ceremony hosted by the United Nations Resident Coordinator Ms. Sara Beysolow Nyanti, at the UN House. The ceremony- organized following COVID-19 safety protocols -was attended by their excellencies the Ambassadors of Germany and Israel and the Head of the EU in Nepal.

Speaking at the memorial ceremony, the United Nations Resident Coordinator, Ms. Sara Beysolow Nyanti said “remembering accurately and teaching about the Holocaust is vital in countering hatred. This has never been more important than today, a time when antisemitism, bigotry and racism are rising with devastating and violent consequences for people and communities.

“Through our week-long virtual outreach program, I call on all generations especially youth to use your voice to stand up for human rights, challenge discrimination and antisemitism byremembering the need to foster tolerance, solidarity and empathy,” Ms Nyanti added.

This year’s International Day of Commemoration in Memory of the Victims of the Holocaust is being celebrated under the theme, “Facing the Aftermath: Recovery and Reconstitution after the Holocaust.” It focuses on the measures taken by people in the aftermath of the Holocaust to begin the process of recovery and reconstitution of individuals, community, and systems of justice. The theme encourages a discussion of how measures taken in the past could contribute in how we rebuild societies today.

Resonating with the global theme, the outreach program will highlight the significance of standing up for justice to stop the rise of antisemitism and racism, including in the context of theCOVID-19 pandemic, during which we have seen a rise in hate speech and stigmatization against the COVID-19 patients and their family members. It will emphasize our collective need to stand up against injustice and say “never again”.

After reciting the Yizkor prayer in honor of all those who suffered during the Shoah, the Ambassador for Israel, Hanan Goder said, "Today we remember the victims of the Holocaust. Six million Jews were murdered by Hitler and his collaborators because of ideology that could not respect the other and could not appreciate tolerance."

He also said, "The message for us today is that we all must denounce all forms of Racism and Antisemitism and most important: we must remember! Remember the victims and all those that courageously stood against the evil of the Nazi ideology."

During the memorial ceremony, six candles representing the six million victims of the Holocaust were lit followed by an observance of one-minute of silence.

On the occasion, German Ambassador to Nepal Roland Schäfer said, “As a German, I am still haunted by the faces of my missing Jewish brothers and sisters. Those who are not there, who could not finish their lives, have children and continue, are as important to us as those who survived. No family, no country, no society can live while forgetting the ones who are missing. That’s why this week is so important, also in Nepal.”

EU Ambassador to Nepal Nona Deprez said, “Today millions in Nepal and all around the world remember those millions who lost their lives in the most horrible event of history. Ensuring this genocide is not forgotten, and educating new generations on the responsibilities of citizenship, care and engagement, are crucial for preventing such atrocity from happening again in the future.

Germany Decides To Continue With The Bilateral Development Cooperation With Nepal Beyond 2023 By NEW SPOTLIGHT ONLINE 7 hours, 25 minutes ago