Following the decision of Supreme Court, CPN-UML has fallen under the command and control of Prime Minister KP Sharma Oli who can now recommend fresh elections 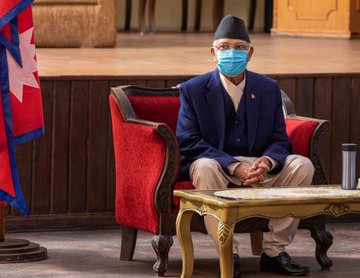 With the decision of the Supreme Court to nullify the unification of two parties in the name of the Nepal Communist Party, the political course of Nepal has taken a new direction.

Given the hung parliament with no political party with a clear majority and deep-rooted feud in the ruling party, prime minister Oli may again recommend fresh elections in case of failing to secure confidence in the house.

Unlike the last dissolution which was turned down by the Supreme Court, PM Oli's new move will have more supporters.

All political parties, which fought jointly against the dissolution of the House of Representatives, have very few options other than to convince PM Oli for elections. Given the current seat status in the parliament, a stable government is virtually impossible.

Following the verdict, the demand for resignation of prime minister Oli on moral grounds on his move of dissolving the House of Representatives has disappeared.

All the leaders in CPN-UML and Maoists are now adjusting and readjusting their positions. Nepali Congress is in a wait-and-watch mood. Senior leaders such as Dr. Shekhar Koirala and Ramesh Lekhak, however, have already indicated that NC favors elections rather than forming a coalition government.

PM Oli is now in the commanding position in his party and has become a strong prime minister. However, it is a major political and legal blow to Pushpa Kamal Dahal and Madhav Kumar Nepal. The ruling Nepal Communist Party (NCP), which is on the verge of a split due to an intra-party feud between the factions led by Prime Minister Oli and his rivals, is now history and the country is now under a coalition of CPN-UML and Maoists.

The SC invalidated the Election Commission's decision to allow CPN-UML and CPN-Maoist Centre to have Nepal Communist Party (NCP) as the name of the party they formed after their merger.

As the SC verdict effectively revives the UML and Maoist Centre, the verdict also means that the NCP government, which was a majority government formed under Article 76 (1), has been reduced to a coalition government.

If the Dahal-led CPN-MC does not extend support to the Oli government then the process of forming a coalition government under Article 76 (2) should start immediately.

The verdict was delivered by a division bench of justices Bam Kumar Shrestha and Kumar Regmi in response to a case filed by the coordinator of Nepal Communist Party Rishi Ram Kattel. The SC said that CPN-UML and CPN-MC will now be independent parties as in the past and if they wanted to merge, they could do so by fulfilling legal criteria.

The SC said Section 6 of the Political Party Act prohibited any party from having a name mimicking any other party's name. Kattel had registered his party with the EC on 6 August 2017. The EC had registered the new NCP (NCP) led by Oli and Dahal on 6 June 2018. The Kattel-led party had submitted a petition at the EC disputing its decision of 26 October 2018 allowing the party led by Oli and Dahal to have NCP (NCP) as it name.

The court observed that the name Nepal Communist Party (NCP) was not distinct from the Kattel-led NCP. The court ruling came at a time when the Dahal and Nepal-led faction of the NCP was threatening to register a no-trust motion against the PM.

Subas Chandra Nembang, who is close to Oli and was with the UML before its merger with CPN-MC, said that the NCP's Oli-led faction would honor the SC verdict as it did when the SC reinstated the HoR.

Radhe Shyam Adhikari, who represents the Nepali Congress in the National Assembly, said the SC decision had left vulnerable lawmakers who were with the UML or CPN-MC earlier but later shifted their loyalties to Dahal or Oli, respectively.

Dissidents can split their mother party only when they can muster 40 percent support in both the Central Committee of the party and the Parliamentary Party. The UML led by Oli had won 121 seats, whereas the CPN-MC led by Dahal had got 53 seats in the 275-member Lower House.

Although Dahal and Nepal earlier said that they would file a review petition against the Supreme Court's verdict that nullified the unification of the CPN-UML and CPN-Maoist Centre claiming that the SC had erred while passing the verdict, they have shifted their stand now.

Instead of challenging the verdict of the court, Nepal and his group has decided to return to the mother party. Similarly, Maoist Center members also took a similar decision.

Maoist leader Narayan Kaji Shrestha said the SC verdict was wrong, unnatural, and politically prejudiced because it gave remedy on the question (nullification of the unity between the CPN-UML and CPN-MC) that the plaintiff had not asked.

"We disagree with the court verdict dividing a unified party," Shrestha said. He added that they would seek political and legal remedies to the problems caused by the SC verdict. He said the SC verdict had left many questions unanswered, particularly the one about lawmakers and local representatives that were elected on NCP (NCP) tickets.

"The SC verdict that has asked a unified party to split into separate parties cannot be justified on any ground,” said Shrestha. Shrestha said the revival of CPN- UML and CPN-MC as independent parties would come into effect only after the Election Commission completes the process.

The fate of some CPN-Maoist Centre lawmakers Ram Bahadur Thapa, Prabhu Shah, Top Bahadur Rayamajhi, and Lekhraj Bhatta, who are with Prime Minister KP Sharma Oli, is yet to be known.

The position of UML leaders Madhav Kumar Nepal, Jhalanath Khanal, and many others, who are with Dahal, remain uncertain. Shrestha said party leaders were of the view that the CPN- UML and the CPN-MC had unified to achieve the goals of socialism-oriented democracy and social justice.

Although Maoist leader Prachanda has an option as he can decide on withdrawing the support to the prime minister after discussing the matter with other parties, it is not easy given the political scenario. Nepal, Khanal and others are urging Prachanda not to take such a course.

Following the informal meetings, leaders of the Prachanda-Nepal-led faction of the Nepal Communist Party decided to return to their previous parties—CPN-UML and Maoist (Centre).

Participating in the parliamentary party meeting of the faction in Perishdanda, they agreed to continue their struggle separately from within the party.

Dev Gurung, a senior leader of the faction, said that the meeting concluded that the verdict of the Supreme Court was against the demand of the petitioner. “The court decided against party unification, which was not the issue in the writ but the name of the party,” he added.

Gurung said that the leaders would obey the verdict and return to their previous parties till the court corrects it. “No option is left except for obeying it,” he said.

He also said that only the name of the ruling NCP was mentioned in the petition. “But the court has unfortunately divided the unified party into previous positions,” he said.

With this, the 2018 unification between the CPN-UML and Maoist Centre is no longer legally recognized, and the two parties are still in existence as separate elements. This transformed the Oli-led government from a majority to a coalition government.

At a time when there is no possibility of beginning the unification process any time soon, a stable government is unlikely. In this situation, the country may be heading for fresh elections in November.