MUSKAN KHATUN Reward For Cause 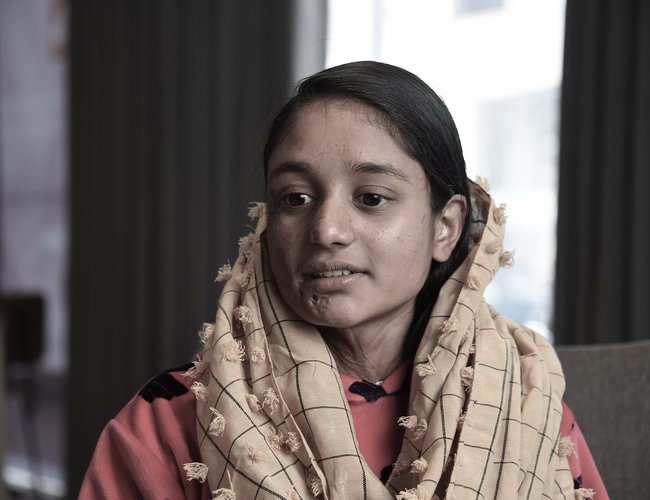 From being virtually on the verge of death following an acid attack in Birgunj, Muskan Khatun has found her way to a happiest moment in her life. For her contributions for exceptional courage and leadership, the United States has provided her International Women of Courage (IWOC) Award.

Khatun was attacked in Chhapkaiya Birgunj two years ago by a young boy on the way to school damaging her face and hand. Thanks to an immediate response and call from Ujjwal Bikram Thapa, a social activist and anti-acid activist, Khatun was brought to Kathmandu in a charter helicopter.

Thapa, a leading anti-acid activist, has not only supported Khatun for treatment but also internationally highlighted her issue making arrangements to have direct phone conversation with Bollywood star Amitabh Bachhan.

From completely physical collapse to later mental trauma, Thapa has helped her and her family to live in the society raising the cause of acid-victim all over Nepal. Inspired by her surrounding and support of Thapa, Khatun, from a poor family of Birgunj, has started to raise voice for the acid-victims.

From a school girl to a victim of terrifying acid attack, Khatun has been championing the cause of acid-victims who have to live a life time of trauma.

From being a victim at the age of 15, Khatun today is a leading activist mobilizing community against acid-attack. With the support of Thapa, she has been working against acid attack for almost a decade now.

The United States Embassy in Nepal announced Muskan Khatun will be awarded the prestigious International Women of Courage (IWOC) Award for her work to end acid attacks. First Lady of the United States Jill Biden and Secretary of State Tony Blinken will host a virtual event on March 8.

Now in its 15th year, the IWOC Award recognizes women around the globe who have demonstrated exceptional courage and leadership in advocating for peace, justice, human rights, gender equality, and women’s empowerment, often at great personal risk and sacrifice. Previous winners include Malala Yousafzai, the youngest Nobel laureate, for her advocacy work for women and girls in Pakistan.

“Drum roll please! धेरै-धेरै बधाई। I’m absolutely thrilled to announce that Nepal’s Muskan Khatun will be receiving the @StateDept ’s International Women of Courage Award for her work to end acid attacks. She’ll be the 1st Nepali to win & Keycap digit one of the youngest awardees ever!” tweeted Ambassador Randy Berry.

In 2019, at the age of 15, Muskan became the victim of an acid attack for rejecting a boy’s advances.  She suffered severe burns on her face, chest, and hands.  Her recovery was painful and continues to this day.

Despite this, Muskan turned a tragedy into an opportunity to bring about change in Nepal. Facing threats and social pressure,  Muskan lobbied for stronger laws and punishments for acid attackers. She met with Prime Minister K.P. Oli who called for a new law to be drafted for acid attacks, and issued an ordinance punishing perpetrators and regulating the sale of chemicals.

For exceptional courage and leadership in advocating for peace, the United States provides Khatun IWOC Award. This recognition has put Khatun as one of the women around the globe who have demonstrated leadership and courage.

INGOs And NGOs Are Close Partners Of The Government: Minister Regmi By NEW SPOTLIGHT ONLINE 2 days, 18 hours ago