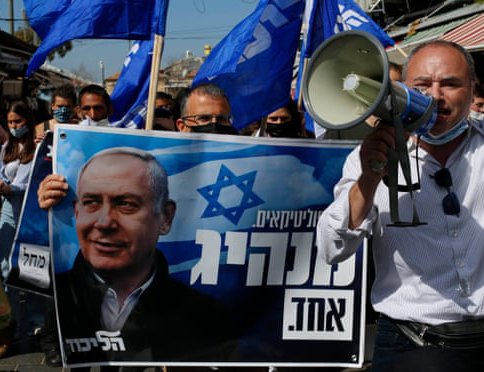 Israel is due to hold its fourth round of elections on Tuesday, although the result could simply extend a two-year-long political stalemate and possibly lead to a dreaded fifth vote.

Multiple failed attempts to form stable governments after largely inconclusive previous elections have left the country in a protracted crisis. Once the results come in on Wednesday morning, Israel is expected to enter days or weeks of intense political negotiations.

On the campaign trail last week, Netanyahu took to the stage of a packed indoor concert – gigs have recently opened up to Israelis who have been fully inoculated against the coronavirus, roughly half of the population.

“Are you smiling again?” Netanyahu asked the screaming crowd. “Are you vaccinated? Are you happy? We are the first ones in the world to overcome the coronavirus together.”

His nationalist rightwing Likud party remains ahead in the polls, predicted to take possibly 30 seats in the 120-seat parliament, the Knesset, at least 10 more than the opposition.

Still, the deeply divisive politician has not secured enough pledges from smaller parties to join him, which would be essential to form a majority coalition government, as is customary in Israel’s political system.

Key politicians from the past three elections remain contenders, although they have switched allegiances and formed new parties during a tumultuous deadlock.

The main change is that the former head of the opposition, Benny Gantz, has seen his Blue and White party lose significant support. Gantz ran on the promise of ousting Netanyahu but later joined his government, arguing that it was necessary to bring stability during a pandemic. Yet the turnaround was viewed as a capitulation to Netanyahu.

Taking Gantz’s place as opposition leader is his previous running mate, Yair Lapid, a former journalist popular with largely secular middle-class Israelis associated with Tel Aviv. Lapid’s Yesh Atid party has promised to lower the cost of living and reduce the power of religious authorities, for example, by bringing in civil marriage.

Israel’s left-leaning parties have largely been sidelined, meaning whoever leads the next government is expected to continue to take a hard line on the continuing occupation over Palestinians.

Lapid has described himself as a centrist and supports negotiations with the Palestinians. However, he recently said he was a “security hawk” and that there were some issues he would not compromise on, such as control over Jerusalem.Opposition leader Yair Lapid campaigning in Hod HaSharon. His Yesh Atid party has promised to lower the cost of living. Photograph: Amir Levy/Getty Images

“The Palestinians want to destroy us more than they want to build a nation. And as long as this is the situation, there will be no two states,” he said in a recent interview with the Times of Israel.

Diana Buttu, a political analyst and former adviser to the Palestinian president, Mahmoud Abbas, said that as far as Palestinians are concerned, there was “very little difference between the official opposition and Netanyahu’s Likud party”.

She said that what was most alarming was that polls predicted the far-right Jewish Power party, which is running as part of an alliance, could win parliamentary seats.

Last month, Netanyahu signed an agreement with that alliance, called Religious Zionism, promising positions in government in exchange for support.

That Netanyahu made such a deal demonstrates “how far right Israeli society has become”, Buttu said.

Jewish Power’s leaders are ideological successors to Meir Kahane, an Americam-born rabbi who served one term in parliament in 1984. He advocated for a Jewish theocracy, the expulsion of millions of Palestinians and a ban on marriage between Jews and Arabs.

Meanwhile, politicians from Israel’s sizeable Arab minority, who won a significant proportion of seats in the previous election, could falter. Last year, they teamed up with an anti-Netanyahu alliance called the Joint List that became the third-largest force in the Knesset. But their agreement has since fallen apart.

Perhaps Netanyahu’s biggest challenge comes instead from two former allies who share his hardline ideology. The 71-year-old leader’s former protege turned rival, Gideon Saar, broke from the ruling Likud and set up his own rightwing party, New Hope, although it has not performed as well as expected.

Naftali Bennett, Netanyahu’s former defence minister, leads the Yamina, or “right” party, and could become a key figure the day after the election when the political haggling starts.

Aviv Bushinsky, a former adviser to Netanyahu, said that unless Bennett joins him, Netanyahu, is unlikely to reach the magic number of 61 seats in the Knesset.

“Naftali Bennett is the rainmaker. If he decides that he will not join Netanyahu, then Netanyahu by no means has a government,” said Bushinsky, speaking at a Jerusalem Press Club briefing.

Still, he added that the are huge uncertainties around this election. It is unclear, following the fatigue of three election cycles, how many people will turn out to vote. And because Israeli law rules that parties need a minimum of 3.25% of all votes to even enter the Knesset, fractional changes in ballots could sway the results in unpredictable ways.

“Anything can happen,” said Bushinsky. “The day before the election is totally different than the day after. The day after will be a madhouse.”