STATUE OF LATE DILLI JUNG THAPA Cause For Recognition 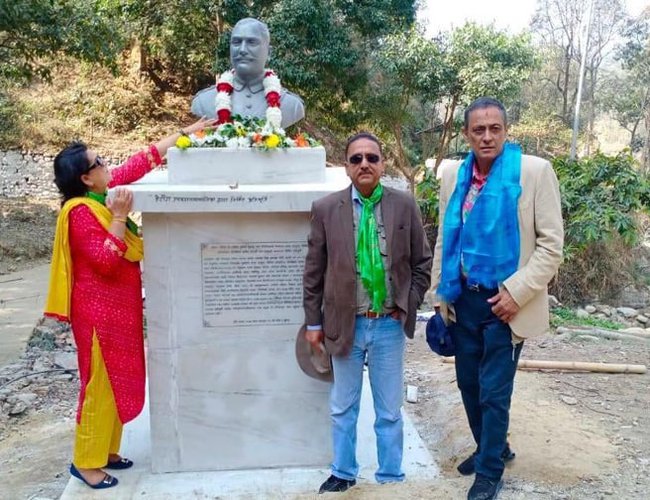 Although he built the first tunnel in South Asia, it took almost 104 years to honor the great personality of Nepal Chief Engineer Colonel late Dilli Jung Thapa for his pioneer work in tunnel construction.

Amid a function in Churia Heatauda, Hetauda Sub-Metropolitan City and Churiamai Temple Management Committee have unveiled the statue of chief engineer colonel late Thapa in front of the entry point of the tunnel.

Hetauda Municipality and the government of Bagmati Province have declared the tunnel a site of historic importance, planning to preserve it as a monument. Col Dilli Jung Thapa had also established a temple at Churiyamai, which is now an important religious site in Hetauda.

“This statue is not only the recognition of work of an individual but a recognition for Nepal’s engineering and history,” said Chanda Rana, whose research has opened several contributions of pioneer engineer late Thapa, addressing the program. 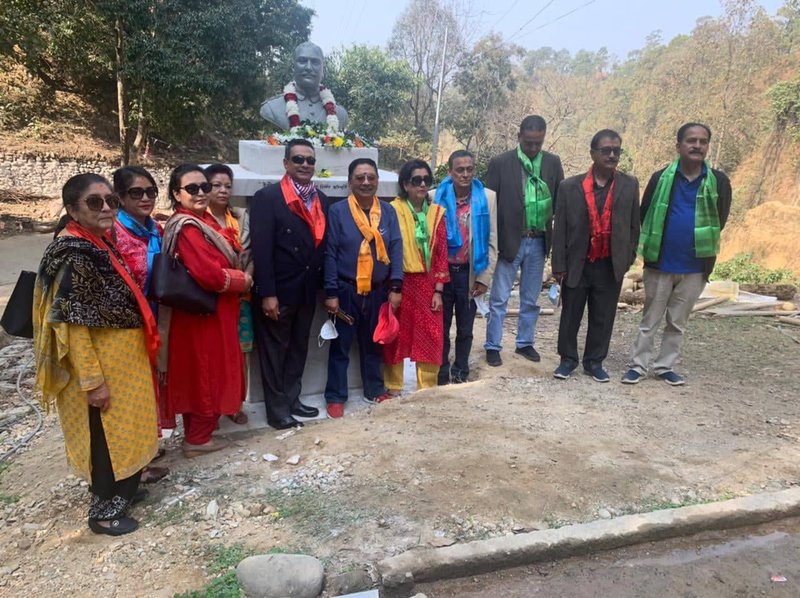 Built-in 1917, the length of Nepal’s first tunnel was 500 meters. It was built with local resources. Despite the negligence, the tunnel is still in good condition.

Built at a time when highway tunnels were a rarity in Asia, it cut travel time between Bhimphedi to the Indian railhead in Raxaul. Beyond Bhimphedi, it was possible to reach Kathmandu, three days away, by walking or on horseback.

The 500m tunnel through the Chure ridge between Hetauda and Amlekhganj was constructed by army engineer Col Dilli Jang Thapa with local resources and is still in good condition.

The statue of Chief Engineer Colonel late Thapa unveiled in a gathering of officials and local people and family members. Despite his immense contribution to modernizing Nepal, the work of the great hero of modern Nepali engineering is gradually disappearing.

Thanks to the research of Granddaughter Chanda Rana, chief engineer Colonel Thapa’s work came to the limelight.

From ropeway to the tunnel, from neo-classic architecture to hydropower, irrigation canal and urban planning, Chief Engineer Colonel late Thapa had played a key role in materializing Prime Minister Chandra Sumsher’s projects to bring change to the country.

When granddaughter Rana started the research, the Chure Tunnel, which is regarded as the first tunnel in South Asia, was in the process of demolition and destruction. With her efforts, Hetauda Sub-Metropolitan City agreed to protect the tunnel by allocating the budget for its renovation.

Centuries ago, the tunnel used to be a lifeline of Kathmandu Valley. With the construction of the tunnel, it reduces the distance as well as the difficult and fragile road of Chure region.

“Of course, my grandfather was the architect of Tunnel. I am launching a struggle to save that period of the history of Nepal,” said Rana.

The Churia Tunnel, Bhimphedi Road, and Chandra Nahar are still in good shape, neo-classic Rana Palaces, which remain a major heritage and buildings built in the Rana period, are now in the process of being demolished.

Grandson of Governor-General of Eastern Nepal Colonel Gajraj Singh Thapa and son of Colonel Harsh Jung Thapa, chief engineer Colonel late Dilli Jung Thapa opened the floodgates of development engineering. One of his memorable works is signing the agreement on the use of Chandra Nahar.

“The tunnel was built on orders of Prime Minister Chandra Shumshere Rana, and was supposed to reduce the time taken by horse-drawn carriages and lorries to travel from the Indian border to Bhimphedi,” says Col Thapa’s grand-daughter Chanda Rana, who wants to turn the tunnel into a heritage site.

Col Thapa himself was the great-grandson of Jang Bahadur Rana and got his engineering degree at the Thomson College of Engineering in Rourkee in British India. He died at the age of 52 in 1946.

Although it is not clear how much the tunnel cost, historians say the military completed the job ahead of schedule and returned the unspent budget to the treasury.

Rana, who is researching her grandfather’s life, says the government at that time was looking at several options, including a serpentine road over the Chure, a longer option around the mountain and the tunnel. Col Thapa is understood to have argued that although the tunnel would be costlier, it would save money in the long run because of lower maintenance cost.

The Chure is made up of soft sediment of sand and boulders, without bedrock, thus making it easier to drill. Parts of the tunnel are still accessible and measure 2.7m wide and 3m high just enough to allow vehicles at the time to pass.

In his book, Nepal, Swiss geologist Toni Hagen writes about seeing the tunnel during his walk to Kathmandu in 1950, expressing surprise at such a sophisticated tunnel in the largely underdeveloped country.

“Pioneer engineer Dilli Jung Thapa (my grandfather), coming from Roorkee, started reconstruction of the damaged Durbars with his advanced neo-classic designs and with a new touch. Some major reconstructions happened to old ones. Few changes were done here and there, with his brilliant engineering skill for which he had collections of branded catalogs from London, Europe, for his unique interiors, choosing chandeliers. glasses, railings to furniture to carpets to suit the various Durbars with each different pattern and style. “Daly”, he used to be called, started reconstruction and renovation from 1935 B.S. I can claim my grandfather did 80 percent of the major reconstruction and built new Rana Durbars, too after the 1934 earthquake, Lalita Niwas, Laxmi Niwas etc. Not only had he renovated Ghantaghar and undertaken many other major reconstructions of damaged infrastructure then, chief engineer brigadier colonel Dilli Jung Thapa was also the first to introduce RCC buildings in Nepal. Scared by the earthquake, Mohan Sumsher Rana requested my grandfather to build earthquake-resilient buildings with RCC inside. Laxmi Niwas and a house near Ghantaghar were built using RCC. So mostly all Rana era durbars were reconstructed by my grandfather, including Bagh Durbar, part of Sital Niwas and Belayati Baithak, along with Putali Bagaincha.

The statue of Dilli Jung Thapa was casted by sculptor Laxman Bhujel at the cost of Rs.800, 000.00 contributed by Hetauda Metropolitan. Mayor Hari Bahadur Mahat highlighted the historical contributions of late Thapa by constructing the tunnel which links Kathmandu and Terai. He said that this is the first gravel road of Nepal and the first tunnel of South Asia.

Similarly, province 3 is responsible for maintaining the part of the damaged tunnel for which tender has already been called and 30 million rupees has already been allocated for retrofit and other maintenances.

Organized by Churia Mai and Tunnel Protection Committee, Prem Bomjoing, chairman of the committee, highlighted the importance of the tunnel to be developed as a tourist spot and its historical value. Chanda Rana, granddaughter of Thapa coordinated with the Department of Archeology for approval of the Tunnel’s maintenance.

In the entire current media hubbub about proposed highway tunnels in Thankot, Sanga, and the Terai Fast Track, it may be worth remembering that Nepal’s first-ever highway tunnel was built as far back as 1917 in Hetauda.

Pedestrians used the tunnel to cross over to the other side till recently, but the army blocked it during the conflict. Parts of the tunnel collapsed in the 2015 earthquake, but the entrance is still intact. Engineers say that after repair, it could still be used for one-way motor traffic.

Thanks to the dedication and commitment of Rana, the work of Chief Engineer Colonel late Thapa was recognized after 104 years.

Chanda Rana has shown how hidden historical facts about Nepal can come to light. Chief Engineer Colonel late Dilli Jung Thapa is her great grand-father but he is also a great person in Nepal’s engineering field -- he contributed immensely in building construction, dam, road and tunnel. 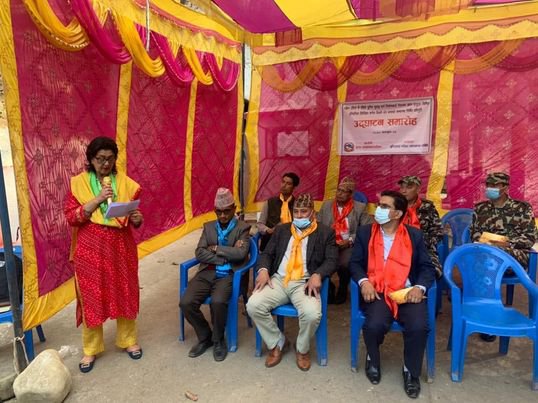 Thanks to her research and investigation of decades, the work of Chief Engineer Colonel late Thapa, who dig the first tunnel in South Asia, was recognized in 104 years.

Rana’s work shows the path of dedication for all people.