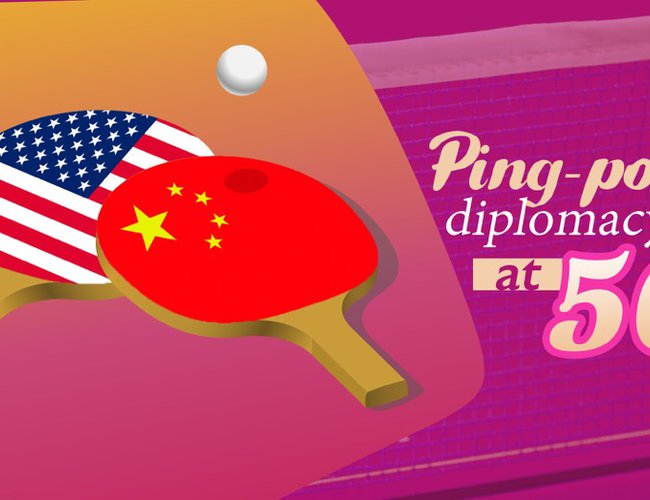 A ceremony has been held in Shanghai to commemorate the 50th anniversary of Ping-Pong Diplomacy between China and the United States.

Ping-Pong Diplomacy is known as an example of diplomacy through sports.

It began in 1971 during the Cold War, when US and Chinese table tennis players deepened exchanges between each other at the world championships in Nagoya, Japan.

That helped to improve the bilateral relationship and eventually led to the establishment of diplomatic relations between China and the US.

The commemorative event was held on Saturday with a former Chinese table tennis star, who had played in the 1971 championships, and senior officials at the US Consulate General in Shanghai taking part.

Chinese Ambassador to the US Cui Tiankai contributed a video message to the event, saying that the two sides should carry forward the spirit of Ping-Pong Diplomacy and seek common ground.

After the ceremony, Chinese and US participants took part in friendly table tennis matches by forming mixed pairs.

COVID-19 Kills Over One Million In US By Agencies 2 days, 15 hours ago

Ukrainians Forces Continues Their Fighting Against Russians By Agencies 2 days, 15 hours ago

Russia Agree To Evacuate Wounded Soldiers From Azovstal By Agencies 3 days, 15 hours ago