US: Troops In Afghanistan To Withdraw By September 11

US: Troops In Afghanistan To Withdraw By September 11 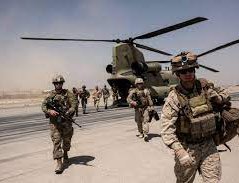 A senior official of US President Joe Biden's administration says it plans to withdraw US troops from Afghanistan by September 11.

The official revealed the plan to reporters over the phone on condition of anonymity on Tuesday. The announced deadline marks the 20th anniversary of the September 11 terrorist attacks on the United States.

The decision would miss a May 1 deadline set under the peace agreement agreed in February last year between the Taliban and the US administration of then President Donald Trump.

The official said, "There is no military solution to the problems plaguing Afghanistan," and stressed that the US would focus on supporting the peace talks.

The senior official suggested a shift of focus to the most serious security threats facing the US, including competition with China. The official stressed the need to invest personnel and resources to priority areas.

As to the potential for a resurgence of Al-Qaeda and other terrorist groups in Afghanistan after the US withdrawal, the official said it will be met with vigilance

Beijing Grapples With 'Zero-COVID' Unrest By Agencies 1 day, 4 hours ago

Anti-coronavirus Curbs Erupt In Beijing, Shanghai And Elsewhere By Agencies 2 days, 4 hours ago

6 Million Ukrainians Are Still Affected By Power Outage By Agencies 4 days, 3 hours ago