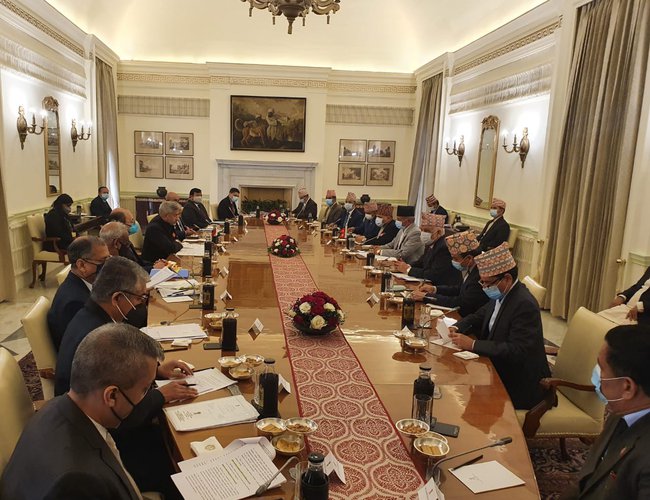 Every country pursues its foreign policy to protect its national sovereignty and promote its core interest. To protect its interest, the country also adheres to policies to condemn violence and terrorism. Nepal is not an exception.

Whether it is an oversight or policy shift, Nepal has, recently, to everyone’s surprise,did not take any notice of Maoist Terrorist attack in India.

In between, Minister for Foreign Affairs Pradeep Kumar Gyawali called External Affairs Minister of India Dr. S. Jaishankar on April 9 requesting him for the supply of COVID-19 vaccines to continue administering in the second dose.

During the telephone conversation with Minister of External Affairs of India Dr. S. Jaishankar, minister Gyawali talked about various issues. However, the minister’s statement did not mention the terrorism of a form on Nepal has its firm stands.

When Minister Gyawali called on his Indian counterpart, there was condemnation coming from different parts of the world against Indian Maoist killing 22 security personnel.

Although different countries around the world including Turkey, Bangladesh, and Sri Lanka condemned the terrorist attack, Nepal's non-committal reactions might have sent a working message.

Had foreign minister Gyawali condemned the attack, it would have made a lot of difference in seeking humanitarian support. Despite the banning of export, India announced to send one million doses of vaccine to Bangladesh and 500,000 to Bhutan. However, Nepal was missing from the list.

Prime Minister K.P. Sharma Oli and Foreign Ministry issued statement condemning the oppression of democratic activist by Myanmar's military government. Nobody understands the reason not to condemn a terrorist and violent attack in India my Maoist.

Since Nepal claims to be an adherent and supporter of peace and the country has been condemning every violent act all over the world, not condemning the violence and terrorist act in the neighborhood is not in the interest of Nepal. As India is a close neighbor, the trouble and pain in one neighbor is the pain to the other.

Foreign Minister Gyawali expressed sincere thanks to the Government of India for supporting Nepal in its fight against the COVID-19 pandemic, including through the generous gift of one million doses of COVISHIELD.

According to Ministry of Foreign Affairs, the External Affairs Minister of India assured him of continued support to Nepal in its fight against the pandemic, including through the supply of vaccines.

During the conversation, the two sides exchanged views on intensifying efforts to fight the COVID-19 pandemic.

Being a longest serving foreign minister in post 1990's government, Minister Gyawali has found a lot of time to adjust Nepal's current foreign policy to suit the changing global order.

Gyawali, a through gentleman personally, has followed the policy prepared during the cold war era. With so many changes in global and regional orders, there is the need to tune foreign policy to preserve Nepal's core interest.

Whether in close neighborhood or far away, Nepal's foreign policy is guided by individual interests. With institutional disorder due to over politicization, foreign ministry's institutional capacity has declined further.

Although Nepal established diplomatic relations facing all challenges with state of Israel recognizing the importance of sovereignty of a small country, Nepal's international support to Israel has never matched its foundation and spirit of establishing relations with Israel.

Nepal voted all the time against the core and vital interest of state of Israel. At a time when Arab countries have changed their policies towards Israel establishing diplomatic relations, Nepal is yet to tune its policy looking at the changed context.

In one of the public programs, ambassador of Israel to Nepal Hanan Goder-Goldberg humbly said, "Isn’t This the Time, Honorable Minister, That Nepal Will Make The Change In Your Voting Pattern?"

With so much of knowledge, backing of prime minister and efficient foreign secretary, whether in neighborhood or middle-east, Gyawali can make a change to protect Nepal's national interest to benefit Nepali people.