Following the populist slogans of political parties, FNCCI has also announced a populist package aiming to boost GDP to US$ 100 billion in 10 years 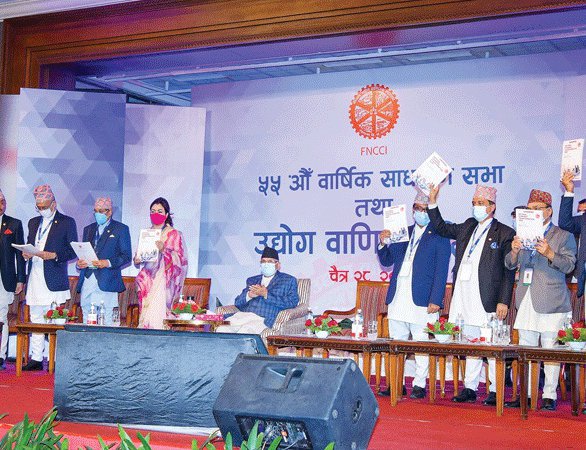 From railway to waterway, making international aviation hub to gas pipeline, Prime Minister K.P. Sharma Oli has left no populist slogan to his rivals and friends to add.

Attending as a chief guest, Oli looked a bit uncomfortable at an event of the Federation of Nepalese Chamber of Commerce and Industry (FNCCI) when its president Shekhar Golchha announced a 100-billion dollar strategy for next ten years.

The country needs to have ambitious slogans to move forward. However, it should not be unrealistic and populist. At a time when the global economy is badly hurt by COVID-19 pandemic, FNCCI’s ambitious announcement does not fit in real context.

The federation unveiled the National Economic Transformation-2030 (NET2030) with the aim of expanding Nepal’s economy to USD 100 billion within next ten years.

Prime Minister KP Sharma Oli launched the paper on the occasion of the federation’s 55th annual general assembly and the FNCCI Day-2021.

Prime Minister Oli assured that the government was committed to work together with the FNCCI and the entire private sector of the country to implement the transformative vision and provide all necessary support.

The vision paper aims to achieve a double-digit growth and create an additional 2.2 million jobs through sustainable high economic growth.

FNCCI president Shekhar Golchha said that the National Economic Transformation 2030 is an effort to drive forward the economic transformation in the country through active multi-stakeholder participation and cooperation and a highly engaged private sector.

“Based on the three vision goals, the NET 2030 has identified 19 key focus areas and 100 initiatives. Efforts have been made to define the roadmap to extend and integrate the past and present work of the FNCCI and the government,” he said.

While implementing the vision paper effectively, about 150 billion dollars will be invested.

Of this, 108 billion USD will come from the private sector. Currently, the country's economy is worth USD 34 billion.

Golchha said that 40 out of 100 schemes prepared by the federation could be implemented within two years.

He urged the government to increase the budget in the productive sector by cutting unproductive expenditure rather than increasing the size of the budget.

The vision paper also calls for reforms in 14 different laws, he said.

He said that one or two year’s of hard work is not enough to transform Nepal into a prosperous nation, which requires a decade-long vision, clear planning and effective implementation.

Dhakal said that joint effort from the government and the private sector was a must to implement the vision paper effectively.

The vision paper has explored the possibilities and potentialities in the agriculture, service and industry sector for economic growth, employment and reduction of trade deficit in Nepal. He said that this document would be a milestone for economic transformation and prosperous Nepal.

Various speakers highlighted the importance of the pronouncement saying that it is achievable. However, the time has come for FNCCI leadership to show that their slogan is not just merely a populist document.

Indian Oil To Supply NOC Fuel From Barauni By Agencies 10 hours, 54 minutes ago

BIO-GAS : Three In One By Keshab Poudel 1 day, 8 hours ago

Private Sector And Government Need To Work Together: Dhakal By Agencies 1 day, 10 hours ago