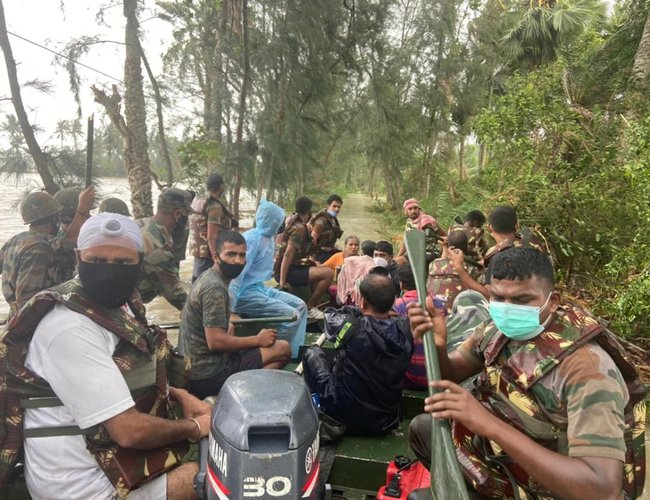 Cyclone 'Yaas' has left a trail of destruction in Odisha and parts of the coastline in Bengal, where the cyclonic storm made landfall on Wednesday morning. After hitting the shores, the cyclonic storm kept battering the eastern coast as cars, mud houses, trees were seen flying in various videos that surfaced throughout the day. In some places, main communication routes also got submerged underwater.

Cyclone Yaas made its landfall in Odisha on May 26 noon and battered the coast with strong winds and heavy rainfall on the coastline of Odisha and West Bengal. It is very likely to move northwestwards across interior Odisha and weaken gradually. A total of 113 teams of NDRF, the highest ever number of team for cyclones have been earmarked/deployed in five states and the UT as part of its preparation and response to the cyclone. Teams are constantly carrying out rescue and restoration work post cyclone in coordination with state and district administration.

Cyclone Yaas killed at least four people and left behind a trail of damaged homes and flooded farmland, forcing more than 21 lakh people to be evacuated to safe shelters in the states of West Bengal, Odisha and Jharkhand. However, the two state capitals, Kolkata and Bhubaneshwar, were saved from the wrath of the cyclonic storm, though the two cities witnessed heavy rains and high winds. Three of the four lives claimed by Yaas, were from Odisha which bore the brunt of nature's fury, while one was from West Bengal.3. Lokh Sabha speaker Om Birla urged MPs from Odisha, West Bengal and other states affected by cyclone Yaas to help the people in this crisis and make efforts to alleviate their sufferings by providing support to them.

As the cyclone hit the land, rainfall in the region has led to the inundation of low-lying areas. Many people, who were trapped, were rescued by the NDRF including an infant and a family of three, whose house was collapsed due to heavy rain in Odisha. While hundreds of stranded people were rescued from West Bengal, three persons were saved from drowning. NDRF has evacuated thousands of people to safer places in close coordination with local administration in both the states.

Even amidst Cyclone Yaas, the transportation of Liquid Medical Oxygen continues. Four oxygen tankers on way from Angul to Hyderabad and Visakhapatnam, and two from Jajpur to Berhampur and Bhubaneswar, are under close supervision and escort of Odisha Police.

Jamujhadi Road in Bhadrak District got submerged due to heavy rainfall, leading to access issues. Quick Response Teams have taken immediate action to facilitate the passage of water and will restore the road after the water recedes.

Rescue operations are still continuing as many trees and electric poles are uprooted after the cyclone hit areas. Teams, which are deployed on the ground, are removing these uprooted trees from the roads to keep communication lines clear. Rescuers are making all-out efforts to bring normalcy to the areas. Director-General, NDRF, Satya Narayan Pradhan urges people to restrict their movement till the situation becomes normal and take proper precautionary measures while returning to their homes.

The Cyclone Yaas had put the Kolkata Port authorities on tenterhooks for some time as the rising water of the Hooghly river surpassed the height of the external lock gate of its Haldia Dock System, leading the draught level to go up to around eight metres on Wednesday, an official said. However, water entered into the lock barrel, the area between external and internal lock gates for not more than 30 minutes. There was no damage to ships or assets of the Haldia Dock system in Purba Medinipur district, port chairman Vinit Kumar said.

Chief minister Naveen Patnaik announced 7 days of relief for all families of 128 marooned villages in the cyclone-affected districts. Major roads will be restored for communication in the next 24 hours. Teams will also work on restoring 80% electricity supply in affected districts in the next 24 hours. The chief minister congratulated all the panchayat representatives, district administration, community organisations and police for their excellent work in evacuation. The CM also thanked doctors and health workers for continuous health service in the affected districts during the cyclone.