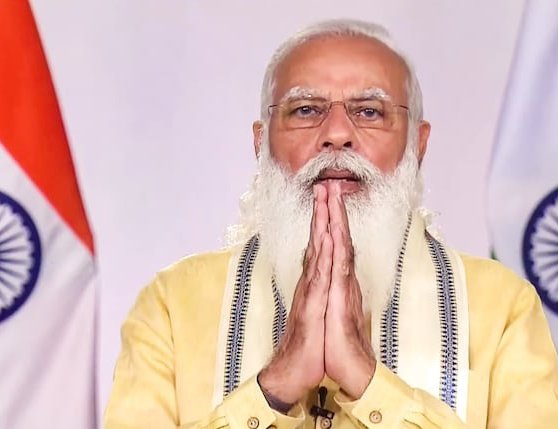 Indian Prime Minister Narendra Modi said on Monday that the Indian federal government would provide COVID-19 vaccines free of charge to all adults from later this month in an effort to turn the tide of a pandemic that has killed hundreds of thousands in India.

Modi said in a televised address that the federal government would take over the task of vaccination from state governments.

"It has been decided that from June 21, all adults over the age of 18 will be vaccinated for free," he said.

In his address to the nation on Monday, Prime Minister Narendra Modi made key announcements about the country's vaccine policy while also urging Indians to continue to adhere to Covid-appropriate behaviour.

Prime Minister Narendra Modi addressed the nation on Monday on the Covid-19 situation in the country. While tracing India's vaccine policy since the beginning of the pandemic, the PM also made key announcements concerning the procurement of jabs by states.

"Our battle with the second wave of corona still continues. Like other countries, India has also witnessed severe hardship and many of us lost our loved ones and acquaintances. My sympathies are with such families," PM Modi said.

PM Narendra Modi said that the virus is like an "invisible and form-changing enemy".

Covid protocols are still the most important weapon in fighting this enemy, he said, underlining the need for face masks, hand hygiene and social distancing.

"Curfews are being relaxed but that does not mean corona is gone," said the Prime Minister.

Many people are spreading misinformation about vaccines, said PM Modi. He requested youngsters to counter vaccine hesitancy by spreading awareness.

He went on to add that Covid-19 is the biggest pandemic the advanced world has faced in the last 100 years. A new healthcare infrastructure was set up to counter the pandemic, said the Prime Minister, highlighting the construction of Covid hospitals and expansion of network of testing labs.

The demand for liquid medical oxygen (LMO) rose in April-May like never seen before in India's history, said PM Modi.

He added that work was done on "war footing" to address this shortage and all arms of the central government, including the railways and Air Force were put to work for this purpose.

"LMO production was increased by more than 10 per cent. Whatever could be procured from anywhere in the world was brought and production of important medicines was scaled up," the Prime Minister said.

Countries and companies that manufacture vaccines in the world are limited, PM Modi said.

He remarked, "Imagine if we did not have Indian-made vaccines? What would have happened in a vast country like India? If you look at the previous 50-60 years, it took decades for India to get vaccines made in other countries."

Referring to Centre's Mission Indradhanush, the Prime Minister said India's vaccine coverage post-2014 was 60 per cent. "At that pace, it would have taken at least 40 years to vaccinate the entire population," he added.

Prime Minister Narendra Modi said the government had started working on logistics even as scientists were working on Covid-19 vaccines in 2020. A national vaccine task force was constituted last year, he added.

"The government extended all possible support to vaccine makers; they were helped in clinical trials and funds were given to them for Research and Development (R&D)," said PM Modi.

He added that vaccine supply in India is set to increase. "Seven companies are producing different vaccines and another three vaccines are in the advanced stage of clinical trials. Procurement of vaccines from other countries has also picked up pace," he said.

Some experts have expressed concerns about children, said the Prime Minister, adding that two trials for Covid-19 vaccines for children are also underway.

"Research is underway on a nasal vaccine. If we get success, it will considerably improve the pace of vaccinations," said PM Modi.

Suggestions were sought from chief ministers and parliamentary parties and it was decided that healthcare workers, frontline workers, and vulnerable groups would be given priority, he said.

"What would have happened if nursing staff, ambulance staff, hospital cleaners had not been vaccinated? It was only because they were vaccinated that they were able to save the lives of countless Indians," said PM Modi.

The Prime Minister said questions were asked about why state governments had not been given any powers. "One size does not fit all," he said, recalling the criticism. This is why localised lockdowns were permitted, he added.

India's vaccination drive was being conducted under central supervision between January 16 and until the end of April, said PM Modi. "States then asked that the vaccine process be decentralised and 25 per cent of work was given to them," added the Prime Minister.

"Today, it has been decided that the Centre will take over the 25 per cent vaccination procurement handed over to states earlier," said PM Modi.

He added that from June 21, which is also International Yoga Day, the central government will give Covid-19 vaccines to all states. This means that the Centre will procure 75 per cent of all vaccines produced in India and supply them to adults free of cost.