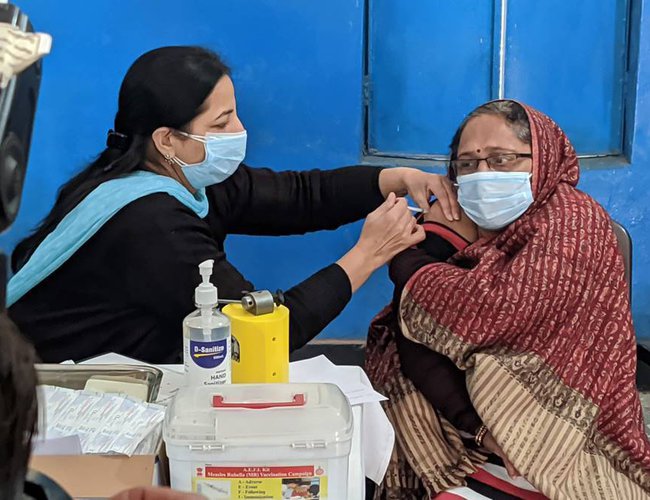 \Under the government's new vaccination policy that came into effect on Monday, the Centre will procure 75 per cent of the vaccine stock from the open market and distribute it to states, to be administered free to everyone of age 18 years or older at government vaccination centres.

As India returned to centralised procurement and distribution of Covid-19 vaccines, it reported 82.70 lakh vaccinations on Monday, a daily record by far since the vaccination drive was launched on January 16.

Under the government’s new vaccination policy that came into effect on Monday, the Centre will procure 75 per cent of the vaccine stock from the open market and distribute it to states, to be administered free to everyone of age 18 years or older at government vaccination centres.

The remaining 25 per cent is meant for private hospitals and vaccination centres, which can levy a service charge of Rs 150 over and above the price of the vaccine.

“Today’s record-breaking vaccination numbers are gladdening. The vaccine remains our strongest weapon to fight COVID-19. Congratulations to those who got vaccinated and kudos to all the front-line warriors working hard to ensure so many citizens got the vaccine. Well done India,” Prime Minister Narendra Modi said in a tweet.

There were two main reasons for the surge in vaccination numbers on Monday, top government sources monitoring the drive told The Indian Express: increased vaccine supply to states after the new guidelines went into force; and an increase in the number of free vaccination sites.

“First, we gave 2.95 crore doses to states to vaccinate any citizen who is above 18 years for free. Second, the capacities deployed by the states have been huge. More than 80,000 government vaccination centres were operational today,” a top source said.

The spike in vaccination numbers should be seen within the “framework of availability” of vaccines, officials said.

The Indian Express had reported on Sunday that as a result of Serum Institute of India (SII) and Bharat Biotech ramping up capacity at their manufacturing facilities, the availability of vaccines would touch 12 crore doses by the end of June from around 7.5 crore doses in May — and that around 13.5 crore doses would be available in July.

“The supplies to states have got streamlined. The artificial categorisation of recipients into ’18-44 years’ and ’45 years and older’ is gone. Everyone knows that you no longer need to book an appointment in advance. Large numbers of people are making use of the option of on-site registration,” an official said.

Pointer to way ahead

Monday’s record vaccination underlines that effective separation of responsibilities will hold the key to success for the mass inoculation drive — that while states focus on planning and executing vaccination coverage, the Centre works on streamlining supply and availability of vaccines.

However, the numbers of Monday are not expected to be achieved daily. Sources said that with the increase in vaccine supplies in July, the Centre expects states to administer an average of 45 lakh shots per day.

“States have now established a baseline of around 45 lakh [vaccinations] a day on average. There would be days where they would do maybe 60-70 lakh. There is no reason not to, if vaccine availability does not fall — which we do not see happening,” the official said.

Preliminary official figures show a total 82,70,191 doses were given to recipients across the country on Monday.

The Centre changed the inoculation guidelines after several states said they were finding it difficult to manage the funding, procurement, and logistics of vaccination.

Sources said the Centre expects a stable increase in vaccination numbers due to the 30-day advance visibility of vaccine supply.

“All states know what supplies they will receive in July. We got them the formal visibility on Sunday. The states will be planning accordingly,” a source said.

According to the new guidelines, the Centre will communicate in advance to states the number of doses that will be made available, and states will be required to put this information in the public domain at the levels of district and vaccination centre, and disseminate it widely.