Suarez, Cavani And The Sad End To Uruguay's Golden Era

Suarez, Cavani And The Sad End To Uruguay's Golden Era 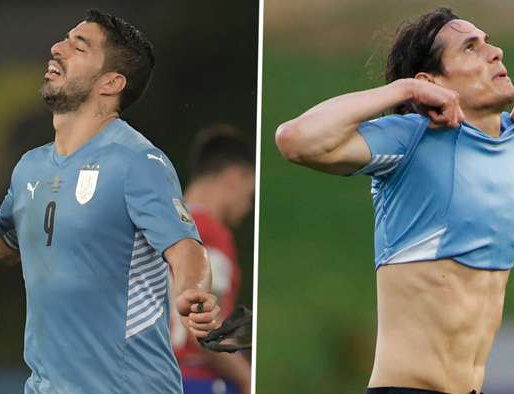 Fresh from their fine campaigns in the Premier League and La Liga respectively, one might have expected the deadly Uruguay duo of Edinson Cavani and Luis Suarez to pick up right where they left off in international colours.

Instead, the vastly experienced Manchester United and Atletico Madrid strikers now find themselves fighting for their lives to keep the Celeste afloat in the competition, as a seemingly tired, ageing team struggles to make an impact in the Copa America.

A decade has now passed since Uruguay last lifted the oldest international trophy in world football, destroying Paraguay 3-0 in the final in Buenos Aires' Estadio Monumental.

Much has changed in that time, with stalwarts like Diego Lugano, Diego Perez, Maxi and Alvaro Pereira and the brilliant Diego Forlan hanging up their boots, but there are still plenty of links with that brutally efficient team.

Fernando Muslera remains the last line of a defence which includes Lugano's old partner-in-crime Diego Godin, now ably accompanied by former Atletico colleague Jose Gimenez – while 74-year-old Oscar Tabarez remains on the bench even as he continues to battle Guillain-Barre syndrome, which has left his mobility severely affected.

Up front, meanwhile, Cavani and Suarez, both 34, boast 240 caps and 115 goals between them, as well as an enviable collection of titles at club and international level.

But not one of those goals has come in 2021 and the pair have found that their class and undimmed enthusiasm in the sky blue shirt has so far not been enough to snap the nation out of its footballing slump.

Uruguay went scoreless in both of their June World Cup qualifiers against Paraguay and Venezuela and could not even muster a single shot on target as they went down 1-0 to Argentina last Friday to kick off the Copa on a low note.

That duck was finally broken against Chile on Monday, but only via Chile's Arturo Vidal, who put past his own goalkeeper under pressure from Suarez to mark the Celeste's first goal in five games.

With just one point so far, the country needs a positive result against Group A bottom-dwellers Bolivia on Thursday to get back on track. An upset would leave them in danger of failing to qualify for the knockout stage – an eventuality that would be close to a national catastrophe.

In the opinion of Lugano, Uruguay's captain during their 2011 triumph, the replacement of warriors such as Perez in the engine room with the more cerebral talents of Rodrigo Bentancur and Lucas Torreira has blunted their famously in-your-face edge, while failing to provide a creative spark to compensate.

“If Uruguay don't score, it will be an historic goal drought,” the Celeste legend Lugano warned Como te va prior to the Chile match.

“We are not creating and I think it owes to the attempt to change the Uruguayan style. Now, we have a more delicate midfield, more possession-oriented. Uruguay's play has always been more rapid and direct to the area.”

Like many of their South American peers in recent years, Uruguay have had to face up to the fact that their star names from the beginning of the last decade are reaching the end of the line.

That renewal has been gradual and straightforward for Tite's Brazil and rather more brusque for Argentina, where Lionel Scaloni's arrival in 2018 heralded a sudden end for most of the previous generation.

Other countries, such as Chile and Colombia, have made little progress in that respect, with seven of the Roja's starting line-up as they drew 1-1 with Uruguay over the age of 30 and just three of Reinaldo Rueda's 27-man squad aged 23 or under.

Uruguay, meanwhile, have achieved only partial success in their renewal efforts.

Gimenez, Torreira, Bentancur and Real Madrid gem Federico Valverde have all established themselves as first-team regulars, while Sao Paulo wing-back Matias Vina has impressed on the left flank. Penarol's Facundo Torres, 21, made a big impact off the bench to help his side claim a draw against Chile.

While some of the names on the pitch have changed, though, the big problem seems to be that Tabarez's famously conservative mindset remains unyielding.

Expecting the new generation to play the kind of uncompromising football Lugano remembers is akin to jamming square pegs into round holes, and has failed to produce results.

Without the rush and hustle of previous Uruguay sides, this team is failing to create the chances Cavani and Suarez need in the box. Therefore, the intermittent presence of Flamengo's Copa Libertadores winner Giorgian de Arrascaeta – the closest thing they have to a natural playmaker – is puzzling to say the least.

“We have to create dangerous situations,” Tabarez admitted to reporters. “We are not creating more for Luis Suarez and Edinson Cavani.”

Speaking before their Copa debut, Suarez also recognised the problem: “We are not happy with the qualifiers, it is not what we wanted, because apart from the poor results, we were also lacking in terms of our play.”

Fragile Bolivia stand out as the perfect opponent to regain that lost confidence and touch in front of goal, while realistically Uruguay must down both the Verde and Paraguay to take one of the top two places in Group A and avoid an early knockout clash with all-conquering Brazil.

In the medium to long-term, meanwhile, it is clear that something must change. Uruguay currently cling to the fourth and final automatic qualifying place for Qatar 2022 in the CONMEBOL region.

However, they are without a win or goal in their last three qualifiers and are closely trailed by Colombia, Chile and Paraguay – all of whom are unsurprisingly desperate to make the cut for the World Cup.

Next year's finals will be Suarez and Cavani's last, and it would be sad indeed to see their stories end by crashing out of the Copa and missing the boat for Qatar.

They have the ability to continue to push the Celeste forward, of course, and no side is more dangerous when labelled as the underdog. Unless big changes are made, though, their sparkling careers are at risk of ending in disappointment.

South Korea Reaches To Knockout Round Defeating Portugal By Agencies 1 day, 3 hours ago