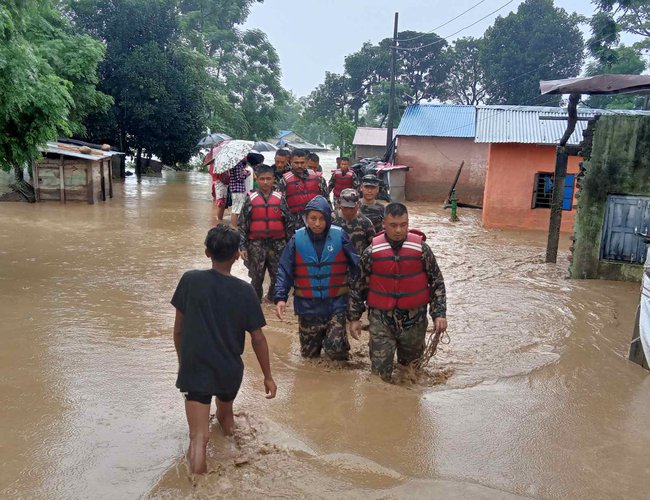 The National Disaster Risk Reduction and Management Authority (NDRRMA) has said that 34 people had been killed, 30 have gone missing and 32 have been injured as of July 2,

The authority said that the monsoon, which entered Nepal on June 11 this year, has impacted 32 districts across the country.,

RSS adds Of the deceased, five died in Sindhupalchok district, four in Doti, three in Rolpa, two each in Chitwan, Tanahun, Pyuthan and Rautahat and one each in Lalitpur, Saptari, Kavrepalanchok, Sidhuli, Gorkha, Jumla, Argakhanchi, Dang, Palpa, Kaski, Kalikot, Panchthar, Bajhang and Bajura. Search for the missing ones has been continued, said the police spokesperson Basanta Bahadur Kunwar.

Over 1,200 people were rescued from different parts of the country, he said. Four thousand nine hundred and fifty-five people got displaced.

Many roads have been blocked due to flooding. Three hundred ninety-seven houses were flooded and 491 houses, 84 animal sheds, 38 bridges, three school buildings and 10 government buildings damaged. Rescue and relief works are underway, said the police.

Joint Secretary and Spokesperson for NDRRMA Bishwa Prakash Aryal said that search, rescue, relief and rehabilitation works had been carried out for all those affected people and that impact-based early warning system had been installed in 36 municipalities of nine districts.

He added that the road sections of Sunsari, Morang, Parsa, Sindhupalchowk, Makwanpur, Sindhuli, Lalitpur, Tanahun, Lamjung and Bajura districts had been blocked and that the road division offices and local levels were working to open them.

Aryal said that arrangements were made to send money immediately for the construction of temporary shelters for those affected by the recent monsoon floods and landslides. Those victims whose houses were completely damaged will get Rs. 50,000 in the first and the second tranches to build their temporary shelters.

He also informed that the first installment of Rs. 197.73 million has been sent to the district disaster management fund for the reconstruction of 3,349 houses in 20 districts affected by last year’s monsoon rains.

Based on The Rising Nepal

Earthquake In Doti: Nepal Army Is In Rescue Operation, 200 Aftershocks So far By NEW SPOTLIGHT ONLINE 3 weeks, 4 days ago

Earthquake In Sudur Paschim: Six killed In Doti By Agencies 3 weeks, 4 days ago