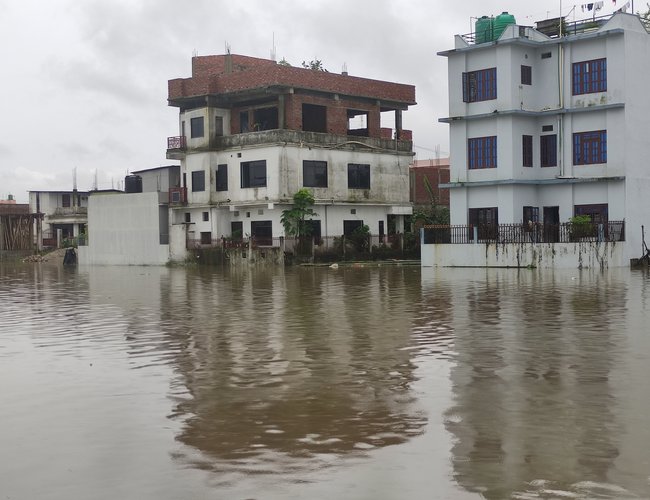 As many as 35 houses of Jhapa have been waterlogged when the rain-triggered floods in the rivers sneaked into the human settlements.

According to Chairperson of Nepal Red Cross Society, Jhapa, Lokraj Dhakal, the demolition of the dam along the Bering River has put 20 houses under siege and also risked the surrounding human settlements.

Likewise, the flood-fed Ratuwa River is likely to enter into the settlements from Bulabathan of Gauradaha municipality-5. Various parts of the district have been inundated due to incessant rainfall and its details are yet to be reported, he added.

Similarly, the swollen Kankai River has put at high stake the entire community of Shivasatakshi municipality-5. The Armed Force Police team has been kept on standby for the rescue of waterlogged households’ members, said APF’s SP Ramesh Prasad Pandey.

Meanwhile, the Meteorological Forecasting Division has issued flood warnings and called for precaution in settlements near the rivers and rivulets in the district.

The Division, in the warning it issued this morning, said continuous heavy rainfall is taking place at many places of Ilam and Jhapa districts which might trigger floods in the rivers and rivulets passing through the district.

It stated that there was the possibility of floods in the Mechi, Kankai, Biring, Ninda and Ratuwa rivers as well as other streams and brooks in the district.

The weather station at Chandragadhi Airport, Bhadrapur recorded 116.6 millimetres of rain in the district in the last 24 hours.