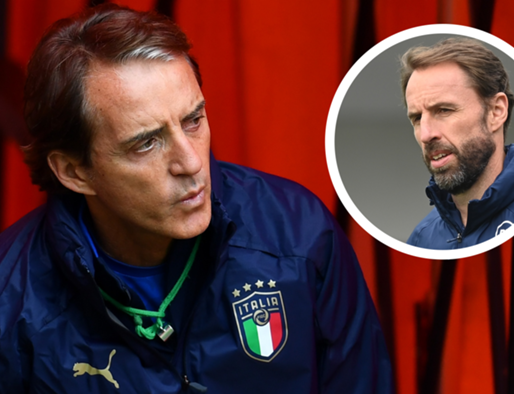 Gareth Southgate has lauded the work of Roberto Mancini in making Italy virtually unrecognisable from the squad he encountered in his playing days, warning of the threat Mancini's modernised system poses.

Given Italy's strength, Southgate said his team must play at their best in order to have a chance of securing victory.

The England boss believes the Three Lions and the Azzurri are the two best teams of Euro 2020 and deserved foes in the final on Sunday.

"They've got a very clear way of playing, great spirit, great energy in the way they play, tactically like all Italian teams very good, but also the style of play is probably different to the Italian teams from when I was younger - very modern," Southgate told Sky Italy.

"I've been watching them closely for two years, because I know the job Roberto Mancini was doing.

"It's an exceptional team and I think, without doubt, the two best teams in the tournament have made the final."

"In the games that I've seen, they look so strong defensively but also have got fantastic players going forward that can hurt teams and score goals and create chances," said the England midfielder. "So it's a very tough game and a difficult game for us, but at the same time I feel like if we perform to the levels we are capable of, then we can cause them problems as well."

Mancini took over after Italy failed to qualify for the 2018 World Cup, and he's led a run of 33 straight unbeaten matches.

Contrary to the stereotype of Azzurri teams being plodding and defensive, this group presses high up the pitch and scores goals in bunches. They've notched 12 goals in six matches at the tournament.