As interlocking bricks drastically reduce carbon emission, the brick produced by the women in Mangalsen will support Nepal's national commitment to the global climate change agenda as well. 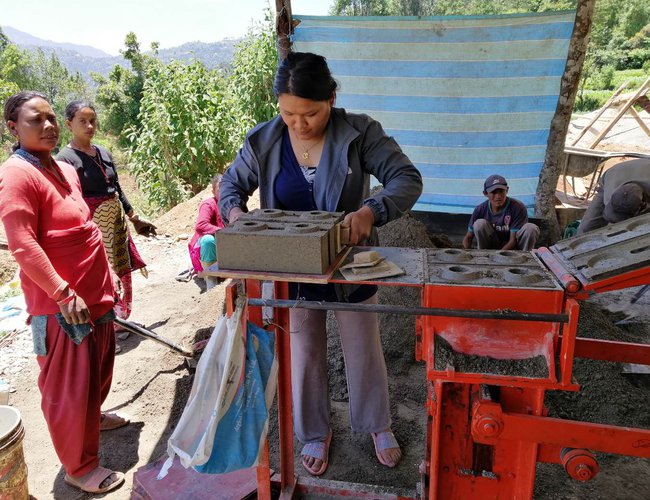 A startup enterprise on Compressed and Stabilized Earth Bricks (CSEB) has excited the Dalit women's group of Mangalsen Municipality of Achham District about new livelihood prospects. From being mostly homemakers and busy in farming, they are looking forward to this opportunity, hoping it will help them with employment and livelihood support. The startup bets on developing innovative green technology in the area for the first time.

The interlock brick factory, as it is called, is set to be operated under the ownership of Sahakarmi Mahila Udhyami. The working modality has already been prepared. The processes to register the industry at the local level and PAN registration have already begun. This was all possible because of the support by PARIWARTAN, which is the short form of Participation, Inclusion and Wider CSOs' Actions for Responsive, Transparent and Accountable Local governance in Nepal. PARIWARTAN is a project of DCA, which is funded by the European Union (EU) and implemented by local partner NGO, Malika Development Organization Nepal (MDO-Nepal).

"We have been working in collaboration and partnership with DCA's local partner MDO-Nepal. This is the reason the Municipality board allocated Rs.150,000 too, but later, in consultation with the group and experts, we have allocated additional Rs. 350,000 to build a trust-building, so that the women can produce more bricks and can store them as well. We are also implementing a climate adaptation and mitigation program at the local level and the project is on par with our program," said Mayor of Mangalsen Municipality Padma Bahadur Bohara.

As interlocking bricks drastically reduce carbon emission, the brick produced by the women in Mangalsen will support Nepal's national commitment to the global climate change agenda as well. Thus, the new initiative taken at Mangalsen is highly significant in the national context, as it supports climate change and reaches the far western region of Nepal, parts of which are still inaccessible and away from the latest technologies.

By supporting the initiative to establish the brick factory, PARIWARTAN has shown a way for forging partnership and collaboration among local levels, the development partners, local NGO and community-based organizations and supporting Nepal's effort to establish green industries with the participation of women.

Introduced in 2015 with the funding of Nordic Climate Facility (NCF), DCA, Practical Action and Build Up Nepal successfully popularized CSEB technology in Nepal through their joint project, New and Affordable Building Materials (NABIN).

With the funding from EU, DCA and Community Impact Nepal (CIN) are now supporting the establishment of CSEB as part of ongoing PARIWARTAN and Enhanced Action of Inclusive CSOs for Participation in Climate Resilient Economic Growth (UTHAN) projects in the Sudurpaschim and Karnali Provinces through districts with local partners – NNSWA, SOSEC, and MDO.

A returnee from South Korea, Ghanashyam Joshi, who is a resident of Dhangadhi Sub-Metropolitan, has been able to capture a good market share in Kailali within a short period, so much so that he even led the formation of the CSEB interlocking brick association in Province 7. 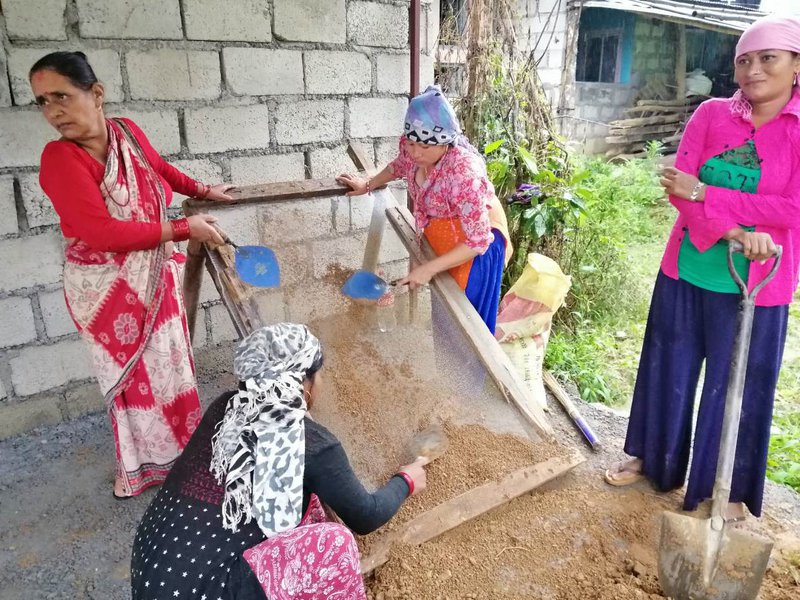 "Given the technical support from CIN and financial support from DCA and other support from local government, I am confident that we will replace the traditional bricks in a few years. Since CSEB is based on a simple technology, it can be easily produced. People are also very interested in this new technology," said Joshi.

After facing the upsurge of COVID-19 pandemic in foreign countries, Pradip Kumar Tharu wanted to start a small business to support his family back home without needing to go abroad for job again. Supported by DCA and Community Impact Nepal (CIN), Tharu started his CSEB technology enterprise a year back. "As the demand for low-cost bricks is going up, my entire family is now running this enterprise, including my brothers. Instead of going abroad, I am here with my family and we are making enough profits to run our business and sustain our family needs. Things would have been difficult if I was away from family in such a pandemic situation otherwise," said Tharu.

Thanks to the European Union-supported UTHAN and PARIWARTAN, the livelihood prospects of people like Tharu and Joshi of Surdurpaschim and Karnali Provinces, have visibly transformed with CSEB-technology. The technology is eco-friendly and safe to build houses at low cost and at the same time able to generate employment for local community people.

As COVID-19, has forced many migrant workers to return home, the demand for local jobs is growing, and this could just be the right choice. Provincial Governments and Local Governments in two provinces have also backed the promotion of climate-friendly brick technology.

Similarly, Laljhadi Rural Municipality has also decided to promote the interlocking bricks in its area and announced necessary support for individuals wanting to produce them.

Madsen Badayak, Mayor of the Rural Municipality, shared, "We are collaborating with the local NGOs to introduce an upgraded version of the technology to produce interlocking bricks, as we hope to achieve mitigation goals, address air pollution, and reduce local impacts while significantly contributing to reduce global warming."

In this regard, the collaboration and partnership among DCA, CIN, provincial governments, local governments and the local community in Sudurpaschim and Karnali Province to promote interlocking brick technology have already started.

"As the policy of the Province, we are promoting and encouraging CSEB technology in the region for green development and employment generation," opined Bharat Prasad Shrestha, Spokesperson of Ministry of Industry, Tourism, Forest and Environment of Sudurpaschim Province. "We want to collaborate with development agencies, and business entrepreneurs to promote this technology."

Scaling up and Innovations

With the successful learning experiences, DCA and CIN are now transferring this technology by scaling it up in Karnali and Sudurpaschim Provinces. The factory proposed to be established in Mangalsen, Dailekh, Doti, Achham, Kailali, Kanchanpur and Bardiya will be different from the earlier ones in terms of the use of materials and the size of bricks.

According to DCA, it will introduce innovations and value-additions to promote the CSEB technology, making it further cost-effective, eco-friendly, and lowered adaptation barriers.

The new scale-up technology will become accessible to the population living in both lowlands and mid-hills in the provinces and contribute towards carbon reduction while increasing competitiveness with the existing climate-unfriendly products. 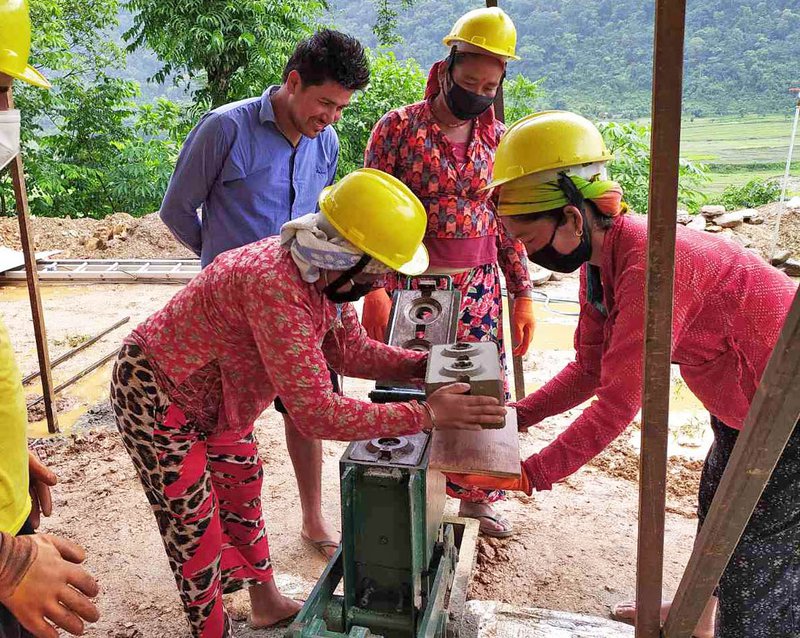 "Along with friendly local materials, our innovation projects will further improve technology to increase adaptation, improve quality and reduce CO2 emissions," said Rigendra Khadka, Program Manager - Resilient Livelihood of DCA. "We are working to improve the quality of bricks through a new process of a soil test, a mobile app and a brick test in remote locations," he informed. "We use the new technology – a mobile app with instruction videos so that masons and brick makers can always go and check to remember what was taught in the training."

DCA and CIN, through the innovation projects, are also working to reduce cement content by adding another stabilizer. Cement is the most expensive component in the brick-mix, especially in remote areas due to high transport costs. Cement also needs a sandy mix which can be a big problem in remote areas if sand is not available nearby.

DCA, CIN and their local partners are also preparing to launch a mobile app targeting local entrepreneurs. One of the features of the app also includes the cost calculation of houses made with CSEB and fired bricks. This helps them to see the differences in the cost and choose what suits their budget.

The promotion of CSEB technology also supports Nepal's climate change policy which focuses on the mitigation efforts targeting for the next decade to reduce emissions and support vulnerable communities to adapt to the impacts of climate change. The Second Nationally Determined Contribution (NDC) document submitted to the UN Framework on Convention of Climate Change (UNFCCC) secretariat in December 2020 clearly talks about this where Nepal has expressed its commitment to shifting from the traditional brick kiln manufacturing to an interlocking brick factory entirely in the next 20 years.

In line with it, the Ministry of Forest and Environment has adopted a policy to support the production of clean and sustainable bricks by optimizing learning and adopting cleaner technologies. The provincial and local level governments are also promoting sustainable and green bricks in the construction sector.

"Ministry of Forest and Environment has already issued circulars to the provincial and local levels regarding Nepal's current position and proposal of NDC. The Ministry believes that replacing the traditional brick kilns with interlocking bricks will help reduce air pollution contributing to climate change," affirmed Dr. Buddhi Sagar Poudel, Spokesperson of the Ministry of Forest and Environment.

According to a study, compressed earth blocks require anywhere from 1/5 to 1/15 of the energy for production when compared to fired bricks and concrete masonry units. On average a small 3-5 room house built with CSEB saves 4, 58-ton CO2 emissions compared to fired bricks. According to a recent study by the World Bank, fired brick is responsible for 37% of CO2 emissions in Nepal and also a major source of air pollution and black carbon. The world-renowned research institute on earthen structures – Auroville Earth Institute – has made research showing that walls built by earth bricks are emitting 4 times less CO2 compared with fired bricks. (56.79 Kg per m3 compared to 230.06 Kg per m3 for kiln-fired brick) 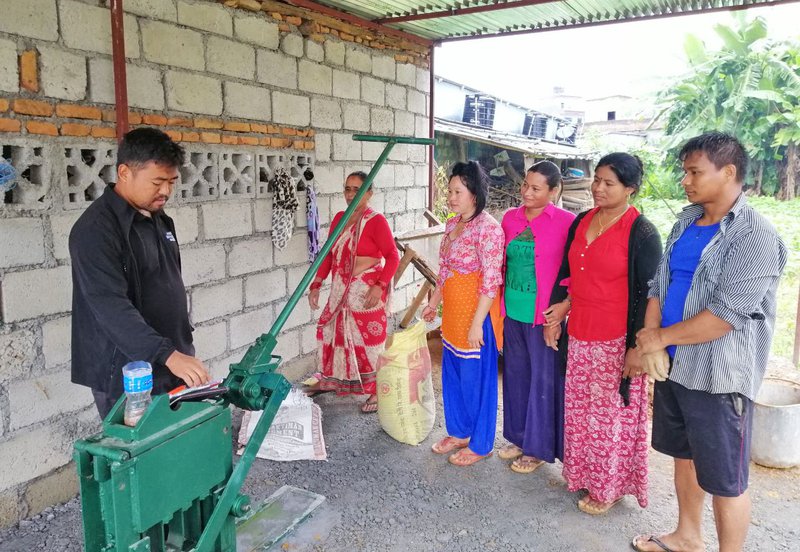 According to a report of the World Bank published in 2014, the current CO2 footprint per capita in Nepal is only 0, 3 tons.

DCA, European Union and Community Impact Nepal have been promoting climate-friendly bricks for green growth. By 2022, at least 30 such green enterprises will be established in Karnali and Sudurpaschim Provinces.