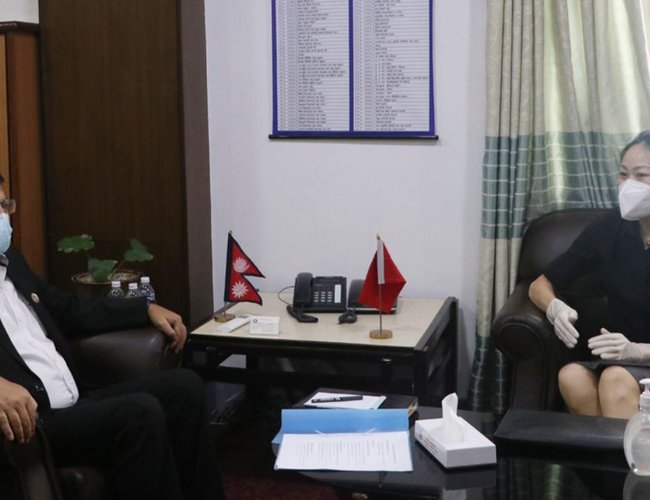 During the meeting held at his office in Singha Durbar, the Finance Minister thanked the Government of China for its assistance to Nepal during the COVID-19 pandemic and in the post-earthquake reconstruction drive.

On the occasion, the Minister expressed his hope that Nepal would continue to get support and cooperation from China in the future, too.

Stating that COVID-19 vaccine to the Nepali citizen was the topmost priority of the hour of the government, the Minister had thanked China for 1.8 million doses of vaccine that it provided to Nepal in assistance.

"Nepal has proceeded towards the procurement of additional doses of vaccine from China," he said, hoping to get support and facilitation from the ambassador towards that end. He also promised to take initiation to sort out probable problems in the implementation of China-funded projects in Nepal after monitoring and completing the projects on time.

He assured that the government would seriously carry out its role required for the under-construction road, hydropower and airport projects which have the investment from China.

During the meeting, the Chinese Ambassador congratulated Sharma for his appointment on the post and said China's policy and perception towards Nepal would remain the same no matter who was in the government, the Secretariat of the Finance Minister said in a press note.

Stating that the people of China and communist parties there and the Nepali people and political parties here had a good relationship, Ambassador Hou said China was with Nepal in the fight against COVID-19 pandemic. As she said, China had earlier provided 1.8 million doses of COVID-19 vaccines to Nepal in grant and it would be soon receiving additional 1.6 million doses.

Likewise, China has assisted different 25 post-quake projects in Nepal and some percentage of the work of has been completed, according to the Ambassador "The Durbar High-School Project has been completed, the works on the rebuilding of Basantapur-based Nine-Storey Palace' are about to complete and works of other remaining projects are expected to be over soon.''