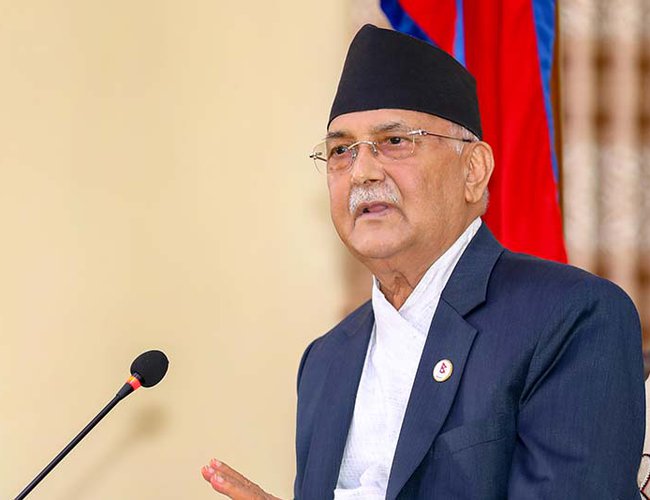 Observing carefully and quietly all the activities of Sher Bahadur Deuba led coalition government, former prime minister and leader of CPN-UML K.P. Sharma Oli finally came out to slam the government on its Common Minimum Program.

Announced by the leaders of four parties, former Prime Minister Oli found enough ammunition from CMP since it lacks concrete and meaningful programs,

Instead of specific and targeted programs, the CMP talks about vague issues like protection against COVID, concluding Peace Process and Economic Development.

CMP says that it is prioritizing free COVID-19 vaccination to the people, the conclusion of the remaining tasks of the peace process, relief to the COVID hit businesses and workers, an amendment to the constitution as per the understanding among political parties, control of inflation, among others.

Instead of taking specific agenda, the CMP looks merely as a formality to show the solidarity among three major coalition partners. Although CPN- UML faction led by Madhav Kumar Nepal did not attend the program, it is reported that Nepal group also backs the CMP.

As the coalition was formed against CPN-UML leader Oli and his government, the CMP seems to be more focused on how to revamp the programs and priorities given by previous government. Announced following the presentation of CMP, the white paper of finance minister Janardan Sharma Prabhakar also is full of loaded criticisms against the policies followed by Oli government.

As the CMP expresses its commitments to amend the constitution to accommodate the views of Madhesh based parties, it needs to get support of CPN-UML for two third majorities. Given so much criticism against the policies and programs of outgoing government, taking support is likely to be impossible.

At a time when CPN-UML faction led by Madhav Kumar Nepal continues to maintain its affiliation with the party, the 3-party coalition government will have to face a difficult task to pass the budget and new policies and programs as it does not have majority.

The life of the government solely depends upon CPN-UML led Nepal faction. As former Prime Minister Oli has already made it clear that it will not tolerate violation of party whip any more, voting Deuba led government without splitting the party might cost the membership of the parliament.

In its recent verdicts, Constitutional Court has already defined that violating the party whip is tantamount to leaving the party or subject to eviction from the party as per the Anti-Defection Act.

Carefully consulting on the legal and constitutional issues regarding the provision of anti-defection act and observing the differences within the ruling factions, CPN-UML Chair Oli is looking for spots of weakness to attack the government.

Denouncing the CMP and policies of the Deuba led coalition government, former Prime Minister K.P. Sharma Oli took the rostrum of the House of Representatives. In his fluent and harsh words, Oli has shown that the main opposition party will not wait to unseat the government in case it seems failing to deliver.

Addressing the Parliament for the first time after the House was restored, Oli said Deuba was made the PM through a mandamus and not through people's mandate. He called the Deuba government a government of a selfish alliance.

He also accused Deuba of trying to undo the progress made by his government. Oli said that the early indications did not give reasons to predict that the government would do well.

“They said the government was acting with the motive of taking revenge against the opposition,” said Oli, questioning the government for not clearly saying what it would do with the Millennium Challenge Corporation (MCC) agreement which was signed with the US when the Nepali Congress and CPN-MC were partners in the government.

“The government had stated in the CMP that it would review unequal treaties and agreements, but did not clearly state which treaties or agreements were unequal,” said Oli. He said that the CMP did not reflect the values and norms that the Nepali Congress stood for.

CPN-UML leader Oli said that he would become the prime minister again with thumping majority and his party would establish political and administrative control over Limpiyadhura, Lipulekh and Kalapani after the next general election.

He said the CMP vaguely referred to border problems with neighbors without specifically mentioning the problems and the names of the neighbors.

"Eligible youths have not been able to get citizenship and passports due to lack of citizenship certificates. They are unable to get jobs. I urge the government to immediately pass the citizenship bill and other urgent bills," he said.

From accusing the Deuba led government on its approaches of foreign policy to criticizing economic policy and health policy, former PM Oli did not spare a chance to question the verdict of the court in removing him.

Accusing the Deuba led government as a government formed under a verdict of the court, former Prime Minister Oli made it clear that he is ready to face the people and come to power through their votes.