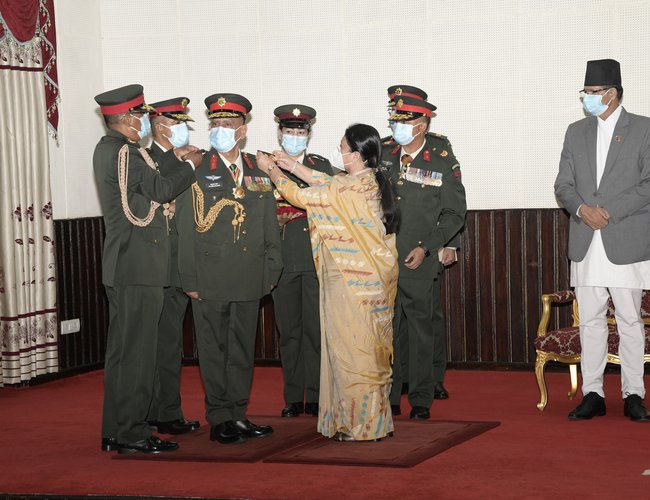 President Bhandari also administered the Oath of Office and Secrecy to Gen Sharma. 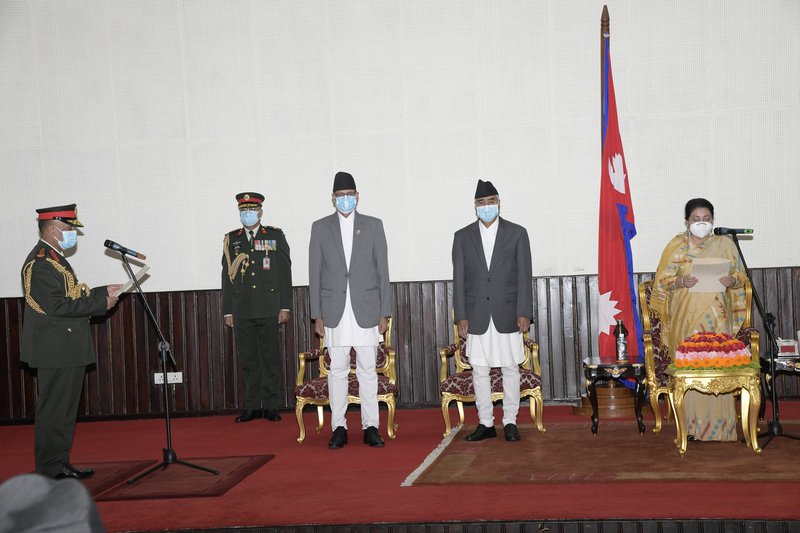 Earlier, a meeting of the Council of Ministers held on August 19, 2021, had decided to make the recommendation in accordance with Article 267, Sub Para (5) of the Constitution of Nepal.

Prime Minister, Chief Justice, Speaker of the House of Representatives, Chairman of National Assembly, Minister of Home Affairs, High-Level Government Officials, Heads of the Security Organisations and Generals of the Nepali Army were present at the ceremony.

COAS General Sharma received and reviewed a ‘Guard of Honour’ organized at the Army Headquarters before assuming office effective from today. COAS General Sharma also visited the Army Pavilion, Tundikhel and the Martyr’s Memorial in Chhauni and paid homage to the fallen heroes.

COAS General Sharma was commissioned into the Nepali Army as a Second Lieutenant in the year 1984 and was serving as the Chief of General Staff before picking up the current rank and appointment. 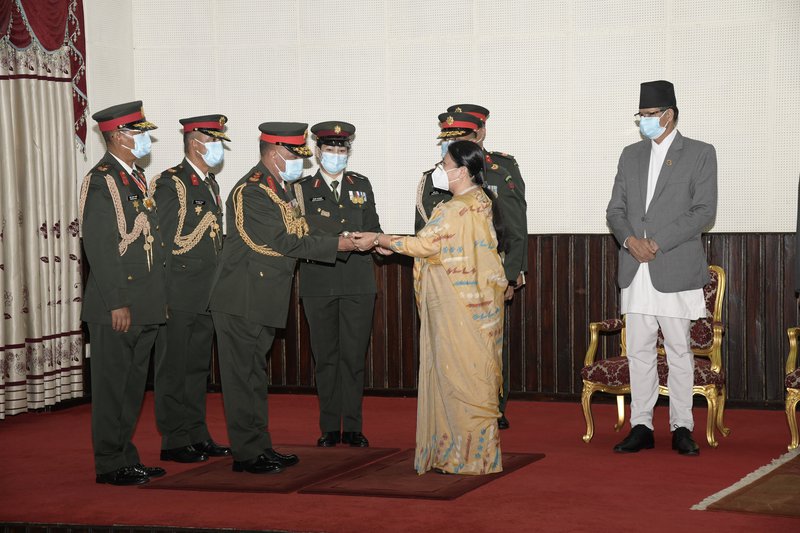 COAS General Prabhu Ram Sharma was born on 5th January 1964 in Kathmandu. A graduate of Nepali Army Academy, he was commissioned into the Purano Gorakh Battalion, one of the oldest Infantry Battalions in the Nepali Army. He completed his Company Command and Staff Course from the Nepali Army War College (1988-89) and Command and Staff Officers Course from Army Command and Staff College (1996-97) Nepal. Alumni of National Defense College in India, he holds a Master’s Degree in History from the Tribhuban University, Nepal, and a Master of Philosophy in Defense and Strategic Study from the University of Madras, India. In addition, he has completed the Technical Officer (TO) course from India. He has also participated in various seminars including in NESA Centre, Washington DC and attended the executive course in the APCSS (Asia Pacific Center for Strategic Studies) in Hawaii, United States. Gen Sharma is decorated by the prestigious SUPRABAL JANA SEWA SHREE. 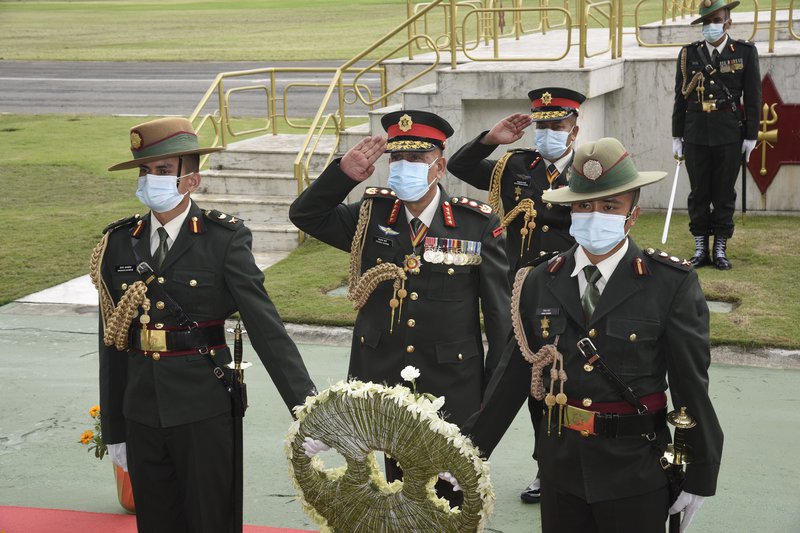 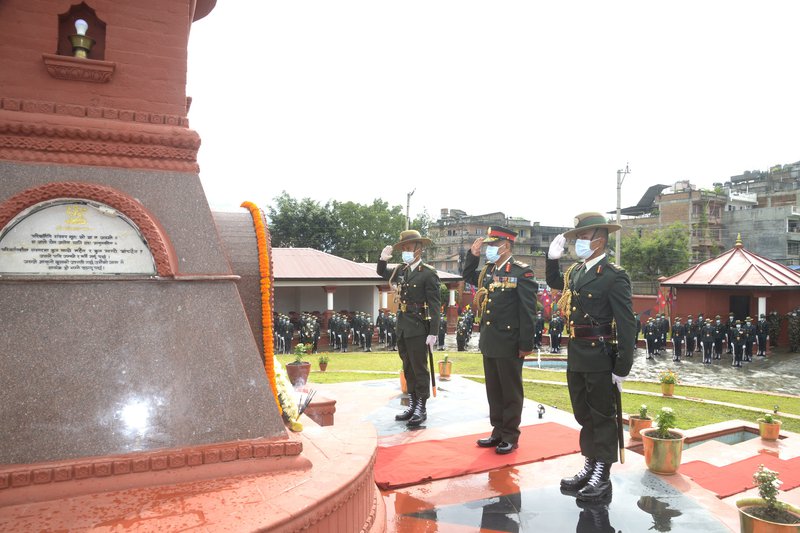 COAS General Sharma has held various command and staff appointments at home and abroad during his career. He has commanded an independent Infantry Company and an Infantry Battalion. He also holds the distinction of leading these units in UN Peacekeeping operations. He first led the infantry company in East Timor (UNTAET-3) in 2001 and the Infantry Battalion in the African Republic of the Congo (MONUSCO) in 2004. He has commanded two Infantry Brigades namely number 3 and 6 Infantry Brigades. Similarly, he successfully commanded the Mid Division in 2017 as the General Officer Commanding (GOC). 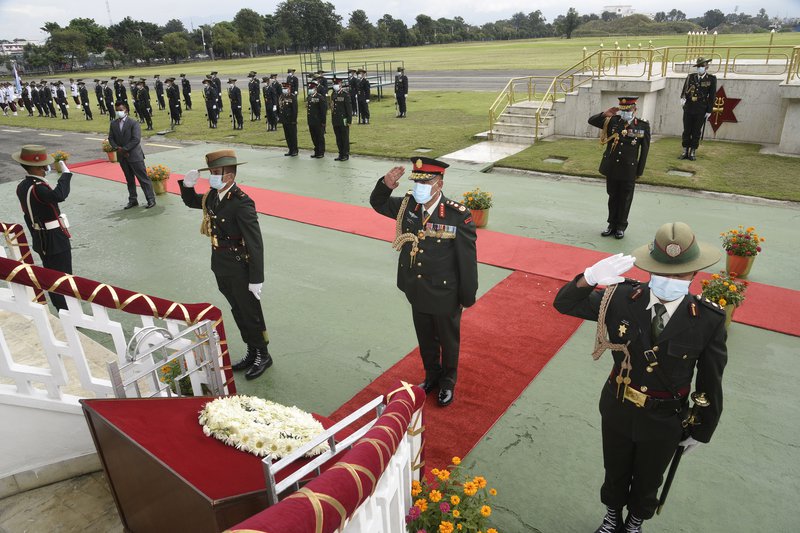 General Prabhu Ram Sharma is married to Mrs. Sunita Sharma and the couple is blessed with two daughters, Maunikshya and Shreya. Gen Sharma likes to travel in his leisure time.