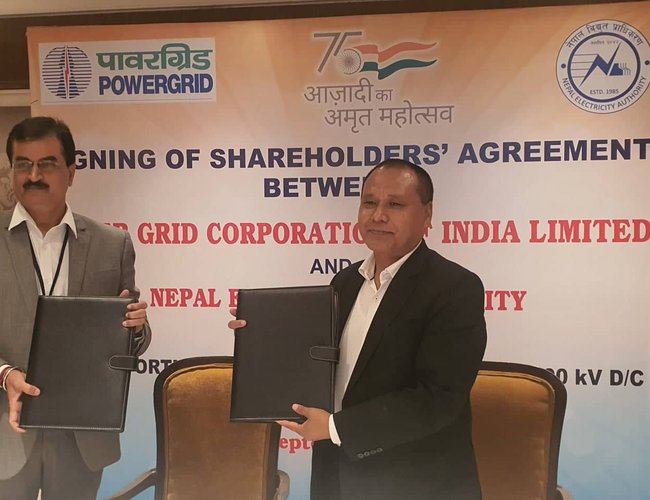 Nepal and India have agreed to collaborate for the development of the second transnational transmission line with the capacity of supplying around 20,000 megawatts of electricity.

According to the Nepal Electricity Authority (NEA), an investment agreement was signed between the two sides on Wednesday for the construction of the Butwal - Gorakhpur second transnational transmission line. The proposal to this regard was floated for a long, but no substantial progress was achieved.

NEA executive director Kulman Ghising confirmed the signing of a bilateral investment agreement in regard to the Butwal-Gorakhpur 400 KV transmission line. He was speaking to the RSS from New Delhi, India.

The transmission line is related to the US aid project Millennium Challenge Corporation (MCC) as well. The line to be originated from Nanglebhare of Kathmandu will reach Butwal to get connected with a substation to be built there. It will reach Gorakhpur via the same substation.

The August 3 meeting of the Council of Ministers had granted permission to the NEA to invest for 50 per cent share for establishing a company for the construction of the section of the transmission line to be developed towards India.

Executive director Ghising said the signing of the agreement has opened the way for the establishment of a joint company with 50-50 per cent share of NEA and Power Grid of India for the construction of the transmission line towards India.

The Butwal-Gorakhpur transmission line will prove to be the lifeline for power trade between the two countries, he added.

IFC Appointed Riccardo Puliti As Its New Regional Vice President For Asia And The Pacific By NEW SPOTLIGHT ONLINE 2 hours, 35 minutes ago

Finance Ministry Cut The Budget Of Purchasing Newspapers And Printing Under its Austerity Measures By Agencies 14 hours, 18 minutes ago

MD GHISING Leakage To Single Digit By A Correspondent 5 days, 8 hours ago

NRB'S DECISION Surrounding Controversy By A Correspondent 5 days, 11 hours ago