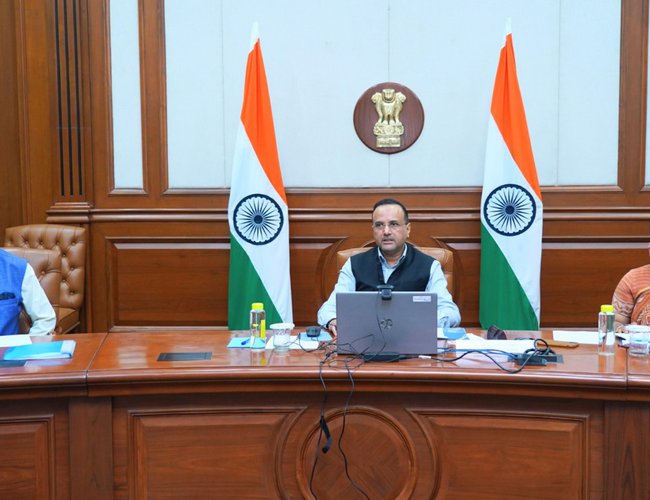 The 4th Joint Project Monitoring Committee (JPMC) JPMC meeting reviewed the overall implementation of the GOI-funded Terai Roads project in Nepal and expressed satisfaction at the good progress achieved with the completion of 13 out of 14 road packages. Both sides noted that despite the challenges posed by the Covid pandemic, the project has made good progress and is in the final stages of completion.

The JPMC meeting on the Strengthening of Road Infrastructure in the Terai Area of Nepal was held via video conferencing. Anurag Srivastava, Joint Secretary (Northern Division) of the Ministry of External Affairs of India and Keshab Kumar Sharma, Joint Secretary from Ministry of Physical Infrastructure and Transport of Nepal, co-chaired the fourth Joint Project Monitoring Committee (JPMC) meetings.

The government of India had committed NR 800 coror (INR 500 cr) in 2016 for the construction of 10 roads (divided into 14 packages/contracts) with a total length of 306 km in the Terai region of Nepal. These roads connect the East-West Highway to the Indian border, thereby increasing the ease of connectivity between the people of the two countries. Both sides noted that 13 out of 14 road packages have already been dedicated to the people of Nepal jointly by the Minister for Physical Infrastructure and Transport of the Government of Nepal and the Ambassador of India to Nepal on 31st March 2021.

During the meeting, the Nepali side thanked the Government of India for the continued support for the development of infrastructure in Nepal, particularly in the area of road connectivity. The Indian side expressed its happiness at the fruitful cooperation with the Government of Nepal and the joint efforts made towards strengthening connectivity infrastructure between the two countries.

According to a press release issued by the Embassy of India Kathmandu, the meeting was held in a friendly and cordial atmosphere with both the delegations agreeing that the next JPMC meeting would be held on a mutually convenient date as per requirement.

International Flights Resume At TIA By Agencies 1 day, 19 hours ago