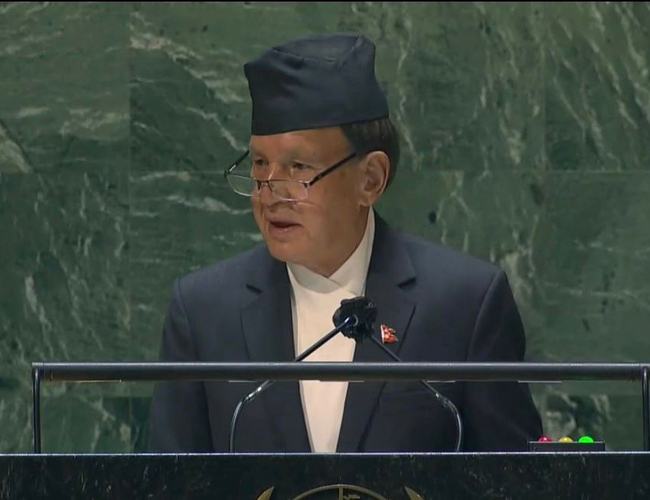 Dr. Narayan Khadka, Minister for Foreign Affairs and the Head of Nepali delegation, said that Nepal’s relations with neighbors and all other countries are based on the principles and purposes of the UN Charter, non-alignment, international law and norms of world peace outlining Nepal’s foreign policy priorities.

In his address to the 76th session of the United Nations General Assembly in New York, the Foreign Minister highlighted the devastating impacts of the COVID-19 pandemic and said that the crisis has brought the world to a grinding halt, devastated the global economy, pushed an additional 150 million people into extreme poverty, and threatened to reverse hard-earned development gains. Nowhere is this distinctly visible than in the most weak and vulnerable countries where people remain deprived of access to basic civic amenities, he added.

The Minister appreciated the efforts made by the international community including the United Nations system to address the challenges posed by COVID-19 and underscored to ensure fair and equitable access to vaccines for everyone, everywhere. Vaccines must be declared as public goods for the benefit of people’s lives, he stressed.

He also highlighted Nepal’s efforts to build a sustainable and resilient recovery from the pandemic and thanked India, China, United States, Britain, Japan and others for providing vaccines, critical medical equipment, and medicines in fight against the pandemic.

The Foreign Minister expressed concerns about the situation in Afghanistan, Myanmar, Libya, Syria, Yemen and the Middle East and urged all parties involved to ensure peace, security, and stability and fundamental rights and freedom of the people. 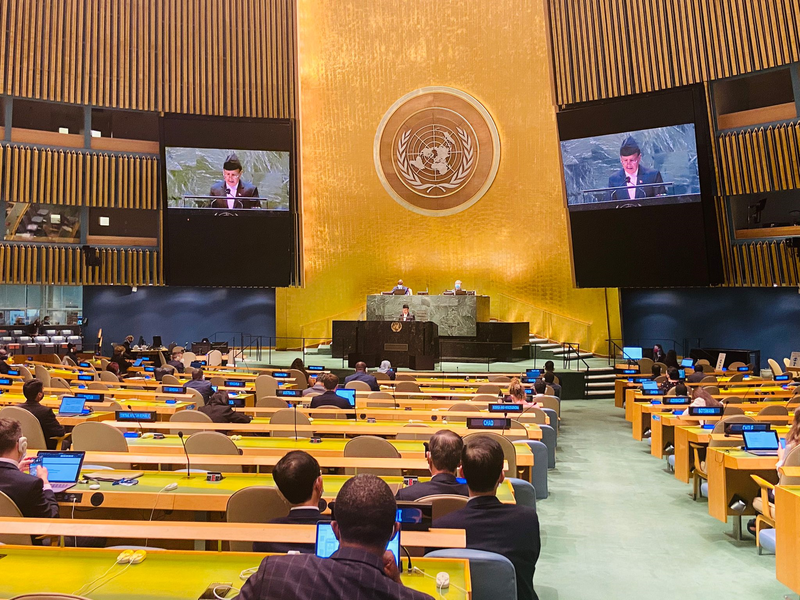 While sharing Nepal’s principled position on peace, security, disarmament, terrorism, human rights, sustainable development, climate change, the Foreign Ministercondemned terrorism in all its forms and manifestations, called for general and complete disarmament of all weapons of mass destruction in a time-bound and verifiable manner, highlighted the importance of promotion and protection of human rights and fundamental freedoms, ensured resilient recovery and building back better and stronger for achieving SDGs. He reiterated Nepal’s commitment to delivering climate-resilient development pathways by 2030 and net-zero emissions by 2050 and said that the climate ambition of developing countries must be met with easier access to adequate financial and technological support for adaptation and mitigation.

Referring to Nepal’s contribution to the UN peace operations to promote peace, security, and stability, he underlined the importance of safety, security and dignity of peacekeepers as well as the need for adequate training, resources, and modern technologies.

The Minister also highlighted the structural impediments facing the vulnerable countries like LDCs and LLDCs and said that they need reliable and sustainable financing, partnerships, and technology transfer to overcome these challenges.

Nepal’s plan to graduate from the LDC category by 2026 as an opportunity to bring structural transformation and make the long-held national aspiration of graduation smooth, sustainable, and irreversible, he stated. The forthcoming LDC5 must be built on the unfinished business of IPOA, with a commitment to support the graduating countries with adequate measures, he added. He emphasized that the ongoing COVIDcrisis must not be a pretext for retracting from ODA commitments.

He welcomed the steps taken by the IMF and G20 on debt relief and debt service suspension and called for a reformed and more equitable international debt restructuring to address the debt crisis of low-income countries.

He underlined the indispensability of multilateralism with the United Nations as its centre and underlined that this is the only way to build global understanding and cooperation, promote shared interests, and secure our common future.

He expressed Nepal’s support on the measures and initiatives taken for UN reforms and stressed the need for a more representative, inclusive, and transparent Security Council and a more revitalized General Assembly.

Highlighting Nepal and UN partnership- driven by trust, cooperation, and mutual respect, the Foreign Minister thanked the UN for its continued support in Nepal’s development endeavors.

The Minister said that time is now to turn crisis into opportunity, despair into hope, and risk into resilience and emphasized building a stronger, interconnected, and inclusive multilateral system grounded in cooperation, solidarity and mutual trust. We must rise to our responsibility to re-build for the sake of the people we serve and the planet we live in, he further emphasized.

The General Debate of the 76th Session of UNGA is being held at UN Headquarters in New York from 21 to 27 September under the theme Building resilience through hope-to recover from COVID 19, rebuild sustainably, respond to the needs of the planet, respect the rights of people, revitalize the United Nations.

On the sidelines today, Hon. Minister met with Under Secretary-General for Operational Support Atul Khare. The discussion was focused on strengthening cooperation between Nepal and the UN in the field of UN peacekeeping.

The Minister also had a bilateral meeting with his counterpart of Bahrain Dr. Abdullatif bin Rashid Al Zayani. The two sides discussed various matters of bilateral cooperation in the fields of human resources, trade, investment and tourism.