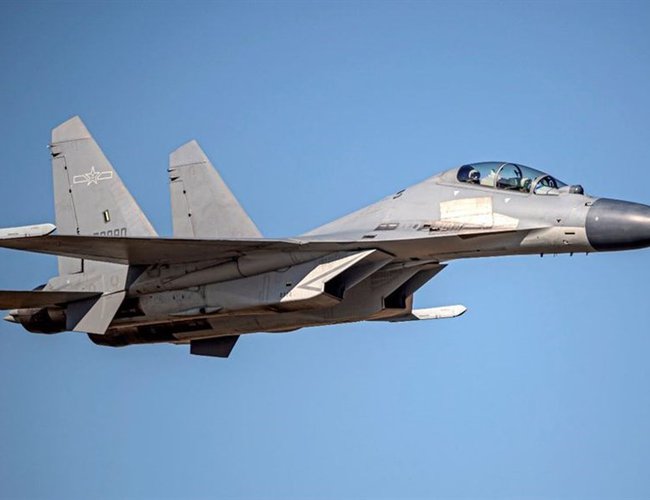 The number of such incidents has spiked since October 1, when China observes its national foundation day.

Taiwan's defense ministry says a total of 150 fighters, bombers and other aircraft entered the zone over waters southwest of Taiwan in the first five days of October.

On Monday, 56 aircraft entered the zone, during both daylight and nighttime hours. That was the highest figure recorded in a single day since the ministry began releasing such numbers in September 2020.

Taiwan's Premier Su Tseng-chang said on Tuesday that China is becoming "more over the top," and that "the world has also seen the country's repeated violations of regional peace and oppression of Taiwan."

He said Taiwan must strengthen itself and be united so as not to allow China to easily use force.

Defense Minister Chiu Kuo-cheng said the frequent entry by Chinese military aircraft is applying very heavy pressure on Taiwan's air force and air defense corps. He said, however, the pressure is giving Taiwan power, and is encouraging it to be prepared for fighting.

Chieh Chung of Taiwan's National Policy Foundation says these moves suggest China has more mainstay fighters in its fleet, and has improved its capability for carrying out multi-unit operations and night flights.

China's state-run CCTV has reported on the incidents.
It says Chinese military personnel patrolled areas near Taiwan for 4 days in a row, foregoing their chance to enjoy the National Day holiday. CCTV quoted an expert as saying the flights showed China's resolution and its military capability.

The electronic version of The Global Times newspaper, which is affiliated with the Chinese Communist Party, carried an editorial on Monday saying that the operation was a warning to Taiwan's President Tsai Ing-wen, who is strengthening ties with the United States.

The article says the military's drills are "no longer limited to declaring China's sovereignty over the island," but to putting in place preparations "to take back the island of Taiwan."

It says efforts toward achieving "a peaceful reunification" have not been given up, but that it has become mainstream public opinion on the Chinese mainland that Beijing "should make earnest preparations based on the possibility of combat."

China has blamed the United States for the tensions due to its arms sales and support for the island.

In a sign of the fraught atmosphere, a security source confirmed reports in Taiwanese media that a Chinese pilot responded to a radio warning to fly away on Sunday with an expletive.

China’s Defence Ministry did not respond to a request for comment.

Australia’s Department of Foreign Affairs said it too was concerned by China’s increased air incursions.

“Resolution of differences over Taiwan and other regional issues must be achieved peacefully through dialogue and without the threat or use of force or coercion,” it said.

Taiwan has lived under the threat of invasion since the defeated Republic of China government fled to the island in 1949 after losing a civil war with the Communists. No peace treaty or armistice has ever been signed.

Taiwanese people are well used to China’s threats and there has been no sign of panic on the island because of the stepped up military activity, nor undermining of investor confidence on the stock market.