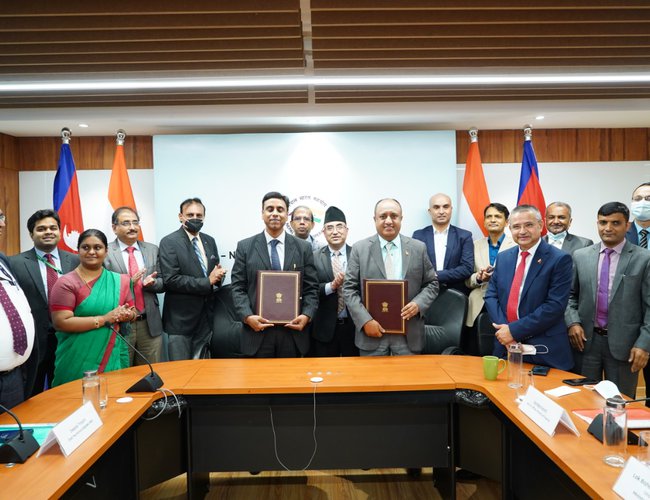 
Both sides signed the Standard Operating Procedures (SOPs) for start of passenger train services on the Jaynagar-Kurtha section and the Memorandum of Understanding (MoU) for Final Location Survey (FLS) of the proposed broad gauge railway line between Raxaul and Kathmandu. The SOPs provide the technical aspects of running passenger trains on the new section and will serve as a guiding document for early start of rail services in the upcoming cross-border railway links with Nepal. The proposed Raxaul-Kathmandu broad gauge railway line will further boost connectivity between India and Nepal.


According to a press release issued by Embassy of India Kathmandu, both sides discussed the ongoing works of Jaynagar-Bijalpura-Bardibas and Jogbani-Biratnagar broad gauge railway lines between India and Nepal, being developed with grant assistance from Government of India. The technical preparedness of the completed 34 km long section of the railway line, from Jaynagar (India) to Kurtha (Nepal) for operationalization of passenger train services was also reviewed. Nepali side also informed that necessary regulatory framework will be put in place to facilitate early operationalization. For Kurtha to Bilajpura (17.25 km) section of the railway line, Nepal side assured to provide necessary facilitation for completion of the work at the earliest. Both sides also agreed to expedite the work on completion of the 18.6 km long Jogbani-Biratnagar rail link, and its early operationalization.


The progress on Raxaul-Kathmandu Broad Gauge Railway Link and Phase-II railway link projects were also discussed. Both sides agreed to enhance technical cooperation in the railway sector, including in the areas of capacity building, logistic support and training of Nepali railway personnel.

Nepal Has Huge Potential As A Producer Of Green Energy: British Ambassador Pollitt By NEW SPOTLIGHT ONLINE 29 minutes ago